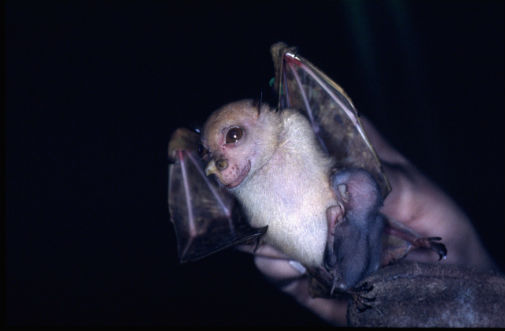 A fruit bat originally dubbed “Yoda” is finally being recognized with an official name.

A researcher from the University of York officially registered the bat—which is native to Papua New Guinea— and dubbed it the happy (Hamamas) tube-nosed fruit bat, after it was previously nicknamed “Yoda” due to its resemblance to the Star Wars character.

“The species is very difficult to tell apart from other tube-nosed bat species,” Nancy Irwin, Ph.D., an honorary research fellow in York’s Department of Biology, said in a statement. “Bat species often look similar to each other but differ significantly in behavior, feeding and history. Most of the morphological characteristics that separate this bat from other species are associated with a broader, rounder jaw which gives the appearance of a constant smile. Since most remote Papuans have never seen Star Wars, I thought it fitting to use a local name: the Hamamas—meaning happy—tube-nosed fruit bat.”

The bat is characterized by a tube nose, bright colors, a thick stripe on its back and spots.

Nyctimene were one of the earliest bat species ever recorded. Records dating back to 1769 first identified the species, and British naturalist Alfred Russel Wallace collected two further species of Nyctimene in 1860.

Researchers continue to find new hidden species within the group.

“There were no illustrations of the cyclotis group of bats which made identifying bats really difficult,” Irwin said. “So difficult was it that Papua New Guinea produced stamps illustrating the bats but could not allocate a species name.

“Now, with photographs, illustrations and a key of the other species in the group, it makes it possible to distinguish between three species of the group,” she added. “Taxonomy is often the forgotten science but until a species is recognized and has a name, it becomes difficult to recognize the riches of biodiversity and devise management.”

According to Irwin, fruit bats are important to the health of the rainforest because they pollinate and disperse many tree species.