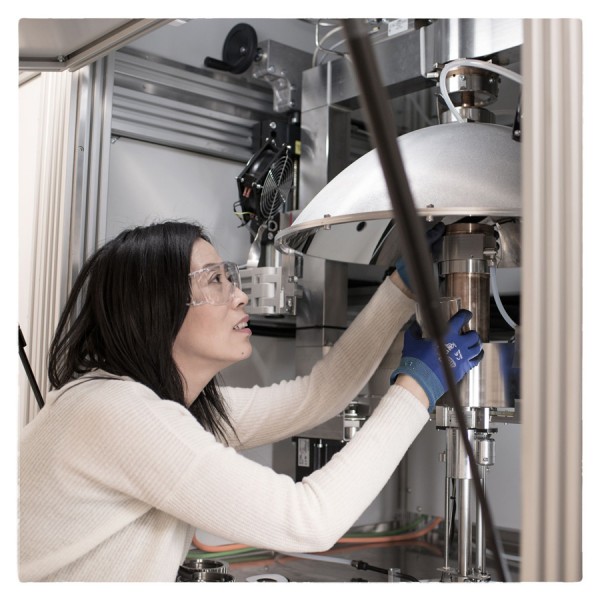 Hong Zheng, principal materials engineer in Argonne’s Materials Science Division, prepares for crystal growth in the high-pressure optical image zone furnace. The apparatus is one of few in the world that can create the extreme conditions needed to grow single crystals of the nickel oxide compound Pr4Ni3O8.

A team of researchers at the U.S. Department of Energy’s (DOE) Argonne National Laboratory has identified a nickel oxide compound as an unconventional but promising candidate material for high-temperature superconductivity.

The team successfully synthesized single crystals of a metallic trilayer nickelate compound, a feat the researchers believe to be a first.

This nickel oxide compound does not superconduct, said John Mitchell, an Argonne Distinguished Fellow and associate director of the laboratory’s Materials Science Division, who led the project, which combined crystal growth, X-ray spectroscopy, and computational theory. But, he added, “It’s poised for superconductivity in a way not found in other nickel oxides. We’re very hopeful that all we have to do now is find the right electron concentration.”

Mitchell and seven co-authors announced their results in this week’s issue of Nature Physics.

Superconducting materials are technologically important because electricity flows through them without resistance. High-temperature superconductors could lead to faster, more efficient electronic devices, grids that can transmit power without energy loss and ultra-fast levitating trains that ride frictionless magnets instead of rails.

But after three decades of ensuing research, exactly how cuprate superconductivity works remains a defining problem in the field. One approach to solving this problem has been to study compounds that have similar crystal, magnetic and electronic structures to the cuprates.

Nickel-based oxides – nickelates – have long been considered as potential cuprate analogs because the element sits immediately adjacent to copper in the periodic table. Thus far, Mitchell noted, “That’s been an unsuccessful quest.” As he and his co-authors noted in their Nature Physics paper, “None of these analogs have been superconducting, and few are even metallic.”

The nickelate that the Argonne team has created is a quasi-two-dimensional trilayer compound, meaning that it consists of three layers of nickel oxide that are separated by spacer layers of praseodymium oxide.

This nickelate and a compound containing lanthanum rather than praseodymium both share the quasi-two-dimensional trilayer structure. But the lanthanum analog is non-metallic and adopts a so-called “charge-stripe” phase, an electronic property that makes the material an insulator, the opposite of a superconductor.

“For some yet-unknown reason, the praseodymium system does not form these stripes,” Mitchell said. “It remains metallic and so is certainly the more likely candidate for superconductivity.”

Argonne is one of a few laboratories in the world where the compound could be created. The Materials Science Division’s high-pressure optical-image floating zone furnace has special capabilities. It can attain pressures of 150 atmospheres (equivalent to the crushing pressures found at oceanic depths of nearly 5,000 feet) and temperatures of approximately 2,000 degrees Celsius (more than 3,600 degrees Fahrenheit), conditions needed to grow the crystals.

“We didn’t know for sure we could make these materials,” said Argonne postdoctoral researcher Junjie Zhang, the first author on the study. But indeed, they managed to grow the crystals measuring a few millimeters in diameter (a small fraction of an inch).

The research team verified that the electronic structure of the nickelate resembles that of cuprate
materials by taking X-ray absorption spectroscopy measurements at the Advanced Photon Source, a DOE Office of Science User Facility, and by performing density functional theory calculations. Materials scientists use density functional theory to investigate the electronic properties of condensed matter systems.

“I’ve spent my entire career not making high-temperature superconductors,” Mitchell joked. But that could change in the next phase of his team’s research: attempting to induce superconductivity in their nickelate material using a chemical process called electron doping, in which impurities are deliberately added to a material to influence its properties.

Funding was provided by the U.S. Department of Energy, Office of Science and the National Science Foundation.