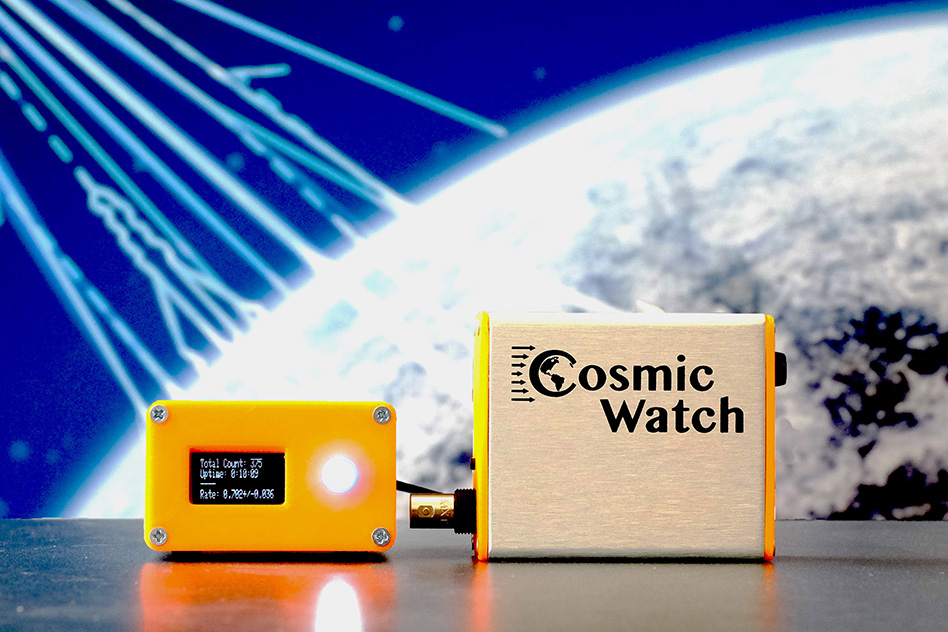 Physicists at MIT have designed a pocket-sized cosmic ray muon detector to track these ghostly particles. Courtesy of the researchers

Muons last only fractions of a second, and during their fleeting lifespan they can be found through every layer of the Earth’s atmosphere, circulating in the air around us and raining onto the surface at a rate similar to a light drizzle. A small fraction of muons can even penetrate the Earth’s surface and travel several kilometers through rock and ice.

Now physicists at MIT have designed a pocket-sized cosmic ray muon detector to track these ghostly particles. The detector can be made with common electrical parts, and when turned on, it lights up and counts each time a muon passes through. The relatively simple device costs just $100 to build, making it the most affordable muon detector available today.

The researchers, led by Spencer Axani, a graduate student in MIT’s Department of Physics, have designed the detector with students in mind. They have started an outreach program called CosmicWatch, with a website that lists parts to purchase and detailed instructions on how to assemble, calibrate, and run the detector. The team estimates that an average high school student should spend about four hours building a detector for the first time, and just one hour building it a second time.

Once up and running, detectors can be carried around to measure muon rates in virtually any environment. The team has helped supply nearly 100 detectors to high school and college students, who have sent the instruments up in planes and weather balloons to measure muon rates at high altitudes. Students have also, as Axani has done, taken the detectors underground.

“You get funny looks when you take particle detectors into the subway, but we did that in Boston,” Axani says. “Since the muon rate will decrease the further down you go, we put the detectors in a subway station to measure how far underground we were.”

The researchers have published the first version of the detector design in the American Journal of Physics. Axani’s co-authors are MIT professor of physics Janet Conrad and junior Conor Kirby. Details regarding their latest version can be found on the CosmicWatch webpage.

Scientists at the observatory proposed that a small muon detector might be inserted into PINGU (Precision IceCube Next Generation Upgrade), a proposed array that would increase the detector’s sensitivity to low-energy neutrinos. Small muon detectors, buried in such an array, would be able to tag the precise position of muons, enabling scientists to sift out those particles in their search for neutrinos.

Axani took on the task of designing a prototype muon detector for use in PINGU. Typical muon detectors consist of photomultiplying tubes lined with a scintillator, a material that emits light when struck by a charged particle. When a particle such as a muon bounces through the detector, the photomultiplying tube multiplies the current produced by the emitted light. In this way, even a single photon can make a current large enough that it can be measured. This is used to determine whether a muon or other particle has passed through the detector.

While most lab-scale muon detectors are made from large, bulky photomultipliers and even larger batteries to power them, Axani looked for ways to shrink the design.

After digging through discarded electronics equipment at MIT, he found the components he needed to build a much thinner device, requiring very little power.

He also designed simple electronics and software components to display the number of muons passing through the detector, making the detector a self-contained measurement and readout instrument.

Since Axani first attempted to design a prototype, his project has morphed into more of an outreach effort, as he’s realized the components used to build the detector are relatively common, easily accessible, and simple to assemble — all ideal qualities for teaching students hands-on particle physics.

He, Conrad, and a colleague at the National Center for Nuclear Research in Poland, K. Frankiewicz, have assembled kits for students, which can be used to build individual handheld detectors about the size of a large cellphone. Each kit includes a piece of plastic scintillator, a SensL silicon photomultiplier, an Arduino Nano, a readout screen, a custom-designed printed circuit board, and a 3-D-printed casing, available in a rainbow of colors.

The team has supplied kits to students at the University of Warsaw in Poland, as well as the Missouri University of Science and Technology, where students have built an array of the detectors and sent them up in weather balloons to measure muons at high altitudes. Students have also taken the detectors onto planes to measure the different muon counts at various altitudes.

“At sea level, you might see one count every two seconds at sea level, but on a plane at cruising altitude, that rate increases by about a factor of 50 — a dramatic change,” Axani says. “From the measured rate you can back-calculate what the actual altitude of the plane was.”

A group at Boston University is also investigating the possibilities of placing the muon detectors in suborbital rockets, reaching altitudes of 100,000 feet.

“When you get up high enough, you get out of the muon production region of cosmic rays, and you can start seeing the turnover, where rates of muons increase at a certain altitude and then start decreasing beyond a certain altitude,” Conrad says.

Eventually, the researchers would like to apply their pocket detector as a means of muon tomography, a technique that uses the distribution of muons to create a three-dimensional image of the amount of material surrounding a detector. Scientists in the past have used muon tomography instruments, much like X-rays or CT scans, to uncover geological structures, the most famous of which was an effort in the 1960s to search for hidden chambers in the Pyramid of Chephren, in Giza.

“That’s something I’d like to try out at some point, maybe to map out the office on the floor above me,” Axani says. “For now I like to take these detectors in my briefcase and measure the muon rate when I’m travelling.”

The researchers will continue to offer kits on the CosmicWatch website, along with instructions for how to assemble and apply them. They also hope to collect feedback from students and educators who have used the kits.

“This is a really neat example of how pretty esoteric physics can produce something which is directly useful,” Conrad says.