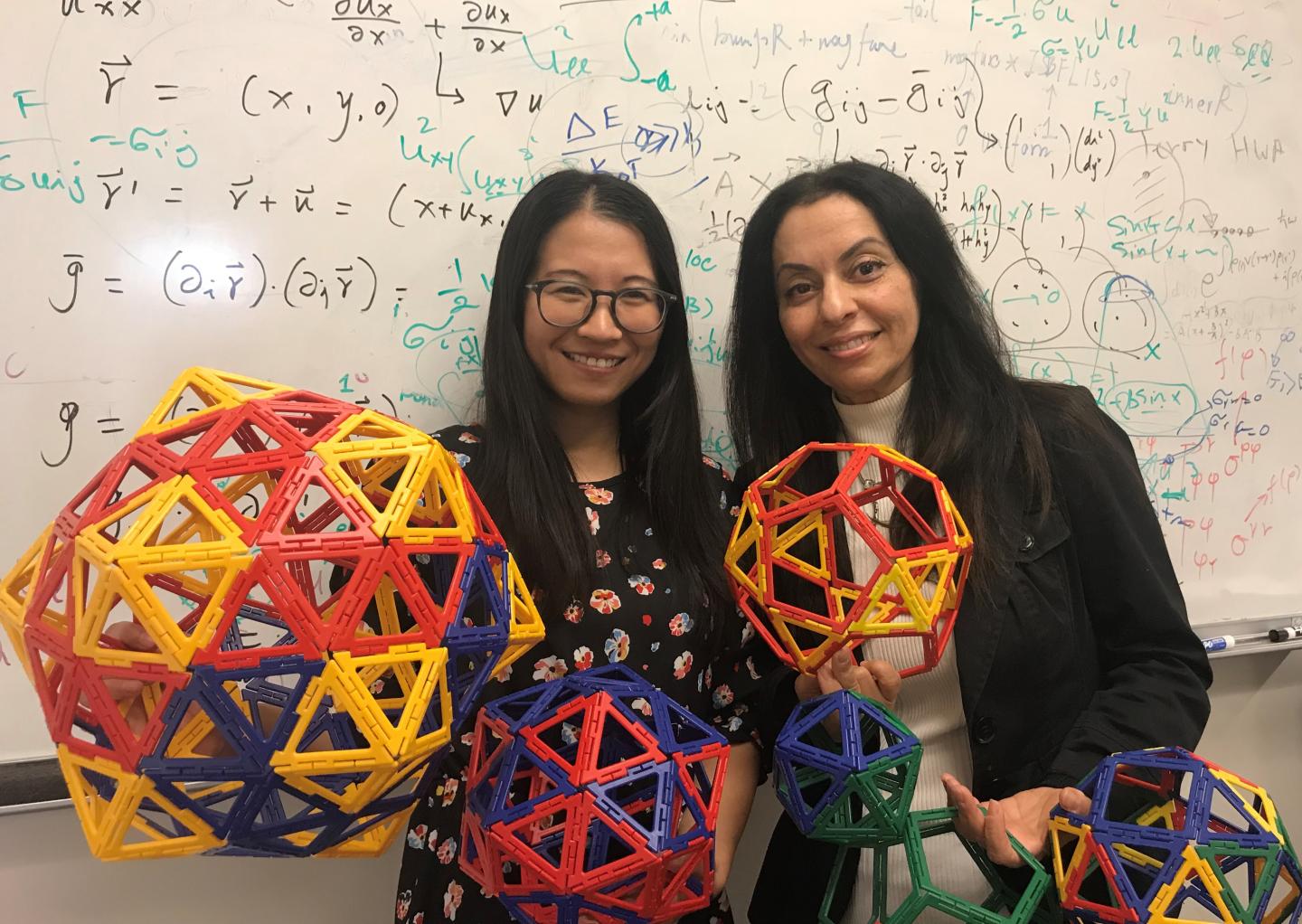 Siyu Li (left) is a graduate student in the lab of Roya Zandi, a professor of physics at UC Riverside. They are seen here holding various icosahedral structures. Credit: I. Pittalwala, UC Riverside.

A virus, the simplest physical object in biology, consists of a protein shell called the capsid, which protects its nucleic acid genome — RNA or DNA.  The capsid can be cylindrical or conical in shape, but more commonly it assumes an icosahedral structure, like a soccer ball.

Capsid formation is one of the most crucial steps in the process of viral infection. If the virus is small, the capsid forms spontaneously.  Larger spherical viruses, however, such as the herpes simplex virus or infectious bursal disease virus, need the assistance of naturally produced “scaffolding proteins,” which serve as a template guiding the capsid’s formation. How these large viral shells assemble into highly symmetric structures is not well understood.

A team of physicists and a virologist, led by a scientist at the University of California, Riverside, has now published a research paper in the Proceedings of the National Academy of Sciences explaining how large virus shells are formed.  Their work can also be used to explain how large spherical crystals form in nature.

Relying on a theory called the continuum elasticity theory, the researchers studied the growth of large spherical capsids. They showed that the template guides the formation of the capsid’s protein subunits – the individual building blocks of the shell — in a way that is error-free and results, ultimately, in a highly symmetric, stable icosahedral structure.

“As the spherical structure grows, we see deep potential wells — or affinities — at mathematically specified locations that later become the vertices of the icosahedral structure,” said Roya Zandi, a professor of in the UCR Department of Physics and Astronomy, who led the research project. “In the absence of this template provided by the scaffolding proteins, the protein subunits often assemble into smaller, less stable structures.”

The study includes computer simulations and complex mathematics — specifically, topology, which is the mathematical study of the properties of a geometric figure or solid that are not changed by stretching or bending. It explains at a fundamental level what role the mechanical properties of building blocks and scaffolding proteins play in the formation of capsids. For large capsids to assume stable icosahedral structures, the protein subunits need to have specific physical properties. Further, an interaction between the protein subunits and a template is necessary, the researchers posit.

An icosahedron is a geometrical structure with 12 vertices, 20 faces, and 30 sides. An official soccer ball is a kind of icosahedron, called truncated icosahedron; it has 32 panels cut into the shape of 20 hexagons and 12 pentagons. It has 60 vertices and 90 edges. The pentagons are separated from each other by hexagons. All icosahedral structures, regardless of size, must have only 12 pentagons.

Zandi explained an icosahedron by invoking the Thomson Problem, which states that point charges placed on the surface of a unit sphere will minimize the total energy of the system. Solutions to the problem place each point charge in such a way that its nearest neighbors are as far away as possible.

“If you have a spherical conductor and you put 12 electrons on it, they will want to be as far as possible from each other,” she said. “They end up on the vertices of an icosahedron. Given this knowledge, when a virus shell grows, then, based on the theory of elasticity, you will need at least 12 defective points, called disclinations. Imagine if you had to wrap a sheet of paper around a sphere. You would be forced to fold the paper at certain points for it to assume the spherical shape. These are points of disclination, and they cannot be avoided. If you were to make a spherical shell using small triangles, you would need to make 12 pentagons. Without 12 pentagons, a spherical shape is not possible.”

Zandi stressed that to attack viruses more effectively a solid understanding of how they form is required, which can inform researchers of better ways to interrupt their formation and thus contain the spread of viral diseases.

“When a virus is large, how do the protein subunits know how to arrange themselves to form the most stable shell possible — an icosahedral one?” she added. “Where should the first disclination appear? And what about the next one? How can thousands of protein subunits join together and form icosahedral structures with such precision and symmetry? And what is the role of scaffolding proteins? Why can large stable shells not form without scaffolding proteins? These questions guided our research.”

Zandi explained that each protein subunit has a bending energy, meaning that a subunit prefers to meet another subunit at a certain angle. For a small icosahedral structure, this angle is small and acute. But to form a large icosahedral structure or capsid, this angle is large and obtuse, and requires the assistance provided by scaffolding proteins. Without this assistance, the protein subunits would form an endless long tube because that effort requires less energy.

“We show now that this tendency is thwarted by the scaffolding proteins, which force the protein subunits to bend slightly, buckle up and form 12 pentagons, which then leads to the formation of an icosahedral structure,” Zandi said. “Our study proves that without this scaffolding, it is impossible to form a large highly stable icosahedral shell.”

Viruses are the best nano-containers, Zandi said.  They can be used to deliver drugs to specific targets in the body because they are especially adept at reaching cells. For example, viruses can be made to transport cargo, such as genomes and drugs, for therapeutic purposes to cancer cells.

“Anti-assembly drugs may be more efficient than other drugs because viral fitness is in particular sensitive to mutations at specific assembly interfaces,” Zandi said. “Indeed, small molecules have been recently designed that prohibit replication of certain viruses by similar mechanisms.”

Viruses do not breathe, metabolize, or grow.  But they do reproduce.  The simplest virus has a shell of 60 protein subunits.  Three asymmetric subunit proteins occupy each triangular face, and all of the 60 subunits are equivalent to one another.  For complex viruses, the number of subunits is a multiple of 60.

The study was funded by a grant from the National Science Foundation.

Zandi was joined in the research by Siyu Li of UCR; virologist Polly Roy of the London School of Hygiene and Tropical Medicine, United Kingdom; and Alex Travesset of Iowa State University. Li, a graduate student in Zandi’s lab, is the research paper’s first author.