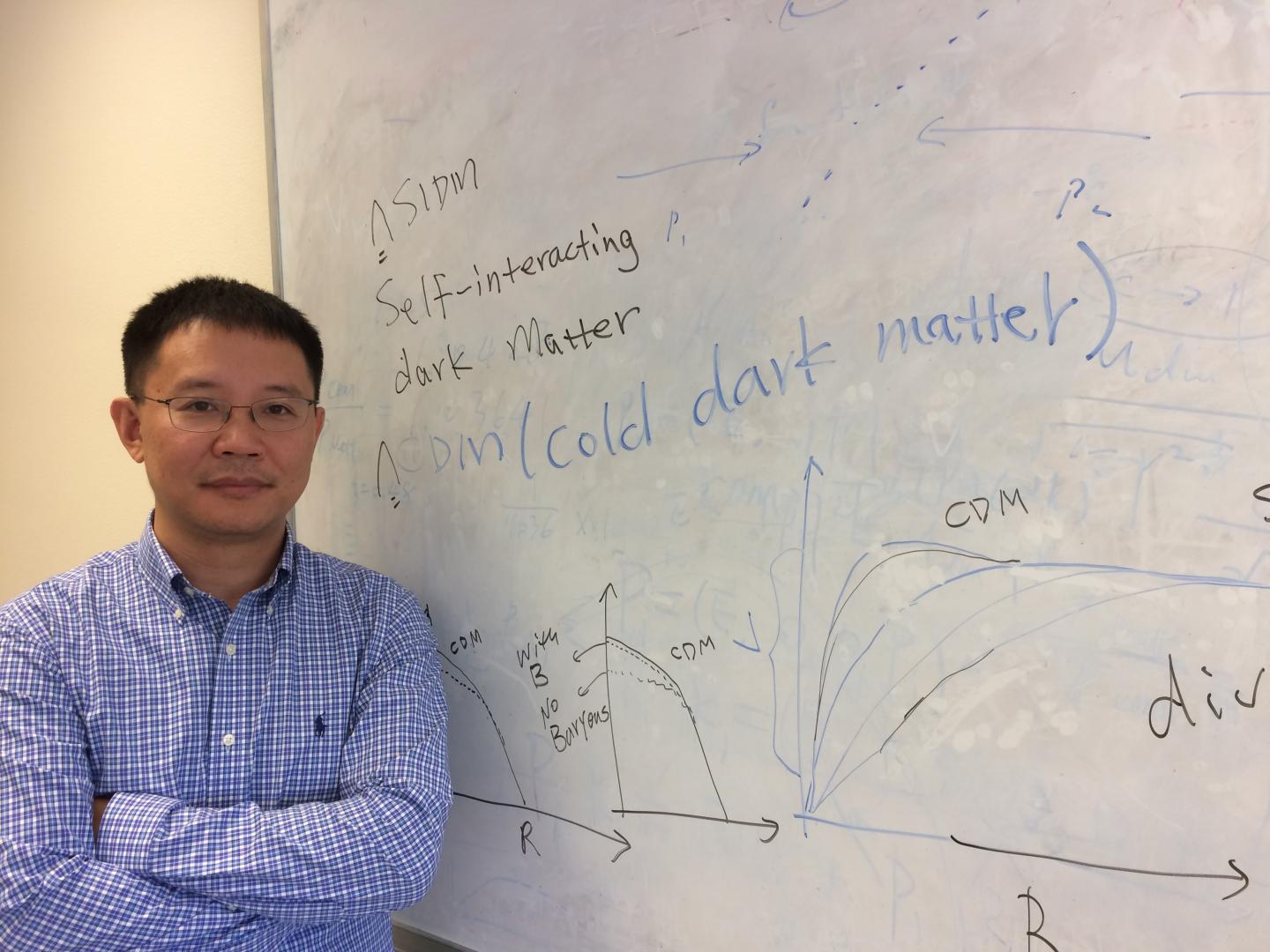 Hai-Bo Yu is an assistant professor of theoretical particle physics and astrophysics at UC Riverside. Credit: I. Pittalwala, UC Riverside.

Identical twins are similar to each other in many ways, but they have different experiences, friends, and lifestyles.

This concept is played out on a cosmological scale by galaxies. Two galaxies that appear at first glance to be very similar and effectively identical can have inner regions rotating at very different rates – the galactic analog of twins with different lifestyles.

A team of physicists, led by Hai-Bo Yu of the University of California, Riverside, has found a simple and viable explanation for this diversity.

Every galaxy sits within a dark matter halo that forms the gravitational scaffolding holding it together. The distribution of dark matter in this halo can be inferred from the motion of stars and gas particles in the galaxy.

Yu and colleagues report in Physical Review Letters that diverse galactic-rotation curves, a graph of rotation speeds at different distances from the center, can be naturally explained if dark matter particles are assumed to strongly collide with one another in the inner halo, close to the galaxy’s center – a process called dark matter self-interaction.

Yu explained that the dark matter collisions take place in the dense inner halo, where the luminous galaxy is located. When the particles collide, they exchange energy and thermalize. For low-luminous galaxies, the thermalization process heats up the inner dark matter particles and pushes them out of the central region, reducing the density, analogous to a popcorn machine in which kernels hit each other as they pop, causing them to fly up from the bottom of the machine. For high-luminous galaxies such as the Milky Way, thermalization pulls the particles into the deep potential well of the luminous matter and increases the dark matter density. In addition, the cosmological assembly history of halos also plays a role in generating the observed diversity.

“Our work demonstrates that dark matter may have strong self-interactions, a radical deviation from the prevailing theory,” Yu said. “It well explains the observed diversity of galactic rotating curves, while being consistent with other cosmological observations.”

Dark matter makes up about 85 percent of matter in the universe, but its nature remains largely unknown despite its unmistakable gravitational imprint on astronomical and cosmological observations. The conventional way to study dark matter is to assume that it has some additional, nongravitational interaction with visible matter that can be studied in the lab. Physicists do not know, however, if such an interaction between dark and visible matter even exists.

Yu posited the new dark force would affect the dark matter distribution in each galaxy’s halo. He realized that there is indeed a discrepancy between CDM and astronomical observations that could be solved if dark matter is self-interacting.

“The compatibility of this hypothesis with observations is a major advance in the field,” said Flip Tanedo, an assistant professor of theoretical particle physics at UC Riverside, who was not involved in the research. “The SIDM paradigm is a bridge between fundamental particle physics and observational astronomy. The consistency with observations is a big hint that this proposal has a chance of being correct and lays the foundation for future observational, experimental, numerical, and theoretical work. In this way, it is paving the way to new interdisciplinary research.”

SIDM was first proposed in 2000 by a pair of eminent astrophysicists. It experienced a revival in the particle physics community around 2009, aided in part by key work by Yu and collaborators.

“This is a special time for this type of research because numerical simulations of galaxies are finally approaching a precision where they can make concrete predictions to compare the observational predictions of the self-interacting versus cold dark matter scenarios,” Tanedo said. “In this way, Hai-Bo is the architect of modern self-interacting dark matter and how it merges multiple different fields: theoretical high-energy physics, experimental high-energy physics, observational astronomy, numerical simulations of astrophysics, and early universe cosmology and galaxy formation.”

The research paper is included by Physical Review Letters as a “Editor’s Suggestion” and featured also in APS Physics.