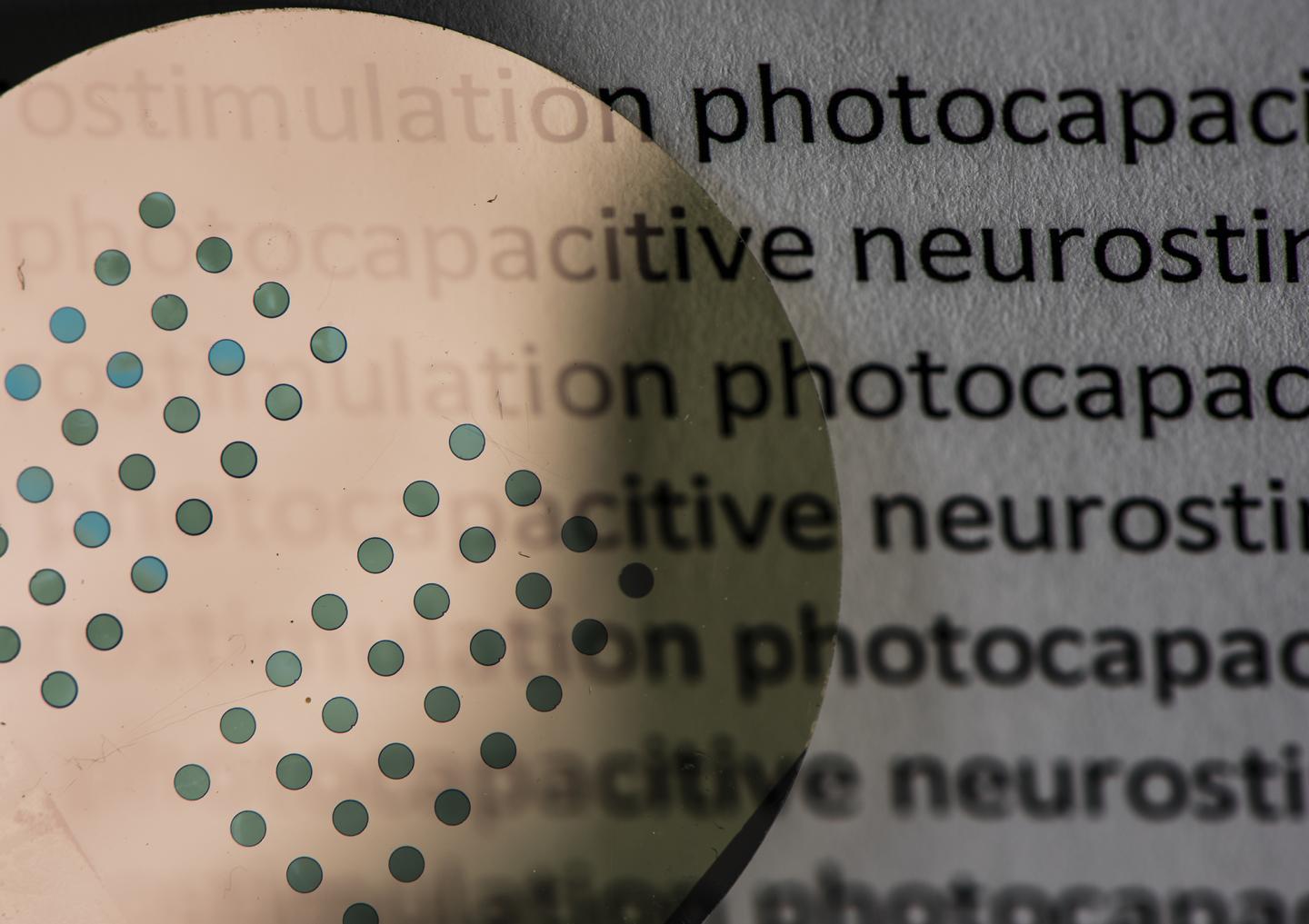 An array of semitransparent organic pixels on top of a ultrathin sheet of gold. The thickness of both the organic islands and the underlying gold is more than one-hundred times thinner than a single neuron. Credit: Thor Balkhed

A new prosthetic eye that uses organic pigments with direct electrical neurostimulation, could help restore sight in the blind.

Researchers from Tel Aviv University and Linköping University are developing the new prosthetic, which consists of microscopic pixels—about 100 times thinner than a single cell with a diameter smaller than the diameter of a human hair—with a pigment of semi-conducting nanocrystals on a thin circular film of photoactive material, which converts light impulses into electrical signals and stimulate neurons.

The pigments, which are commonly used in commercial cosmetics and tattooing ink, are cheap, non-toxic and abundant.

“We have optimized the photoactive film for near-infrared light, since biological tissues, such as bone, blood and skin, are most transparent at these wavelengths,” Eric Glowacki, principal investigator of the organic nanocrystals subgroup in the Laboratory of Organic Electronics, Linköping University, said in a statement. “This raises the possibility of other applications in humans in the future.”

According to the study, when illuminated in physiological solution, the metal–semiconductor devices charge up, transducing light pulses into localized displacement currents that are strong enough to electrically stimulate neurons with safe light intensities.

Glowacki described the artificial retina as a microscopic doughnut with the crystal-containing pigment in the middle and a small metal ring around it. It acts without any external connectors, and the nerve cells are activated without a delay.

“The response time must be short if we are to gain control of the stimulation of nerve cells,” David Rand, postdoctoral researcher at Tel Aviv University, said in a statement. “Here, the nerve cells are activated directly. We have shown that our device can be used to stimulate not only neurons in the brain but also neurons in non-functioning retinas.”

The human retina consists of several thin layers of cells, with light-sensitive neurons in the back of the eye that convert incident light to electric signals, while other cells process the nerve impulses and transmit them onwards along the optic nerve to an area of the brain called the visual cortex.

An artificial retina could be surgically implanted into the eye if a person’s sight has been lost as a consequence of the light-sensitive cells becoming degraded.

The new devices are freestanding, with no wiring or external bias. They are also stable in physiological conditions.