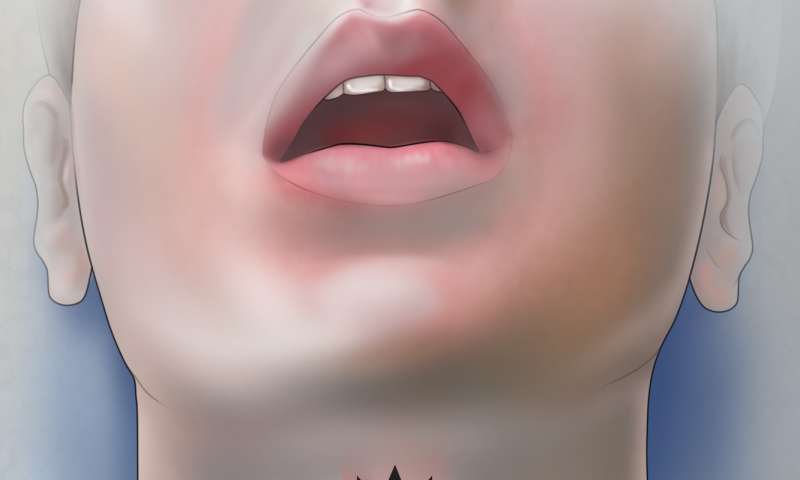 An illustration of the concept that a pair of human vocal cords can produce the same range of frequencies as a piano. Credit: Lisa A. Clark, MA, CMI, based on original art concept by Kanako Omichi and Tobias Riede. (Credit: Ingo R. Titze, Tobias Riede, and Ted Mau)

Picture a singer, accompanied by a grand piano. As the singer’s voice dances through multiple octaves of range, the pianist’s fingers trip from one end of the keyboard to the other. Both the singer’s voice and the piano are dynamic instruments. But while the piano creates its music using the vibration of 88 strings, the singer uses only two.

According to Ingo Titze, director of the National Center for Voice and Speech at the University of Utah, vocal cords are able to produce a wide range of sound frequencies because of the larynx’s ability to stretch vocal cords and the cords’ molecular composition. In a new paper published today in PLOS Computational Biology, Titze and his colleagues show how these two characteristics of various species’ larynxes can closely predict the range of frequencies each species can produce. The results, Titze said, reveal the evolutionary roots of how and why voice arose.

“It’s absolutely amazing how nature has created a compound, laminated string to cover a pitch range that is difficult, by any stretch of the imagination, to cover with one string,” Titze said.

While most people know the structures in our throats that produce speech as “vocal cords,” the term is not universally used among voice researchers. Some have preferred “vocal folds” since the mid-1970s, when studies of vocal anatomy showed a folding of the vocal ligament (the cord) during vibration. Titze said that, for the purposes of this discussion, “vocal cord” may be more apt, due to consideration of the cord’s string-like properties.

At birth, vocal cords are composed of a uniform, gel-like material. As the vocal cords mature, fibers develop within the gel, eventually forming a multilayered, laminated string. Imagine a set of guitar strings glued close together with gelatin.

Fibers throughout the vocal cord layers are linked together, however, so that while some layers may be under different amounts of tension than others, the layers do not vibrate independently of each other. Returning to our guitar-strings-in-gelatin analogy, when one string is plucked, the entire gel-fiber set shakes along with it. The muscles in the larynx further modulate the sound the cords produce, lengthening and shortening the cords to change the pitch.

Titze and his colleagues, Tobias Riede of Midwestern University in Glendale, Arizona and Ted Mau of the University of Texas Southwestern Medical Center, compiled measurements of larynx characteristics for 16 species, including humans and animals ranging from mice to elephants. As expected, larger animals had larger larynxes, and body size correlated well with the average frequency an animal could produce.

But body size could not predict an animal’s range of possible frequencies. “So, one asks, what’s going on inside the larynx that allows this quite different outcome for pitch range across species, where the mean pitch is so well-correlated with size?” Titze said.

Titze says that creating a manmade instrument with the same properties as a vocal cord might prove technically daunting. The first step, he says, would be to fashion a laminated string, with the layers cross-linked together and supported by fluid. “But then we’d have to figure out how to pull it, elongate it, and how to distribute the tension to one layer versus another layer versus another layer,” he said. “Nature has figured this out, how to literally play the dominant layer for a given pitch.”

The results may help surgeons repair damaged vocal cords. Because both cord stretchiness and stiffness factor into range, doctors may have more options to design treatments to restore much of a patient’s range. The findings also have implications for vocal training, and suggest that singers can increase their ranges by either stretching their vocal cords or by engaging in exercises that affect fiber spacing and cord stiffness – again, more options to achieve the same goal.

But Titze’s investigations into vocal cord structure also reveal something more primitive. Titze added that vocalization evolved to help primates communicate over long distances by using high and loud calls. Modern human speech communication, however, does not make much use of the wide pitch and loudness range of the mammalian larynx.

That capacity is still inherent in our vocal cords, he says, but so much of our communication is electronically modulated and amplified, with even professional singers aided by microphones, that our vocal cords are rarely put to their full use.

“If you never stretch your vocal cords and never do high pitches or loud voice, eventually the ligament will atrophy into a simpler structure and you won’t have that range available to you,” Titze said.

Despite the complexities of the vocal cord structure, Titze says he was surprised at how well the model of a simple vibrating string explained the cord’s range. “Most people would laugh at using a simple vibrating string model for something as complicated as a 3D, nonhomogeneous tissue structure,” he concluded. “But the string model does an incredibly good job of explaining this range of frequencies.”