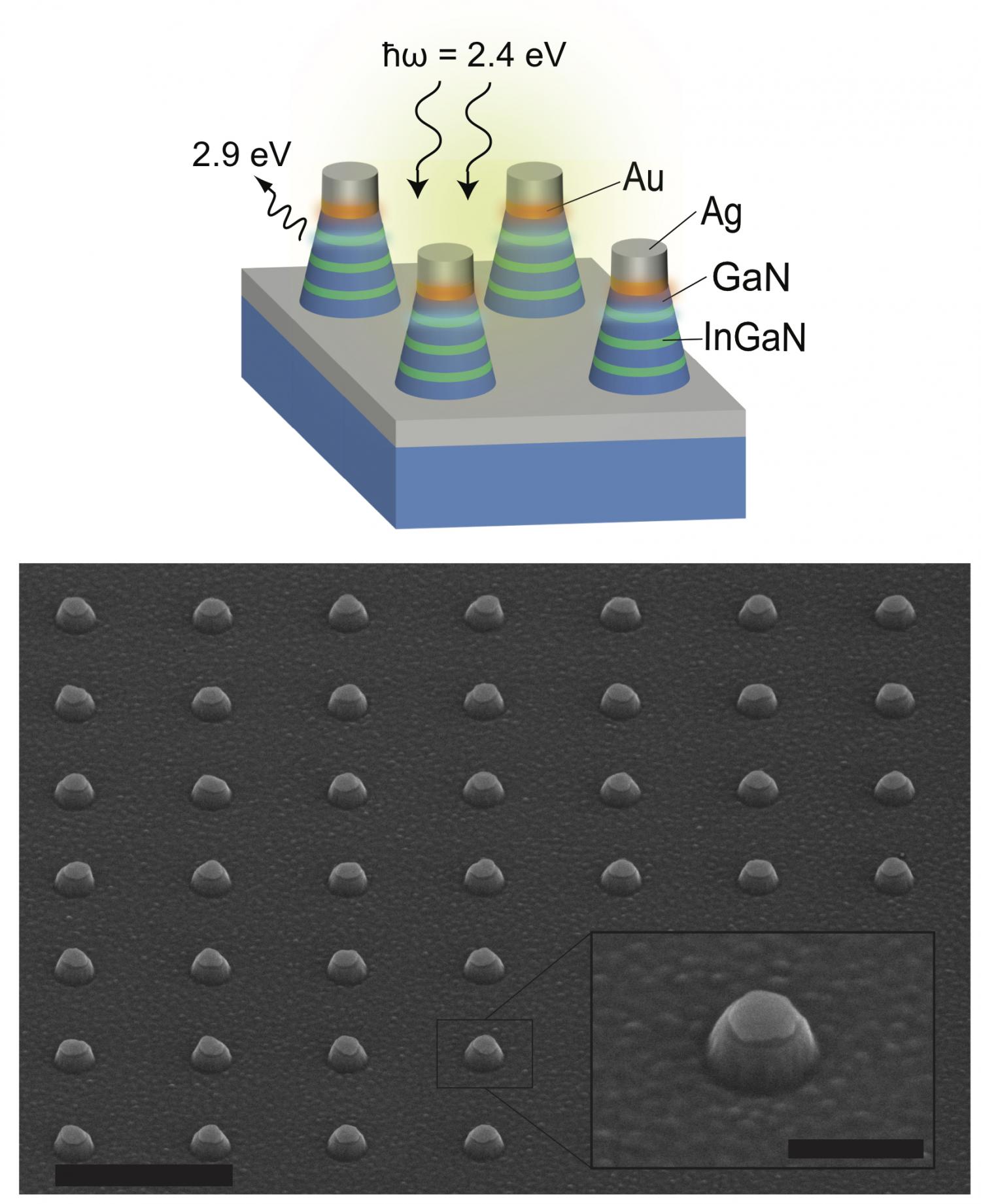 Experiments led by Gururaj Naik, an assistant professor of electrical and computer engineering, combined plasmonic metals and semiconducting quantum wells to boost the frequency of light, changing its color.

In a nanoscale prototype Naik developed as a postdoctoral researcher at Stanford University, custom-designed pylons that were struck by green light produced a higher-energy blue glow. “I’m taking low-energy photons and converting them to high-energy photons,” he said.

The work appears in the American Chemical Society’s Nano Letters.

The magic happens inside tiny pylons that measure about 100 nanometers across. When excited by a specific wavelength of light, specks of gold on the tips of the pylons convert the light energy into plasmons, waves of energy that slosh rhythmically across the gold surface like ripples on a pond. Plasmons are short-lived, and when they decay, they give up their energy in one of two ways; they either emit a photon of light or produce heat by transferring their energy to a single electron—a “hot” electron.

Naik’s work at Stanford was inspired by the groundbreaking work of professors Naomi Halas and Peter Nordlander at Rice’s Laboratory for Nanophotonics, who had shown that exciting plasmonic materials also excited “hot carriers” – electrons and holes – within. (Electron holes are the vacancies created when an electron is excited into a higher state, giving its atom a positive charge.) 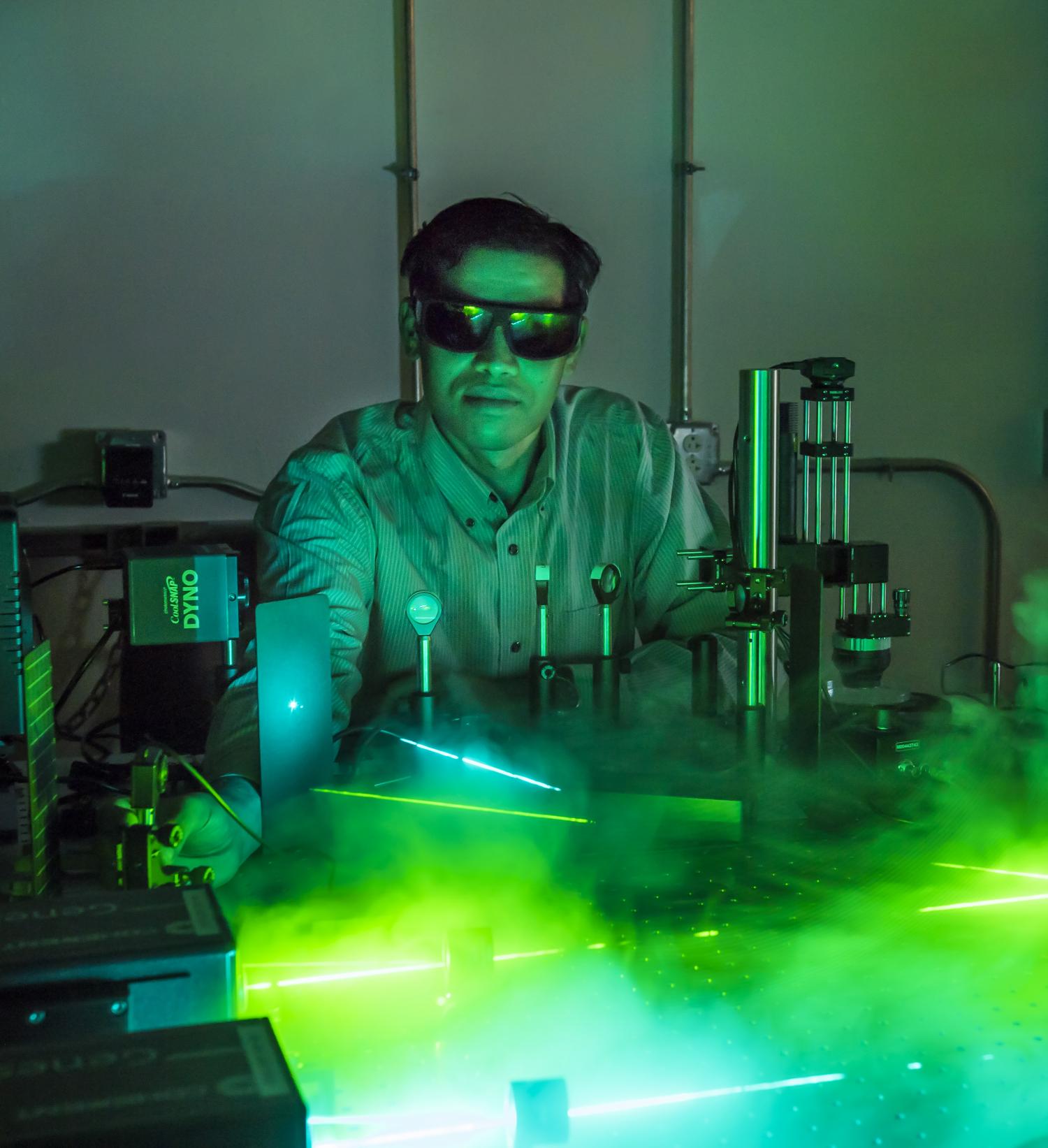 “Plasmonics is really great at squeezing light on the nanoscale,” said Naik, who joined Rice’s faculty a year ago. “But that always comes at the cost of something. Halas and Nordlander showed you can extract the optical losses in the form of electricity. My idea was to put them back to optical form.”

Present-day upconverters used in on-chip communications, photodynamic therapy, security and data storage have efficiencies in the range of 5 to 10 percent, Naik said. Quantum theory offers a maximum 50 percent efficiency (“because we’re absorbing two photons to emit one”) but, he said, 25 percent is a practical goal for his method.

Naik noted his devices can be tuned by changing the size and shape of the particles and thickness of the layers. “Upconverters based on lanthanides and organic molecules emit and absorb light at set frequencies because they’re fixed by atomic or molecular energy levels,” he said. “We can design quantum wells and tune their bandgaps to emit photons in the frequency range we want and similarly design metal nanostructures to absorb at different frequencies. That means we can design absorption and emission almost independently, which was not possible before.”

Naik built and tested a proof-of-concept prototype of the pylon array while working in the Stanford lab of Jennifer Dionne after co-authoring a theoretical paper with her that set the stage for the experiments.

“That’s a solid-state device,” Naik said of the prototype. “The next step is to make standalone particles by coating quantum dots with metal at just the right size and shape.”

These show promise as medical contrast agents or drug-delivery vehicles, he said. “Infrared light penetrates deeper into tissues, and blue light can cause the reactions necessary for the delivery of medicine,” Naik said. “People use upconverters with drugs, deliver them to the desired part of the body, and shine infrared light from the outside to deliver and activate the drug.”

The particles would also make a mean invisible ink, he said. “You can write with an upconverter and nobody would know until you shine high-intensity infrared on it and it upconverts to visible light.”