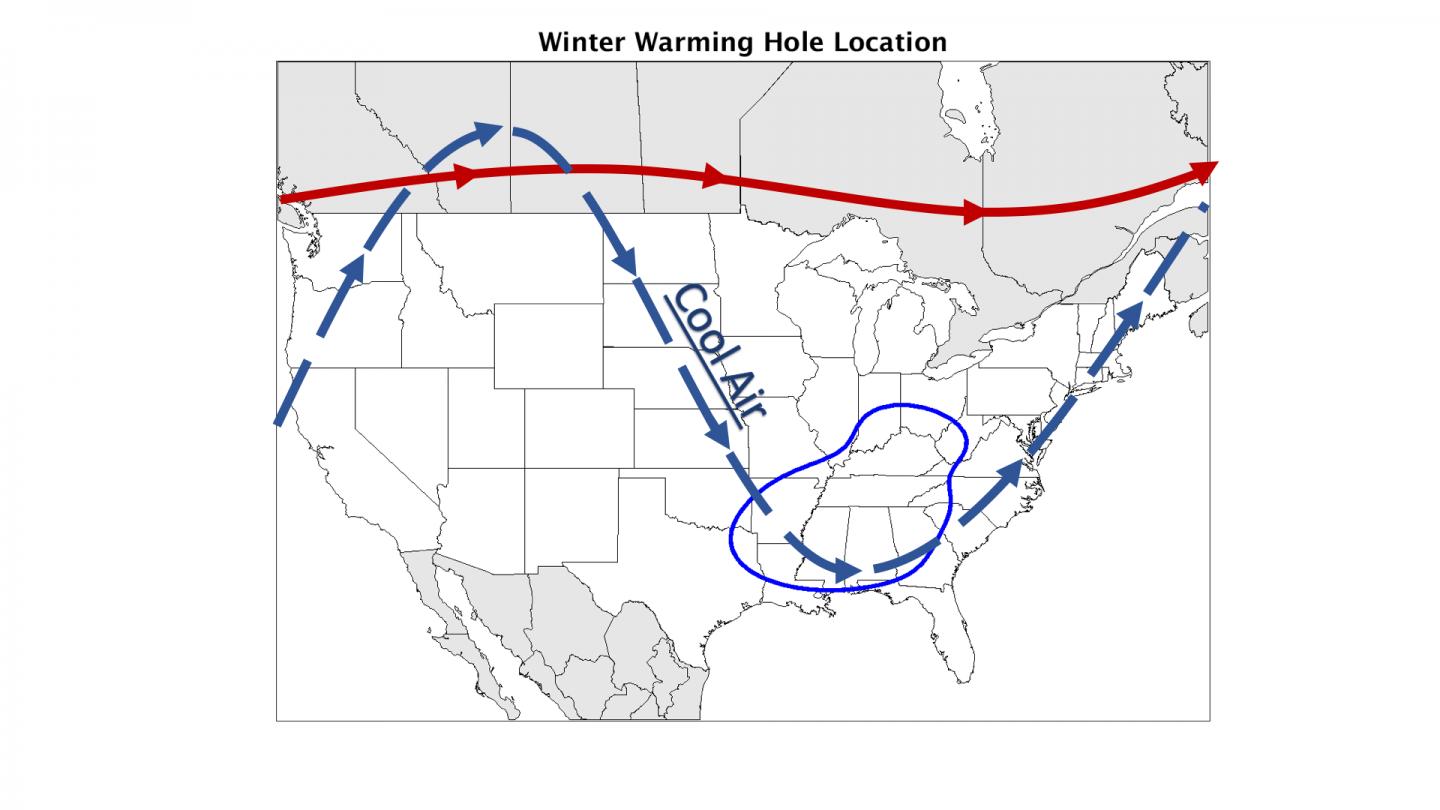 Winter warming hole location in the southeastern US.

Overwhelming scientific evidence has demonstrated that our planet is getting warmer due to climate change, yet parts of the eastern U.S. are actually getting cooler. According to a Dartmouth-led study in Geophysical Research Letters, the location of this anomaly, known as the “U.S. warming hole,” is a moving target.

The study found that winter temperatures in the U.S. warming hole are associated with a wavier jet stream, which is linked to natural climate cycles over the Atlantic and Pacific Oceans, and potentially to climate change. Previous research has illustrated that warming temperatures and melting Arctic sea ice set up conditions for a wavier jet stream. The study revealed that the jet stream over the U.S. became wavier in the late 1950’s, coincident with the start of the warming hole. As such, since the late 1950’s, the polar vortex has been cooling the southeastern U.S. during the winter.

“By discovering that the U.S. warming hole’s location depends on the season, we’ve found a new way to help understand this phenomenon,” says Jonathan M. Winter, an assistant professor of geography at Dartmouth and principle investigator for the research. “For example, the recent extreme cold snaps in the Southeast, which seem counterintuitive to global warming, may be related to the U.S. warming hole,” added Trevor F. Partridge, a graduate student in earth sciences at Dartmouth and the study’s lead author.

While the wintertime U.S. warming hole was found to be associated with the wavier jet stream, this was not the case for summertime temperatures. This conclusion supports previous studies that find connections between the summer warming hole in the Midwest and intensified farming, increased irrigation and air pollution, which primarily impact climate in summer and autumn.

The study provides new insight on when the U.S. warming hole occurred and where it is located spatially. Using National Oceanic and Atmospheric Administration data from 1,407 temperature stations and 1,722 precipitation stations from throughout the contiguous U.S. from 1901 to 2015, the researchers examined temperature and precipitation data over time for all stations, and identified stations that were persistently cooler than average from 1960 to 2015. Daily temperatures in the warming hole cooled by an average of 1.2 degrees Fahrenheit since 1958, compared to a global average warming of about 1 degree Fahrenheit over the same period. The findings provide greater context on the cause of the U.S. warming hole, a phenomenon that has large implications for both the U.S. agricultural sector, and Midwest and Southeast weather now and potentially into the future.