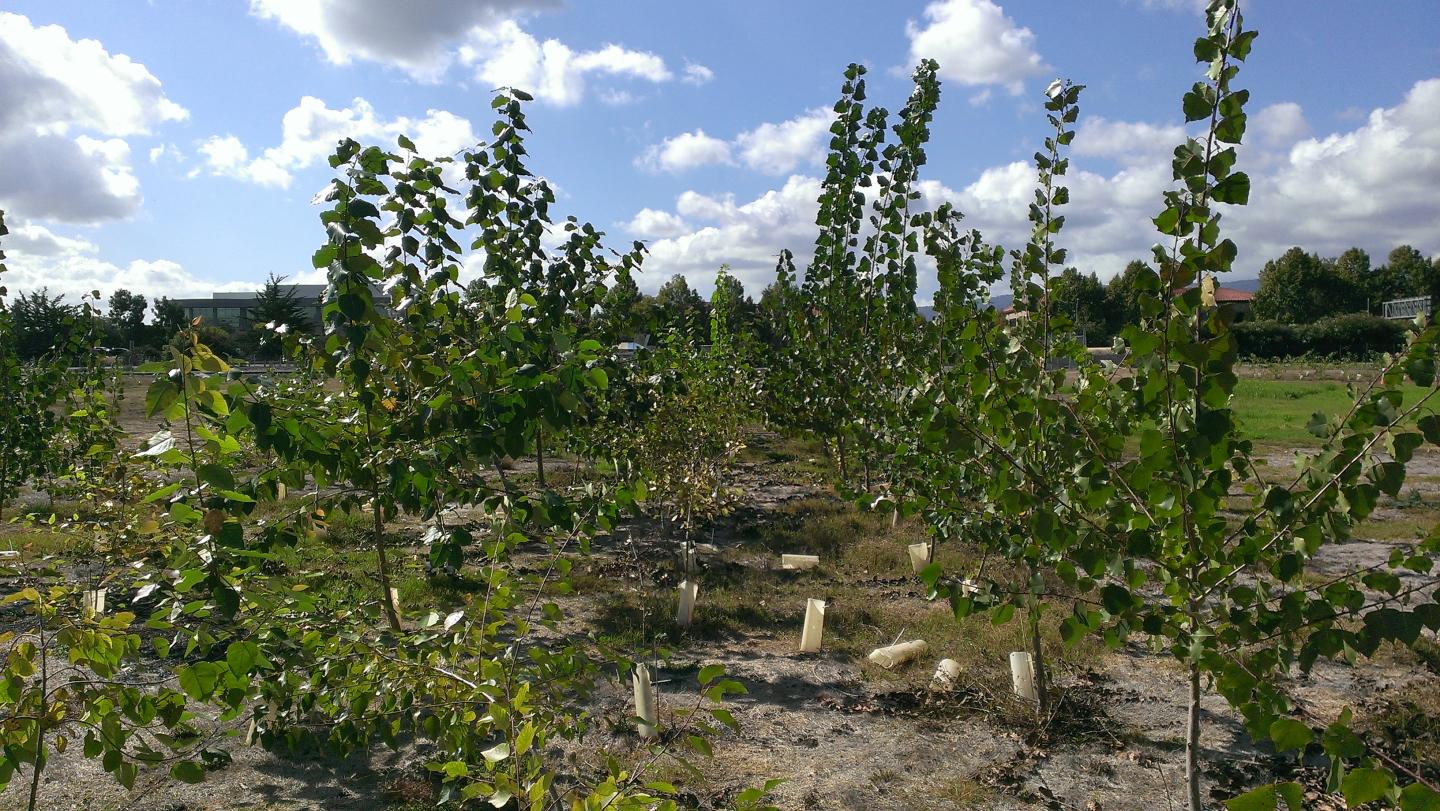 The darker, taller poplar trees shown at the test site at the end of their third season were inoculated with microbes, while the shorter, lighter-green trees (center row) were not given the bacteria. Source: John Freeman/Intrinsyx Technologies Corporation

Trees have the ability to capture and remove pollutants from the soil and degrade them through natural processes in the plant. It’s a feat of nature companies have used to help clean up polluted sites, though only in small-scale projects. Now, a probiotic bacteria for trees can boost the speed and effectiveness of this natural cycle, providing a microbial partner to help protect trees from the toxic effects of the pollutants and break down the toxins plants bring in from contaminated groundwater.

Researchers from the University of Washington and several small companies have conducted the first large-scale experiment on a Superfund site using poplar trees fortified with a probiotic — or natural microbe — to clean up groundwater contaminated with trichloroethylene (TCE), a common pollutant found in industrial areas that is harmful to humans when ingested through water or inhaled from the air. Their results were published in final version Aug. 11 in the journal Environmental Science & Technology.

The successful field trial could be a game changer to quickly and effectively clean up Superfund sites around the country and polluted sites abroad that have high levels of TCE, the authors say.

“These results open the door,” said corresponding author Sharon Doty, a UW professor in the School of Environmental and Forest Sciences. “We have known about this process for a long time from our laboratory research, but it hasn’t been used in practice because there were no field results. Now, engineering companies can start using this in real life.”

Contaminated sites containing TCE and other pollutants can be expensive to clean up when using engineering methods such as excavating or pumping toxins from underground. As a result, many sites sit untreated. This new method allows contaminated sites to be dealt with more effectively, often at lower costs, promoting human health.

Doty’s lab worked to find the best microbe strain that could effectively break down TCE and boost tree growth. Jun Won Kang, a former UW graduate student, had obtained poplar wood from a site in the Midwest where trees were already growing in TCE-contaminated soil. After grinding down small samples of the trees and isolating over a hundred different microbes, each strain was then placed in a flask containing high levels of TCE.

The microbe that ultimately was selected eliminated nearly all of the TCE in its flask. The researchers had a clear winner. “The poplar at the older site in the Midwest selected for the best microbes to help it do its job,” Doty explained. “We took advantage of that natural selection process. We just had to find the best ones that the plant already chose.”

The pollutant TCE has been used widely as a degreaser and a solvent in industrial manufacturing sites across the country. The U.S. Environmental Protection Agency cites TCE as one of the most common pollutants in soil or water, and it is present in more than 1,000 sites the agency lists as priorities for cleanup. TCE is a known carcinogen to humans, affecting the liver and even transferring the toxin to nursing babies through mothers’ breastmilk.

Given the prevalence and toxicity of TCE, the researchers used the chemical to test the ability of poplar trees infused with microbes to clean up groundwater in the Middlefield-Ellis-Whisman Superfund research area in California’s Silicon Valley after it had subsequently flowed into the NASA Research Park at NASA’s Ames Research Center. At NASA Ames, in coordination with NASA Ames’ Environmental Division, the researchers planted rows of young poplar trees — some inoculated with the specific microbe, and others without — on a field above a known groundwater plume contaminated with TCE.

After only a year, the trees given the microbe were bigger and healthier than the poplars with no special treatment. After three years, the inoculated trees were still more robust, and a sample of tree trunks revealed greatly reduced levels of TCE inside the trees.

When trees take up and degrade chemicals, called phytoremediation, it often comes at the expense of their own health. This manifests as stunted growth, yellow leaves, withering brown leaves and branches, and sometimes death as the pollutant hampers the tree’s ability to survive. But when the microbe selected specifically to deal with this toxin is introduced, the trees destroyed the TCE — and experienced more robust growth and increased survival rates, clear benefits of the probiotic.

“The real goal is to try to improve performance,” said co-author Michael Blaylock, president and CEO of Edenspace Systems Corporation in Virginia. “If we have something that speeds up and improves performance and makes it so the trees can grow better, that’s really what we were trying to accomplish with this project.”

Additionally, the researchers found that groundwater samples taken directly downstream from the test site showed much lower levels of the toxin, compared with higher levels up-gradient from the testing area. They also found evidence of increased chloride in the soil around the poplar roots, a harmless, naturally occurring element and byproduct of TCE as it is degraded by the bacteria inside trees.

A number of organizations have expressed interest in using this technology, said co-author John Freeman, chief science officer for Intrinsyx Technologies Corporation based at NASA’s Research Park. And landowners hampered by the high costs associated with traditional clean-up methods are starting to use the technology.

“This has the potential to make a huge impact on a lot of legacy sites where you have contaminated groundwater issues, including TCE, and where funding is currently less available,” Freeman said. “This is definitely a big cost savings to everyone involved. It’s a real win-win situation because it’s green, it’s long-term sustainable, publicly acceptable and it’s solar powered by the trees themselves.”