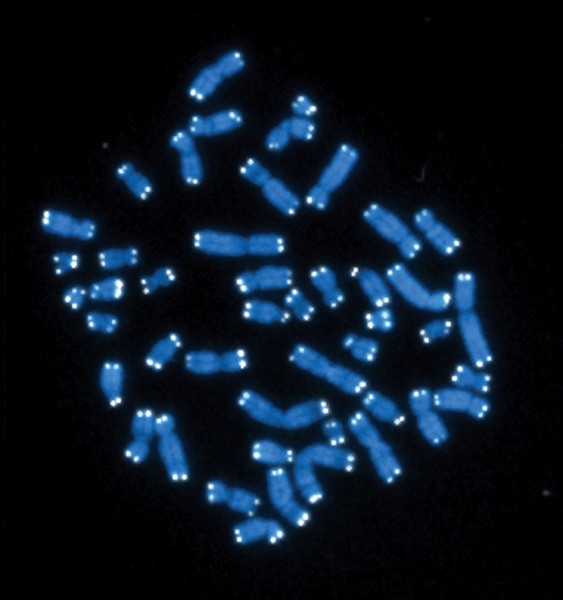 Colored in blue are the 46 chromosomes of the human genome. In white are the telomeres at the end of each chromosome.

New research indicates that people who had more infections as babies harbor a key marker of cellular aging as young adults: the protective stretches of DNA which “cap” the ends of their chromosomes are shorter than in adults who were healthier as infants.

The findings, published Jan. 25 in the American Journal of Human Biology, shed new light on how the intricate interplay between genetics and environment impacts human health.

“These are important and surprising findings because — generally speaking — shorter chromosome ‘caps’ are associated with a higher burden of disease later in life,” said lead author Dan Eisenberg, an assistant professor of anthropology at the University of Washington.

The ‘caps’ Eisenberg and his co-authors measured are called telomeres. These are long stretches of DNA at the ends of our chromosomes, which protect our genes from damage or improper regulation. One Nobel Prize-winning scientist who studies telomeres has compared them to aglets — the plastic or metal sheath covering ends of shoelaces. When aglets wear down, the shoelace is exposed to fraying and degradation from environmental forces.

Like aglets, telomeres don’t last forever. In most of our cells, telomeres get shorter each time that cell divides. And when they get too short, the cell either quits dividing or dies.

That makes telomere length particularly important for the cells of our immune system, especially the white blood cells circulating in our bloodstream. When activated against a pathogen, white blood cells undergo rapid rounds of cell division to raise a defensive force against the infectious invader. But if telomeres in white blood cells are already too short, the body may struggle to mount an effective immune response.

“Many studies — in laboratory animals and humans — have associated shorter telomeres with poor health outcomes, especially in adults,” said Eisenberg.

But few studies have addressed whether or not events early in a person’s life might affect telomere length.

To get at this question, Eisenberg turned to the Cebu Longitudinal Health and Nutrition Survey, which has tracked the health of over 3,000 infants born in 1983-1984 in Cebu City in the Philippines. Researchers collected detailed data every two months from mothers on the health and feeding habits of their babies up through age two. Mothers reported how often their babies had diarrhea — a sign of infection — as well as how often they breastfed their babies.

As these babies grew up, scientists collected additional health data during follow-up surveys over the next 20 years. In 2005, 1,776 of these offspring donated a blood sample. By then, they were 21- or 22-year-old young adults.
Eisenberg measured telomere length in cells from those blood samples. He then combined the data on adult telomere length with information about their health and feeding habits as babies.

He found that babies with higher reported cases of diarrhea at 6 to 12 months also had the shortest telomeres as adults. This six-month period is the typical age for weaning infants, as well as a time of increasing mobility and exploration. It is also a time when infectious diseases in infants reach their peak. Based on the environment and public health situation in Cebu City at the time, these cases of diarrhea were most likely brought about by infection, Eisenberg said.

Diarrheal infection is a very serious global health concern as it is the second leading cause of death in children under age five. The association Eisenberg found between this infection and telomeres is large enough that it might influence aging in important ways. For example, those with an average level of diarrheal infection as babies, compared to those who with no reported infections, showed the equivalent of three additional years of telomere “aging” — based on the rate of telomere shortening among middle-aged adults.

One explanation is that the adults have shorter telomeres because they had more infections as infants. Infections spur increased cell replications and inflammation, both of which can shorten telomeres. But, Eisenberg said, another explanation is also possible.

“It could also be that they had shorter telomeres at birth,” said Eisenberg. “And perhaps as a result, they were more susceptible to infections at 6 to 12 months and maintained these short telomeres into adulthood.” If this were the case, then telomeres may be an important determinant of whether or not children around the world succumb to diarrheal infections.

Surprisingly, he found no association between breastfeeding by mothers and telomere length in their offspring as adults.

“We were expecting to see a relationship between breastfeeding and telomere length because babies receive maternally-produced antibodies through breastmilk, which can help them fight off pathogens while their own immune systems are developing,” said Eisenberg. “In addition, breastfed babies are less likely to be exposed to infectious agents through contaminated food and water.”

In addition, one study from 2016 reported that, among 121 Latino children in California, exclusive breastfeeding in the first six weeks after birth was associated with longer telomeres at age 4 or 5. But there are many reasons that could explain the difference between the 2016 study in California and this new study from the Philippines, Eisenberg said.

“If breastfeeding does effect telomere length, it could be that the effect goes away by age 21,” said Eisenberg. “Also, infants in these studies were from vastly different parts of the world — which likely affects the pathogens they were exposed to and the other typical parenting habits of women who breastfeed.”

Only more data on health, telomere length and environment can resolve the debate, Eisenberg concluded.