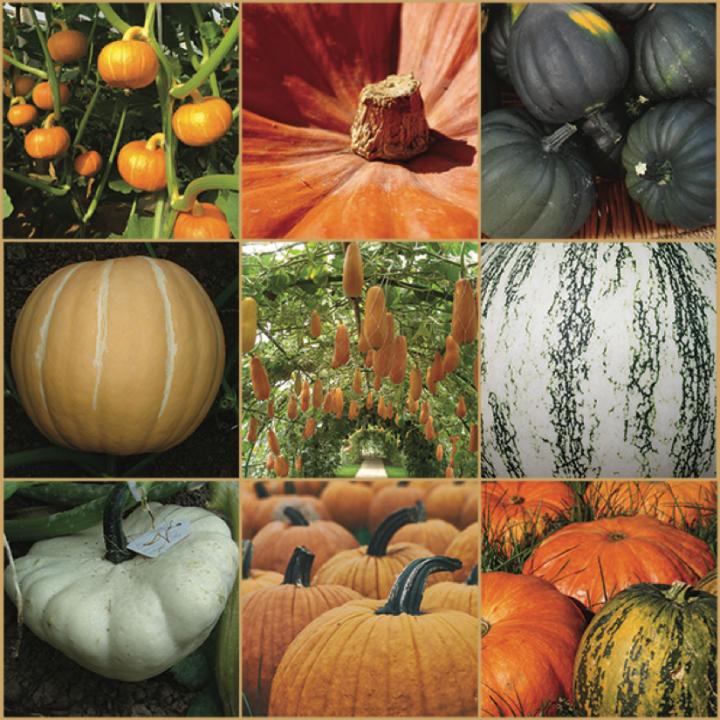 These are pumpkin species from around the world. Credit: Zhangjun Fei and Marissa Zuckerman

For some, pumpkins conjure carved Halloween decorations, but for many people around the world, these gourds provide nutrition. Scientists at Boyce Thompson Institute (BTI) and the National Engineering Research Center for Vegetables in Beijing have sequenced the genomes of two important pumpkin species, Cucurbita maxima and Cucurbita moschata.

The finished genomes appear in the October issue of Molecular Plant, which highlights the work on its cover.

“Pumpkins are used as a staple food in many developing countries and are cultivated all over the world for their culinary and ornamental uses,” said Zhangjun Fei, associate professor at BTI, Cornell adjunct associate professor of plant pathology and a senior author of the paper. Over two-thirds of the world’s pumpkins, squash and gourds are produced in Asia alone.

The researchers sequenced the two different pumpkin species to better understand their contrasting desirable traits: Cucurbita moschata is known for its resistance to disease and other stresses, such as extreme temperatures, while C. maxima is better known for its fruit quality and nutrition.

Additionally, the hybrid of these two species, called ‘Shintosa’ has even greater stress tolerance than C. moschata, and is often used as a rootstock for other cucurbit crops, such as watermelon, cucumber, and melon. Growers will cut the pumpkin seedling from its roots, and fuse the stems of other cucurbits onto it, giving them strong, resistant roots to grow from.

Once deciphered, the genome sequences are an important resource for further scientific research and breeding of Cucurbita crops. By analyzing the genomes, researchers will be able to identify many genes associated with the pumpkin’s desirable traits, and better understand the genetics behind the extreme phenotypes of the ‘Shintosa’ hybrid.

In the cucurbit world, this means faster breeding for resistance to diseases such as fusarium wilt or powdery mildew – that white film many gardeners might find killing their squash leaves, or enhancing production of carotenoids – the orange pigments associated with eye health, among other benefits.

While the ultimate goal for genome sequencing is to be able to link specific genes to the traits they control, the pumpkin sequencing results also revealed an interesting evolutionary history for Cucurbita species.

Cucurbitas have large genomes with 20 pairs of chromosomes, compared to watermelon’s 11 or cucumber’s 7. This was the first clue that the pumpkin’s genome had expanded a long time ago. By comparing the Curcurbita genome sequences to those of other cucurbits, the researchers discovered that the pumpkin genome is actually a combination of two ancient genomes, making it a paleotetraploid.

Typically after an allotetraploid is formed, the genome will experience downsizing and gene loss, eventually transforming the new species back into a diploid. Sometimes, one of the contributing genomes will dominate over the others to retain more genes, a phenomenon observed in maize and cotton.

Interestingly, for pumpkins this was not the case. The ancient Cucurbita allotetraploid lost its duplicated genes randomly from both of the contributing diploids. Furthermore, the ancestral chromosome remained largely intact, leaving the modern pumpkin with two subgenomes representing the ancient species that contributed to the paleotetraploid.

“We were excited to find out that the current two subgenomes in pumpkin largely maintain the chromosome structures of the two progenitors despite sharing the same nucleus for at least three million years,” said Shan Wu, first author of the paper and BTI postdoc.

The next time you carve a pumpkin, take a moment to think about the curious evolutionary path it took to get here, and how breeders, now armed with the genome sequence, will be better able to improve the pumpkin to help feed millions around the world.