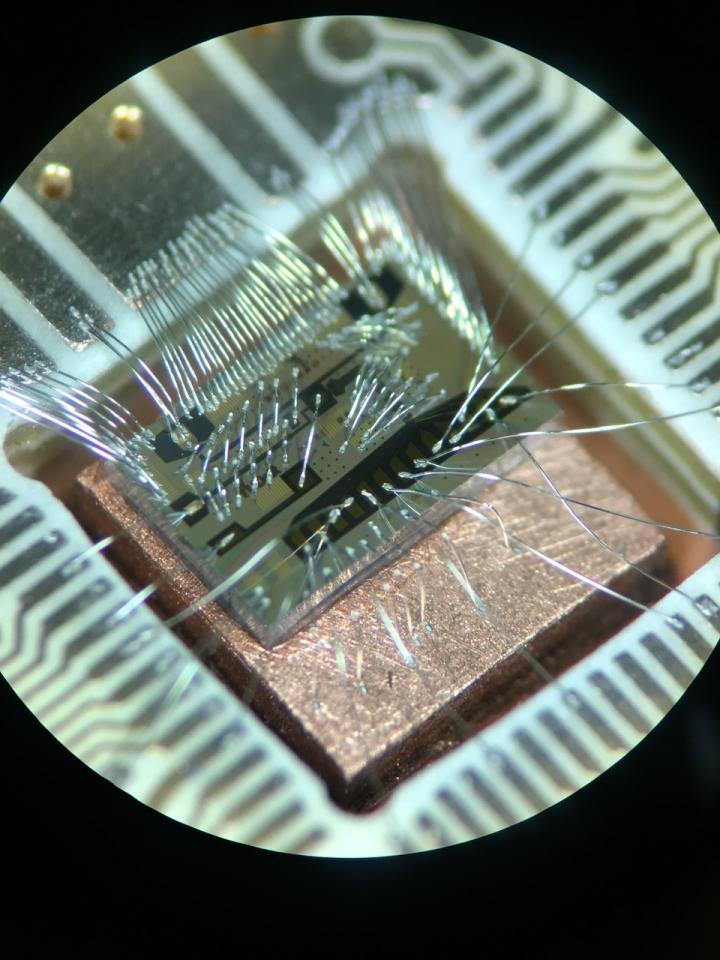 The quantum computer of the future will be able to carry out computations far beyond the capacity of today’s computers.

The worldwide race to create more, better and reliable quantum processors is progressing fast, as a team of TU Delft scientists led by Professor Vandersypen has realised yet again. In a neck-and-neck race with their competitors, they showed that quantum information of an electron spin can be transported to a photon, in a silicon quantum chip. This is important in order to connect quantum bits across the chip and allowing to scale up to large numbers of qubits. Their work was published today in the journal Science.

The quantum computer of the future will be able to carry out computations far beyond the capacity of today’s computers. Quantum superpositions and entanglement of quantum bits (qubits) make it possible to perform parallel computations. Scientists and companies worldwide are engaged in creating increasingly better quantum chips with more and more quantum bits. QuTech in Delft is working hard on several types of quantum chips.

The core of the quantum chips is made of silicon. “This is a material that we are very familiar with,” explains Professor Lieven Vandersypen of QuTech and the Kavli Institute of Nanoscience Delft, “Silicon is widely used in transistors and so can be found in all electronic devices.” But silicon is also a very promising material for quantum technology. PhD candidate Guoji Zheng: “We can use electrical fields to capture single electrons in silicon for use as quantum bits (qubits). This is an attractive material as it ensures the information in the qubit can be stored for a long time.”

Making useful computations requires large numbers of qubits and it is this upscaling to large numbers that is providing a challenge worldwide. “To use a lot of qubits at the same time, they need to be connected to each other; there needs to be good communication”, explains researcher Nodar Samkharadze. At present the electrons that are captured as qubits in silicon can only make direct contact with their immediate neighbours. Nodar: “That makes it tricky to scale up to large numbers of qubits.”

Other quantum systems use photons for long-distance interactions. For years, this was also a major goal for silicon. Only in recent years have various scientists made progress on this. The Delft scientists have now shown that a single electron spin and a single photon can be coupled on a silicon chip. This coupling makes it possible in principle to transfer quantum information between a spin and a photon. Guoji Zheng: “This is important to connect distant quantum bits on a silicon chip, thereby paving the way to upscaling quantum bits on silicon chips.”

On to the next step

Vandersypen is proud of his team: “My team achieved this result in a relatively short time and under great pressure from worldwide competition.” It is a true Delft breakthrough: “The substrate is made in Delft, the chip created in the Delft cleanrooms, and all measurements carried out at QuTech,” adds Nodar Samkharadze. The scientists are now working hard on the next steps. Vandersypen: “The goal now is to transfer the information via a photon from on electron spin to another.”