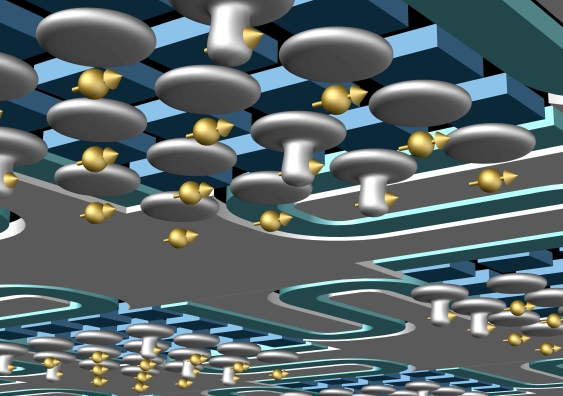 Engineers at Australia’s University of New South Wales have invented a radical new architecture for quantum computing, based on novel ‘flip-flop qubits’, that promises to make the large-scale manufacture of quantum chips dramatically cheaper – and easier – than thought possible.

The new chip design, detailed in the journal Nature Communications, allows for a silicon quantum processor that can be scaled up without the precise placement of atoms required in other approaches. Importantly, it allows quantum bits (or ‘qubits’) – the basic unit of information in a quantum computer – to be placed hundreds of nanometres apart and still remain coupled.

The design was conceived by a team led by Andrea Morello, Program Manager in UNSW-based ARC Centre of Excellence for Quantum Computation and Communication Technology (CQC2T), who said fabrication of the new design should be easily within reach of today’s technology.

Lead author Guilherme Tosi, a Research Fellow at CQC2T, developed the pioneering concept along with Morello and co-authors Fahd Mohiyaddin, Vivien Schmitt and Stefanie Tenberg of CQC2T, with collaborators Rajib Rahman and Gerhard Klimeck of Purdue University in the USA.

“It’s a brilliant design, and like many such conceptual leaps, it’s amazing no-one had thought of it before,” said Morello.

“What Guilherme and the team have invented is a new way to define a ‘spin qubit’ that uses both the electron and the nucleus of the atom. Crucially, this new qubit can be controlled using electric signals, instead of magnetic ones. Electric signals are significantly easier to distribute and localise within an electronic chip.”

Tosi said the design sidesteps a challenge that all spin-based silicon qubits were expected to face as teams begin building larger and larger arrays of qubits: the need to space them at a distance of only 10-20 nanometres, or just 50 atoms apart.

“If they’re too close, or too far apart, the ‘entanglement’ between quantum bits – which is what makes quantum computers so special – doesn’t occur,” Tosi said.

Morello said researchers at UNSW already lead the world in making spin qubits at this scale. “But if we want to make an array of thousands or millions of qubits so close together, it means that all the control lines, the control electronics and the readout devices must also be fabricated at that nanometric scale, and with that pitch and that density of electrodes. This new concept suggests another pathway.”

At the other end of the spectrum are superconducting circuits – pursued, for instance, by IBM and Google – and ion traps. These systems are large and easier to fabricate, and are currently leading the way in the number of qubits that can be operated. However, due to their larger dimensions, in the long run they may face challenges when trying to assemble and operate millions of qubits, as required by the most useful quantum algorithms.

“Our new silicon-based approach sits right at the sweet spot,” said Morello, a professor of quantum engineering at UNSW. “It’s easier to fabricate than atomic-scale devices, but still allows us to place a million qubits on a square millimetre.”

In the single-atom qubit used by Morello’s team, and which Tosi’s new design applies, a silicon chip is covered with a layer of insulating silicon oxide, on top of which rests a pattern of metallic electrodes that operate at temperatures near absolute zero and in the presence of a very strong magnetic field.

At the core is a phosphorus atom, from which Morello’s team has previously built two functional qubits using an electron and the nucleus of the atom. These qubits, taken individually, have demonstrated world-record coherence times.

“We call it the ‘flip-flop’ qubit,” said Tosi. “To operate this qubit, you need to pull the electron a little bit away from the nucleus, using the electrodes at the top. By doing so, you also create an electric dipole.”

“This is the crucial point,” adds Morello. “These electric dipoles interact with each other over fairly large distances, a good fraction of a micron, or 1,000 nanometres.

“This means we can now place the single-atom qubits much further apart than previously thought possible,” he continued. “So there is plenty of space to intersperse the key classical components such as interconnects, control electrodes and readout devices, while retaining the precise atom-like nature of the quantum bit.”

Morello called Tosi’s concept as significant as Bruce Kane seminal 1998 paper in Nature. Kane, then a senior research associate at UNSW, hit upon a new architecture that could make a silicon-based quantum computer a reality – triggering Australia’s race to build a quantum computer.

“Like Kane’s paper, this is a theory, a proposal – the qubit has yet to be built,” said Morello. “We have some preliminary experimental data that suggests it’s entirely feasible, so we’re working to fully demonstrate this. But I think this is as visionary as Kane’s original paper.”

Building a quantum computer has been called the ‘space race of the 21st century’ – a difficult and ambitious challenge with the potential to deliver revolutionary tools for tackling otherwise impossible calculations, with a plethora of useful applications in healthcare, defence, finance, chemistry and materials development, software debugging, aerospace and transport. Its speed and power lie in the fact that quantum systems can host multiple ‘superpositions’ of different initial states, and in the spooky ‘entanglement’ that only occurs at the quantum level the fundamental particles.

“It will take great engineering to bring quantum computing to commercial reality, and the work we see from this extraordinary team puts Australia in the driver’s seat,” said Mark Hoffman, UNSW’s Dean of Engineering. “It’s a great example of how UNSW, like many of the world’s leading research universities, is today at the heart of a sophisticated global knowledge system that is shaping our future.”

The UNSW team has struck a A$83 million deal between UNSW, telco giant Telstra, Australia’s Commonwealth Bank and the Australian and New South Wales governments to develop, by 2022, a 10-qubit prototype silicon quantum integrated circuit – the first step in building the world’s first quantum computer in silicon.