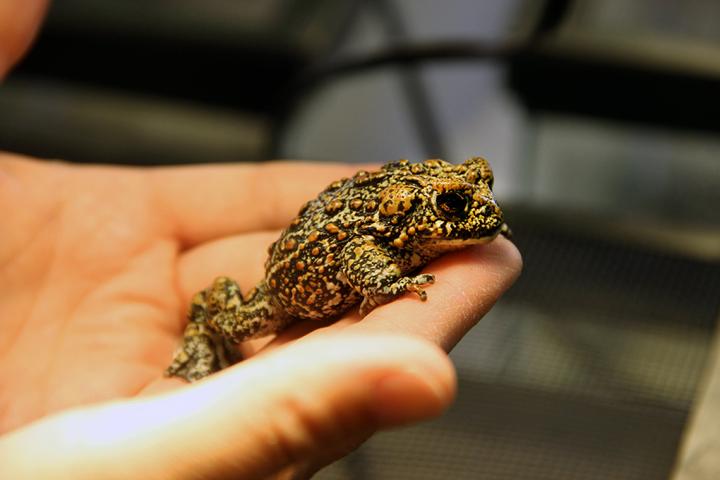 A recently discovered new species of toad, the Dixie Valley toad, was found by a team from the University of Nevada, Reno in a spring-fed marsh in the Great Basin of Nevada, which was once covered by large marshes and giant inland lakes during the Pleistocene Epoch and is now among the most arid regions in the United States with only one percent of the landscape containing water. Source: Photo by Mike Wolterbeek, University of Nevada, Reno.

Three new species of toads have been discovered living in Nevada’s Great Basin in an expansive survey of the 190,000 square mile ancient lake bottom. Discoveries of new amphibians are extremely rare in the United States with only three new frog species discovered since 1985 – and toad species are even more rare, with the last species discovered north of Mexico, the now extinct Wyoming toad, in 1968.

“We’ve found the toads in small, wet habitats surrounded by high-desert completely cut off from other populations,” Dick Tracy, a renowned biology professor at the University of Nevada, Reno, and lead scientist on the project, said. “These are absolutely new, true species that have been separated from other populations for 650,000 years.”

The three new species, the Dixie Valley toad, Railroad Valley toad and Hot Creek toad are not connected geographically. They were found in Tracy’s 10-year long survey of the desert-dominated Great Basin. His team used 30 “shape” metrics and DNA studies to analyze these toads’ characteristics to determine if each were distinguishable from the closely related Western toad, found throughout the Western United States.

The evidence supports the recognition of three distinct new species. The toads are small in size, yet each have a suite of unique physical features that differ from each other, as well as other toads in the region. Each of the species have slightly different colors, and they are about two inches long when full grown.

“The Dixie Valley toad is a pretty toad, with flecks of gold on an olive background,” Tracy, a long-time professor in the biology department of the College of Science, said. “It’s not like the big, common green toads you might find in other marshes around the west or even in Rancho San Rafael Park in Reno.”

The Dixie Valley toad is in Churchill County about 100 miles east of Reno. The toad is only found in this isolated spring-fed marsh which make up less than four square miles, surrounded by an arid region where aquatic resources are both rare and widely scattered. Dixie Valley is the hottest and most geothermally active system in the Basin and Range Province. The habitat occupied by this newly described species is also adjacent to a proposed site for a geothermal power plant that could dry up the marsh and threaten the toad’s survival.

The power plant development is on hold while the Bureau of Land Management reviews the geothermal project and the possible impacts on the toad species. The Center for Biological Diversity, a national environmental group based in Tucson, Arizona, marshaled more than 1000 letters to the BLM asking them to reconsider permitting the power plant being built at the site of the newly discovered species.

“If this power plant goes in and the habitat is dried up, this recently discovered species could go extinct,” Tracy said. “It’s a good candidate for an Endangered Species Act listing. The ESA was passed under Richard Nixon in 1973, and the second species listed under the new Act was the Houston Toad. This is a tough conflict between commerce and biological resources, and we need to seek compromises so if the project proceeds, it won’t hurt the toads.”

Tracy’s team includes his master’s student Michelle Gordon from the University’s Biology Graduate Program, who is the lead author of the scientific paper describing the new species, and his former doctoral student Eric Simandle from the University’s Ecology and Evolution and Conservation Biology Graduate Program. Simandle is now an associate professor at Paul Smiths College in New York and is a co-author on the study that discovered the toad in the thick underbrush of the spring-fed marsh.

The small isolated toad populations also have the smallest individuals compared to other western toads.

The Dixie Valley species has the smallest body size among the region’s complex of related species in the western United States, and can be further diagnosed from other toads in the complex by the large glands on its hind legs in addition to its distinctive coloration.

The overall population numbers of the Dixie Valley toad are unknown, and the current range is severely restricted, suggesting that this species’ population is likely very small and especially vulnerable to changes in environment.

“The toads are perfectly concealed in the dense vegetation of their habitat,” Gordon said. “You could easily miss seeing them during the day, making accurate counts difficult. But, during one trip at dusk, toads were everywhere, giving the impression that toads were locally abundant. And, without the water in this habitat, this toad species would completely disappear.”

The Railroad Valley toad is in the Tonopah Basin in the central Nevada desert and the Hot Creek Toad is about 35 miles away but in Hot Creek Mountain Range, in a drainage isolated from the Railroad Valley toad. All three new species are natives of the Great Basin in Nevada, which was once covered by large marshes and giant inland lakes during the Pleistocene Epoch and is now among the most arid regions in the United States with only one percent of the landscape containing water.

“Our goal has been to understand the relationships among toad populations in the Great Basin,” Tracy said. “We’ve found that our knowledge of amphibian diversity in the western United States remains incomplete and that novel discoveries continue to occur, even in unlikely settings. This is really, really neat; an exciting thing, to find something not known to exist before.”

Tracy has been honored as a Guggenheim Fellow, as a Fellow in the American Association for the Advancement of Science, as a Distinguished Scholar at Pepperdine University, and as a Fellow of the Association of Western Universities. He is the recipient of an American Society of Zoologists’ Service Award, a Desert Tortoise Council Conservation Award and a Service Award from the U.S. Fish and Wildlife Service. Tracy has authored more than 200 scientific papers, and his work is known internationally.

“Dr. Tracy has long been recognized as one of the world’s leading ecologists,” Jack Hayes, chair of the Department of Biology said. “In recent years as he has turned his attention to conservation issues, he has been translating his basic knowledge into studies that make a difference for Nevada, the U.S., and the biodiversity of the world. The discovery of a new species of vertebrate in North America at this point in time is extremely rare, so the research by Dr. Tracy and his graduate students is a remarkable and exciting accomplishment.”

The discovery of the Dixie Valley toad was announced in the peer-reviewed science journal Zootaxa on July 6.