Imagine being able to squeeze a line of ketchup on a hot dog without spilling, pick up eggs off the counter without breaking them, hold a heavy frying pan or dog on a leash—now imagine doing all of that with a prosthetic hand and feeling the vibrations that tell you how hard to squeeze them?

Two first amputees have been doing just that while testing a prosthetic system that allows them to feel the same intensity of pressure on their prosthetic hands as they feel with their intact hands, thanks to a new study.

Scientists and engineers from Case Western Reserve University have found how the nervous system encodes the intensity of tactile perception—something that was impossible to reveal studying intact hands alone, but crucial to restoring the sense of touch and dexterity.

“Touch is a critically important function of our hand. Without it any prosthesis would be a foreign object or tool to the user. This was an unsolved problem and I was motivated by conversations with amputees who just wanted to ‘feel’ the objects that they were touching. It also struck me just how clumsy and ‘wooden’ the use of prosthesis was,” Dustin Tyler, biomedical engineering professor at Case Western Reserve and the primary investigator of the research told R&D Magazine in an exclusive interview. “Since we already knew that nerve cuff electrodes could be placed in the body and survive for at least a decade, it seemed like the obvious choice to apply it to sensory restoration. I was inspired by the possibility of talking directly to the brain and communicating a perception of the world to the user.”

Tyler and his team wanted to know what it would feel like for the amputee and if the prosthesis could be made focused on the sensation and made feel natural. It was also helpful that the researchers could ask the subjects directly what they felt, which would allow them to study this phenomenon in a way “not at all possible in non-human experiments.”

The researchers’ work, published in the journal Science Translational Medicine, builds on previous research that showed varying patterns of electrical signals provide the amputees with familiar sensations, such as the touch of a cotton ball or the press of the tip of a ball-point pen.

How does it work?

According to Emily Graczyk, a Ph.D. student in Tyler’s lab who led the study—small electrodes were surgically placed around the subjects’ nerves in May of 2012 for one subject and in January of 2013 for the other. These electrodes are connected to hair-like wires that cross their skin in the upper arm, and these wires are connected to a stimulation device. The stimulation device generates small pulses of electricity that are sent to tiny contacts around the nerve. These pulses directly activate the residual nerves in the arm. When the prosthetic user grasps an object, touch sensors in the tips of the prosthetic fingers pick up the amount of pressure exerted on the object. This information is translated into the neural code or language that conveys the amount of pressure. The work supported by the DARPA-HAPTIX program and the Department Veteran Affairs Rehabilitation Research and Development office is the subject of the recent Science Translational Medicine paper, which describes the team’s continued refinement and understanding of this neural code. Once the information is transferred to the nerve, it is faithfully carried up to the brain through the normal pathways that process sensory information from the hand.

Through this study, the researchers found that the two male volunteers could discern 20 distinct levels of intensity that they interpreted as pressure. 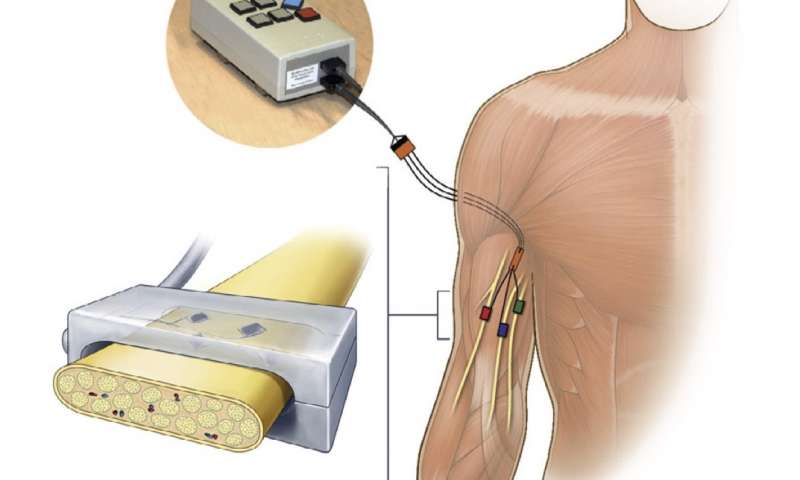 Electrical stimulation was delivered by an external stimulator (top left) through percutaneous leads to FINEs implanted on the median, ulnar, and radial nerves of an upper-limb amputee (bottom left). Each electrode contact evokes sensory percepts on small regions of the missing hand of the subject. (Credit: Graczyk et al, Sci. Transl. Med.)

They tested the volunteer’s ability to discern intensity in three ways:

During the last test, the team found that both volunteers could reliably correlate the two.

On an intact hand, increasing pressure on the skin increases the firing rate of nerve fibers at that location and nearby fibers are also recruited, or activated. But until now, no one knew for certain how each of these neural responses influences sensory magnitude.

The researchers realized that the electrical pulse frequency affects the firing rate of the nerve fibers and the charge per pulse affects the neural recruitment. By decoupling the intensity and frequency of electrical signal one at a time, the researchers found that perceived intensity is predicted by the combination of pulse frequency and charge per pulse—which they called the activation charge.

The study showed the activation charge rate approximates the total spike rate evoked in the activated nerve bundle. This discovery helps researchers understand how people perceive what’s in their hands, which would lead to better prosthetics, according to Tyler.

To learn more, the researchers are exploring what sensations are produced by the electrical signals and how the sensations improve functional capabilities. The participants will continue to test take-home versions of the prosthetic system.

“We believe that restoring sensation is the critical next step for upper-limb prosthetics,” Tyler told R&D. “One subject reported that he chose to pick up cups and various household objects ‘just to feel the sensation.’ This means that the restored sensation was such a positive experience that he sought it out even when not necessary to accomplish a task. Our subjects have also described the experience of using the prosthesis without sensation as just ‘using a tool,’ but using the prosthesis with sensation as ‘having a hand again’ or ‘being two-handed again.’ We believe that sensory restoration will provide benefits for amputees, both in functional abilities and in quality of life.”