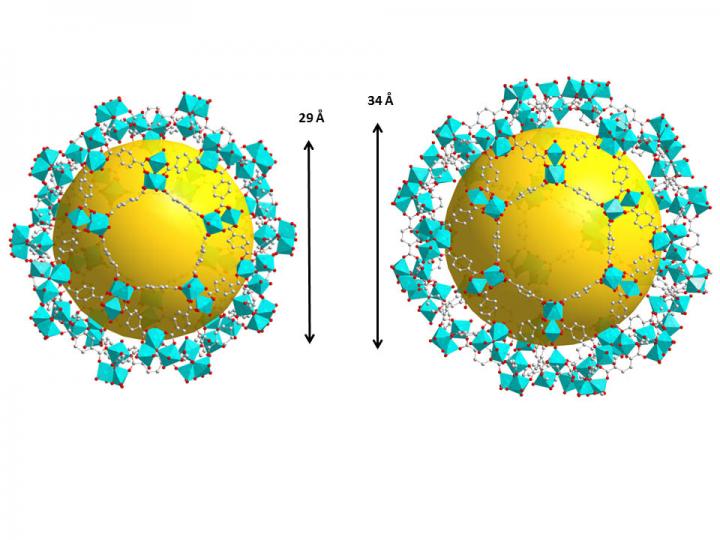 These are two types of cages in the crystal structure of the metal-organic framework, MIL-101-Cr. The yellow spheres represent the pore space for capturing radioactive iodides and have diameters of 29 and 34 angstroms, respectively. An angstrom is one 10 millionth of a millimeter. Source: Hao Wang/Rutgers University-New Brunswick

Seeking a better way to capture radioactive iodides in spent nuclear reactor fuel, Rutgers-New Brunswick scientists have developed an extremely efficient “molecular trap” that can be recycled and reused.

The trap is like a tiny, porous super-sponge. The internal surface area of just one gram of this material could stretch out to cover five 94-by-50-foot basketball courts, or 23,500 square feet. And, once caught inside, radioactive iodides will remain trapped for eons.

“This type of material has tremendous potential because of its high porosity,” said Jing Li, distinguished professor in the Department of Chemistry and Chemical Biology at Rutgers University-New Brunswick. “It has far more space than a sponge and it can trap lots of stuff.”

Li is corresponding author of a study on molecular traps for nuclear fuel reprocessing that was published in Nature Communications. The first author is Baiyan Li, a former postdoctoral associate in Li’s group, and other Rutgers co-authors include doctoral students Hao Wang and Benjamin J. Deibert.

Reprocessing means separating spent nuclear reactor fuel into materials that may be recycled for use in new nuclear fuel or discarded as waste, according to the U.S. Nuclear Regulatory Commission. The U.S. has no commercial reprocessing facilities at the moment, but commercial facilities are operating in other countries.

When spent fuel is reprocessed, radioactive molecular iodine and organic iodide gases that pose cancer and environmental risks must be captured and sequestered. The long-lived gases are hard to capture and can leak into the environment, the Rutgers study says.

Solid adsorbents like silver-infused silica, alumina and zeolites can capture iodides, but their low uptake capacity and poor recyclability make them inefficient and costly, according to Li, who works in the School of Arts and Sciences.

So Rutgers and other researchers developed a “molecular trap” that is made of a highly porous metal-organic framework. Its performance exceeds the standard set by nuclear industry rules, which require waste reprocessing plants to remove more than 99.9 percent of radioactive iodides from spent nuclear fuel rods.

It also far outperforms all current industrial materials in adsorbing, or binding to, radioactive organic iodides. For example, its ability to adsorb methyl iodide at 302 degrees Fahrenheit exceeds that of a benchmark industrial product by more than 340 percent.

Another benefit of the Rutgers molecular trap is that captured methyl iodide can be removed from metal-organic frameworks, enabling their recycling and reuse. This is not possible with current industrial products, from which adsorbent must be sequestered along with captured radioactive iodides.

The metal-organic framework is also cheaper than existing products because it doesn’t use silver or other precious metals, and is very robust, able to handle harsh reprocessing conditions such as high temperatures, high acidity and high humidity, Li said.

“We’re off to a very good start and we’d like to make improvements,” Li said. “Eventually, we hope it can be commercialized.”