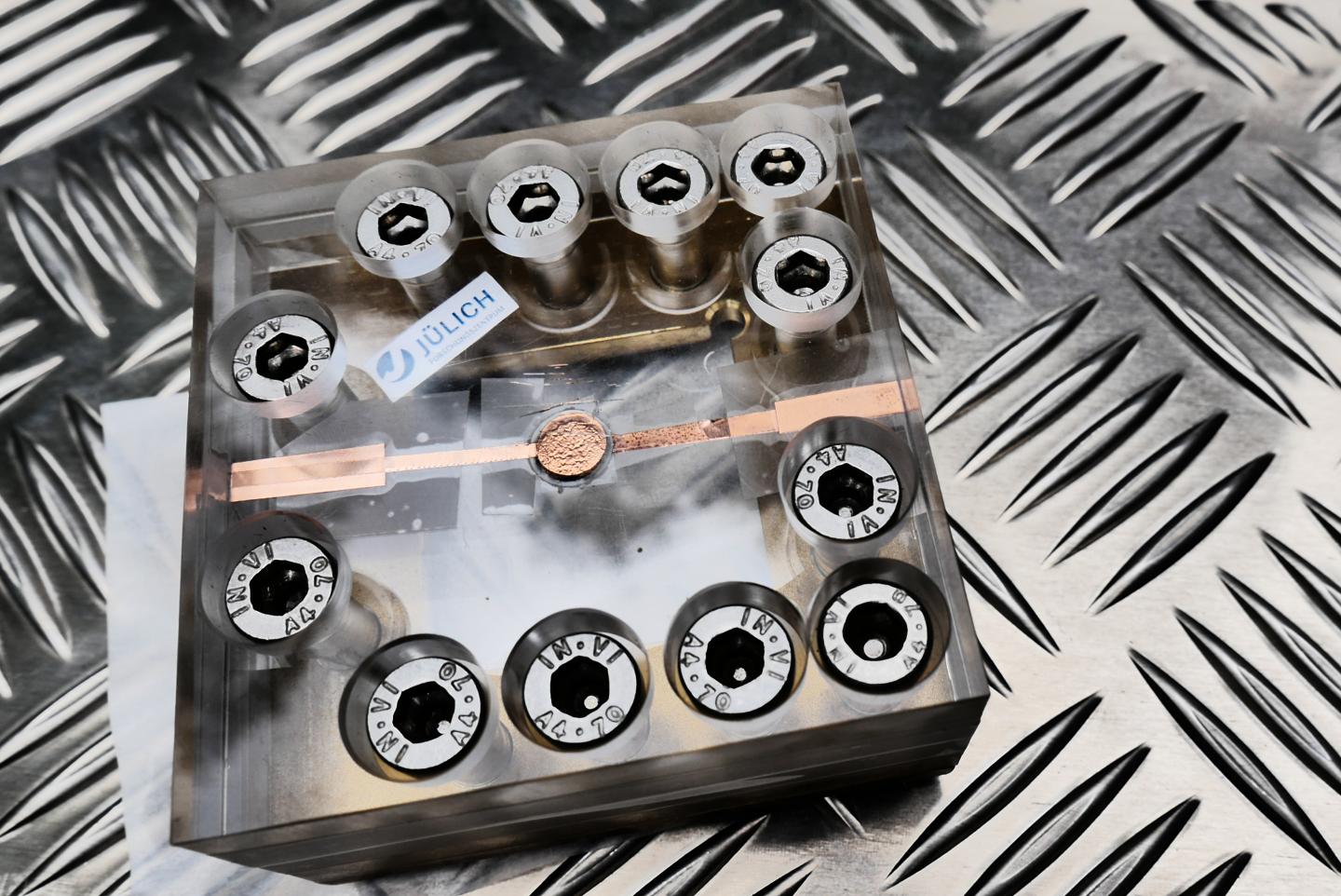 Test set-up for the solid-state battery: the battery of the size of a button cell is located in the middle of the acrylic glass casing, which ensures permanent contact with the battery. Credit: Forschungszentrum Jülich / Regine Panknin

The low current is considered one of the biggest hurdles in the development of solid-state batteries. It is the reason why the batteries take a relatively long time to charge. It usually takes about 10 to 12 hours for a solid-state battery to fully charge. The new cell type that Jülich scientists have designed, however, takes less than an hour to recharge.

“With the concepts described to date, only very small charge and discharge currents were possible due to problems at the internal solid-state interfaces. This is where our concept based on a favourable combination of materials comes into play, and we have already patented it,” explains Dr. Hermann Tempel, group leader at the Juelich Institute for Energy and Climate Research (IEK-9).

“In order to allow the largest possible flow of current across the layer boundaries, we used very similar materials to produce all components. The anode, cathode, and electrolyte were all made from different phosphate compounds to enable charging rates greater than 3C (at a capacity of about 50 mAh/g). This is ten times higher than the values otherwise found in the literature,” explains Hermann Tempel.

The solid electrolyte serves as a stable carrier material to which phosphate electrodes are applied on both sides using the screen printing process. The materials used are reasonably priced and relatively easy to process. Unlike conventional lithium-ion batteries, the new solid-state battery is also largely free of toxic or harmful substances.

“In initial tests, the new battery cell was very stable over 500 charge and discharge cycles and retained over 84 percent of its original capacity,” said Dr. Shicheng Yu. “There is still room for improvement here. Theoretically, a capacity loss of less than 1 percent should even be feasible,” said Yu, who developed and tested the battery as part of a China Scholarship Council (CSC) funding programme at the Jülich Institute for Energy and Climate Research (IEK-9).

Institute director Prof. Ruediger-A. Eichel is also convinced of the advantages of the new battery concept. “The energy density is already very high at around 120 mAh/g, even if it is still slightly below that of today’s lithium-ion batteries,” says Eichel. In addition to the development for electromobility, the spokesman for the “battery storage” topic in the Helmholtz Association believes solid-state batteries will also be used in other areas in future: “Solid-state batteries are currently being developed with priority as energy storage for next-generation electric vehicles. But we also believe that solid-state batteries will prevail in other fields of application that require a long service life and safe operation, such as medical technology or integrated components in the smart home area,” says Eichel.