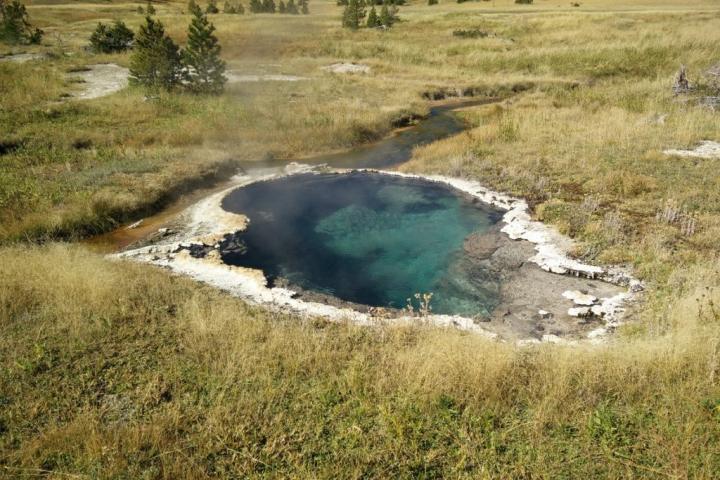 Pools of hot water like this are the home to bacteria that can eat and breathe electricity. Credit: WSU

If harnessed correctly, this bacteria can “eat” pollution by converting toxic pollutants into less harmful substances, while simultaneously generating electricity.

“As these bacteria pass their electrons into metals or other solid surfaces, they can produce a stream of electricity that can be used for low-power applications,” Haluk Beyenal, the Paul Hohenschuh Distinguished Professor in the Gene and Linda Voiland School of Chemical Engineering and Bioengineering, said in a statement.

The discovery was made last summer when WSU graduate student Abdelrhman Mohamed was hiking at Yellowstone National Park with a team of scientists and found four pristine pools of hot water within the isolate paths of the Heart Lake Geyser Basin area.

The hiking scientists carefully left a few electrodes inserted into the edge of the water in an effort to coax bacteria that can eat and breathe electricity out of hiding in the hot springs.

After just 32 days, the researchers returned for another seven-mile hike and to collect the submerged electrodes from the hot springs and captured the heat-loving bacteria that can breathe electricity through the solid carbon surface of the planted electrodes.

“This was the first time such bacteria were collected in situ in an extreme environment like an alkaline hot spring,” Mohamed said in a statement.

The majority of living organisms use electrons in a complex chain of chemical reactions to power themselves. These organisms, which include humans, also need a source for electrons, as well as a place to dump the electrons in order to live. For humans, the electronics come from sugars in food and are passed through breathing oxygen through the lungs, while several types of bacteria dump the electrons to outside metals or minerals by using protruding, hair-like wires.

While the ability of microorganisms to exchange electrons with inert electrodes has sparked new areas of fundamental and applied research, the field is currently limited to several known electrochemically active microorganisms that have been enriched and isolated in research laboratories. Enriching these microorganisms in their native environmental is seen as an alternative strategy, but the lack of available tools has hampered this approach.

To overcome these issues, the researchers invented an inexpensive, battery-powered potentiostat that is able to control the potential of a working electrode. This device can also be deployed and operated remotely in harsh conditions, like the Yellowstone hot springs that can range from between 110 and 200 degrees Fahrenheit.

“The natural conditions found in geothermal features such as hot springs are difficult to replicate in laboratory settings,” Beyenal said. “So, we developed a new strategy to enrich heat-loving bacteria in their natural environment.”

The study was published in the Journal of Power Sources.