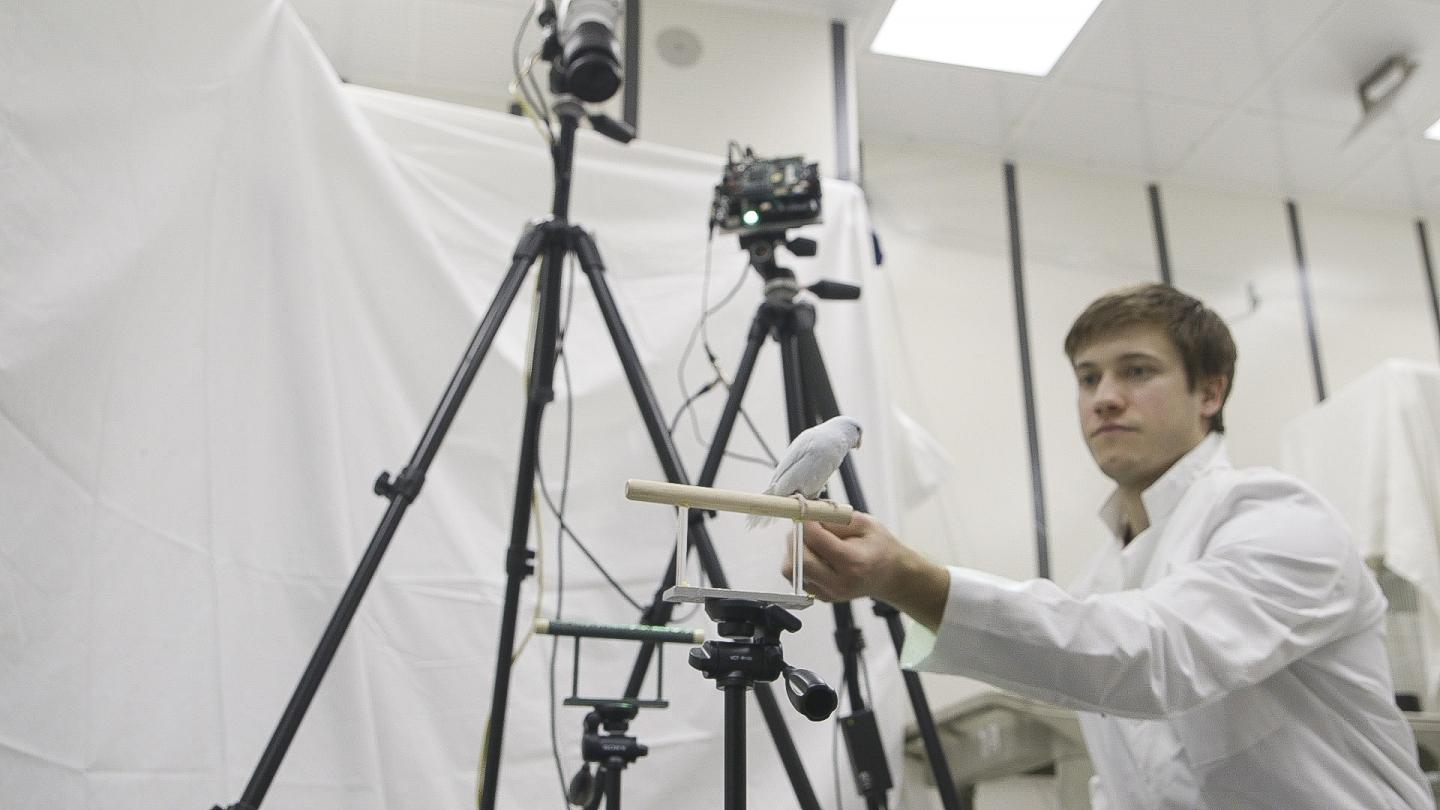 The wind rushing between skyscrapers is a substantial hurdle for anyone interested in operating small drones in urban areas. Yet, pigeons seem to have little trouble maneuvering through turbulent city skies. With sights set on unlocking the secrets of birds’ smooth sailing, researchers at Stanford University have developed a new method for recording the shape of birds’ wings during flight.

“We’re trying to figure out how birds are capable of flying so well in these complex, turbulent environments and a lot of that comes from how they deform the shape of their wings, left versus right, to adjust to gusts quickly,” said David Lentink, an assistant professor of mechanical engineering.

Birds morph their wings through an incredible range of shapes, but until now we’ve known little about the angle, twist and asymmetries of each wing beat. After seven years of development, the Lentink lab may have figured out how to more closely observe birds’ morphing skills. They’ve created a new way of automatically recording wing shape that works at high speeds and results in high-definition 3D reconstructions. Details of their work are published in the March 27 issue Journal of Experimental Biology.

Current techniques for recording animals in motion often rely on tracking markers attached to the animal or features of the animal like stripes or spots, an approach that can’t directly or automatically reconstruct an entire wing surface at high resolution. Other methods, which use patterned light, are more easily automated but are too slow to record bird flight.

The Lentink lab has built on previous structured-light techniques, but its version automatically resolves body shape changes at high speed and in high resolution.

“The great thing about this system is it’s the first fully automated, high-speed reconstruction of birds in the world,” said Marc Deetjen, a graduate student in the Lentink lab and senior author of the paper.

The group’s setup consists of a video camera synced with a projector that projects two overlapping patterns of light. The first layer is a dense grid which, by covering much of the surface of the bird, gives the researchers a high resolution image. The second is a set of unequally spaced lines, like a barcode, projected perpendicular to the first. The irregular second pattern assures that no two areas of the light field look alike. When the bird flies through these patterns, its body acts like a projector screen and the straight lines of light deform based on the bird’s shape.

An algorithm developed by Deetjen matches the deformed pattern on the bird that is captured by the camera with the original projected pattern. It then produces a detailed 3D reconstruction of how the bird moved through the light field.

To test their technique, the researchers trained Gary, a 4-year-old parrotlet, to fly from one perch to another, with the light grid projected onto the bird as it took off. Gary’s light coloring allowed the camera to capture a clear light pattern, like a near-white projector screen. For this paper, the group only recorded the top surface of the bird, but multiple cameras could create a full-body reconstruction in the future.

The researchers intended this as a simple test of their system but ended up with an insight so unexpected and intriguing, they thought it was a mistake. After recording a portion of four of Gary’s downstrokes, they computed the bird’s effective aerodynamic angle of attack – how much the wing flips backward – and found it was consistently between 55 degrees and 75 degrees in the first downstroke and 45 degrees and 60 degrees in the second. Most airplanes stall when the angle of attack reaches about 15 degrees because even this angle can create drag so significant that the airflow becomes separated from the wing, resulting in reduced lift. The researchers concluded that the bird is actually supporting its body weight using drag oriented upward. In addition, the lift it generates is rotated forward so it functions as thrust.

“They’re actually able to generate more total force on lift-off,” said Deetjen. “That enables them to not only push up and overcome gravity but to accelerate forward.”

Details like this could bring us closer to replicating the efficient and acute takeoff of birds in small flying machines, like drones, which are a specialty of the Lentink lab. For their next step, the researchers are planning to apply this technique in a specialized bird wind tunnel to investigate the many mysteries of bird flight in turbulence.

Although the team tested the technique on bird flight, it could be applied to many forms of movement. For example, it could show what happens to a car’s shape during a simulated crash. Lentink says he’s also been talking with a scientist who studies flying snakes in Borneo who might want to give the technique a try.

“This is a technique that goes all the way from animal locomotion to direct applications in engineering, where things deform fast,” said Lentink. “We only need to create one frame and then we can reconstruct the shape in 3D. This technique, in principle, does not have a speed limit.”