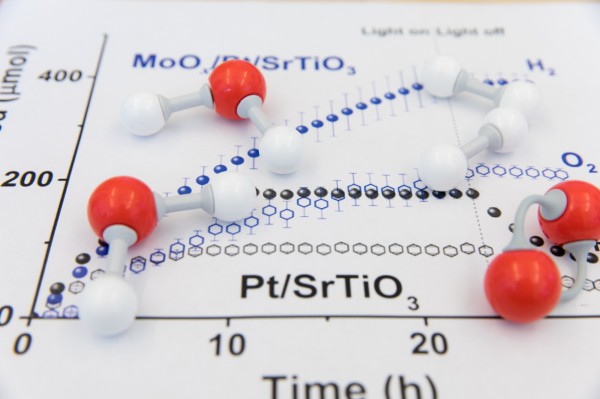 Scientists have developed a new molybdenum-coated catalyst that prevents an unwanted back reaction in certain chemical systems that split water into hydrogen and oxygen. Credit:

Hydrogen is one of the most promising clean fuels for use in cars, houses and portable generators. When produced from water using renewable energy resources, it is also a sustainable fuel with no carbon footprint.

However, water-splitting systems require a very efficient catalyst to speed up the chemical reaction that splits water into hydrogen and oxygen, while preventing the gases from recombining back into water. Now an international research team, including scientists at the Department of Energy’s SLAC National Accelerator Laboratory, has developed a new catalyst with a molybdenum coating that prevents this problematic back reaction and works well in realistic operating conditions.

A key part of the development centered on understanding how the molybdenum coating worked using experiments at SLAC’s Stanford Synchrotron Radiation Lightsource (SSRL), a DOE Office of Science User Facility. The scientists reported their results April 13 in Angewandte Chemie.

“When you split water into hydrogen and oxygen, the gaseous products of the reaction are easily recombined back to water and it’s crucial to avoid this,” said Angel Garcia-Esparza, lead author and currently a postdoctoral researcher from the Ecole Normale Supérieure de Lyon. “We discovered that a molybdenum-coated catalyst is capable of selectively producing hydrogen from water while inhibiting the back reactions of water formation.”

The experiments demonstrated that their molybdenum coating strategy has applications in electrocatalysis and photocatalysis devices, added Garcia-Esparza. These are devices that help drive forward a reaction using electricity or light.

Garcia-Esparza helped develop the new catalyst as a graduate student at King Abdullah University of Science and Technology (KAUST) in Saudi Arabia under the direction of Kazuhiro Takanabe, an associate professor of chemical science at KAUST. Takanabe’s research group explored the stability, performance and function of many different elements before selecting molybdenum as the coating for a standard platinum-based catalyst.

“Finding a coating that worked well in the acid electrolyte used for water splitting was a major challenge for my collaborators, because many materials quickly degrade in the acidic conditions,” said co-author Dimosthenis Sokaras, a staff scientist at SLAC.

Of the coatings they tested, “Molybdenum was the best-performing material in acidic media, where the conditions for hydrogen evolution are favorable and facile,” Garcia-Esparza explained.

Another major challenge was finding a way to measure the properties of their molybdenum-coated catalyst, because these molybdenum compounds are not stable when exposed to air. “Taking the catalyst out of water perturbs the identity of the material,” said Garcia-Esparza. “Therefore, it was necessary to study the electrocatalyst under working conditions, which is difficult.”

So Garcia-Esparza spent a summer performing electrochemistry experiments at SSRL to characterize the new catalyst under operational conditions. “The idea was to work together to see how the molybdenum-coated catalyst performed and determine its electronic structure when it was operating,” said Sokaras. “We wanted to understand why the back reaction doesn’t happen.”

They tested a bare platinum catalyst, with and without a molybdenum coating, during water electrolysis at SSRL, using in operando X-ray absorption spectroscopy with a custom-made electrochemical cell. “At SSRL, we were essentially able to do electrochemistry while analyzing the sample with synchrotron radiation,” Garcia-Esparza said. “The experiments performed at SLAC were the final piece of the puzzle to determine the local structure and state of the electrocatalyst under the operational conditions of hydrogen production.”

“Our findings support that the molybdenum layer acts as a membrane to block the oxygen and hydrogen gases from reaching near the platinum surface, which prevents water formation,” Sokaras said.

In addition, the research team explored photocatalysis applications. They built a photocatalytic water-splitting system using either a standard catalyst of platinum on strontium titanium oxide (Pt/SrTiO3) or the same catalyst coated with molybdenum. Both systems were tested at KAUST with the lights on and off — that is, with and without an energy source driving the water-splitting reaction.

When the light was on, the standard Pt/SrTiO3 catalyst increased hydrogen production for only six hours because the system lost efficiency due to the back reaction. When the lights were then turned off, the amount of hydrogen decreased with time — verifying that significant amounts of the gases were recombining to form water.

In contrast, the molybdenum-coated catalyst continuously split water to generate increasing amounts of hydrogen gas for 24 hours, producing about twice as much hydrogen gas as the standard catalyst in one day. In addition, the amount of hydrogen remained stable in the dark, confirming that the coating inhibited water formation

These results are promising, but more work still needs to be done before the catalyst can be used in a practical device. Sokaras said, “I think we’re far from actually talking about a commercial device, but it is certainly a huge improvement to have this new catalyst material that prevents the back reaction. Now we need to find a way to make the coating more stable so it produces hydrogen for even longer.”