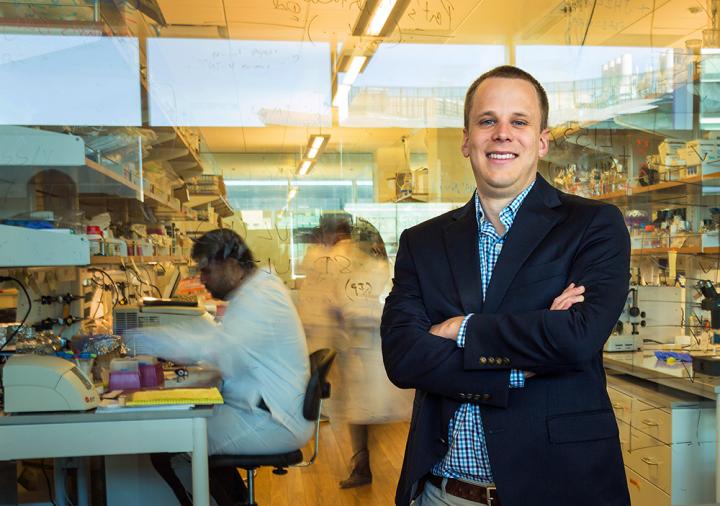 Dr. Zachary Campbell, who researches pain on the molecular level at the University of Texas at Dallas, recently published a study in the journal Nature Communications that describes a new method of reducing pain-associated behaviors with RNA-based medicine, creating a new class of decoy molecules that prevent the onset of pain. The approach blocks the creation of the proteins that set pain in motion after an injury. Credit: University of Texas at Dallas

For anyone who has accidentally injured themselves, Dr. Zachary Campbell not only sympathizes, he’s developing new ways to blunt pain.

“If you have ever hit yourself with a hammer, afterward, even a light touch can be painful for days or even weeks,” said Campbell, who researches pain on the molecular level at The University of Texas at Dallas. “While many of us may not be coordinated enough to avoid an accident, my goal is to disrupt the inception and persistence of pain memories.”

Campbell directs the Laboratory of RNA Control and recently published a study in the journal Nature Communications in close collaboration with Dr. Ted Price, an associate professor from the Pain Neurobiology Research Group, and Dr. Michael Burton, a new assistant professor from the School of Behavioral and Brain Sciences who conducted postdoctoral work at UT Dallas.

This work describes a new method of reducing pain-associated behaviors with RNA-based medicine, creating a new class of decoy molecules that prevent the onset of pain.

“Even simple memories are nothing short of extraordinary,” Campbell said. “To promote healing, our nervous system catalogs our sensory experiences and, under normal circumstances, eventually forgets. Defects in this process can result in chronic pain — a root cause of enormous suffering.”

The need for research in this field is easy to understand.

“Pain is a pervasive and devastating problem,” Campbell said. “It’s the most prominent reason why Americans seek medical attention. Poorly treated pain causes enormous human suffering, as well as a tremendous burden on medical care systems and our society.”

Campbell’s team took the approach of blocking the creation of the proteins that set pain in motion. After an injury, instructions provided by the genome — the full set of genetic instructions present in each cell — are translated to create pain-signaling proteins. Those instructions are encoded in molecules called messenger RNA, or mRNA. The decoy Campbell’s team constructed interrupts the pain-protein synthesis process that mRNA facilitates, reducing signs of inflammation and impairing pain behaviors.

“When you have an injury, certain molecules are made rapidly,” said Campbell, an assistant professor in the Department of Biological Sciences in the School of Natural Sciences and Mathematics. “With this Achilles’ heel in mind, we set out to sabotage the normal series of events that produce pain at the site of an injury. In essence, we eliminate the potential for a pathological pain state to emerge.”

The RNA mimic that Campbell’s team designed was injected at the site of an injury in experiments on mice, and showed the ability to reduce behavioral response to pain.

“We’re manipulating one step of protein synthesis,” Campbell said. “Our results indicate that local treatment with the decoy can prevent pain and inflammation brought about by a tissue injury.”

One huge hurdle in creating such an RNA-based compound was overcoming the rapid metabolism of these molecules.

“Molecules that degrade quickly in cells are not great drug candidates. The stability of our compounds is an order of magnitude greater than unmodified RNA.” Campbell said.

Campbell explained that specialized nerve cells called nociceptors communicate with your brain in response to thermal, chemical and mechanical stimuli.

“Imagine touching a hot stovetop, walking into a wall or getting a paper cut,” he said. “Part of the cellular origin that causes subsequent pain is initiated by nociceptors, but the molecular mechanisms behind these persistent changes are poorly understood. Our study developed a targeted inhibitor that both shed light on these processes and reduced pain sensitization following an injury.”

Campbell emphasized the importance of treating pain at the site of an injury; a major problem with drugs that interact with the central nervous system is that they also can affect the reward center of the brain.

“The ongoing opioid crisis highlights the need for pain treatments that don’t create addictions,” he said. “Hopefully, this is a step in that direction.”

Campbell credits the role of team-based science for the discovery.

“This work was made possible through a tight collaboration between my lab and that of Dr. Price,” Campbell said. “These experiments would not have been possible without Ted’s tremendous support, dedication and broadly insightful character. Ted is an eminent scholar at the interface of translational control and pain. His deep expertise in pain mechanisms permeates the manuscript.

“I feel incredibly fortunate to benefit from outstanding collaborators here at UT Dallas, which has emerged as a key player on the national stage of pain research,” said Campbell, who arrived at the University in 2015.

This study was supported by a $2 million, five-year grant from the National Institutes of Health to study RNA-binding proteins in peripheral neurons. Price and Dr. Joseph Pancrazio, a professor in the Department of Bioengineering in the Erik Jonsson School of Engineering and Computer Science, are collaborators on the grant.

Campbell believes this effort proposes a new method of treating a broad range of medical issues.

“To the best of our knowledge, this is the first attempt to create a chemically stabilized mimic to competitively inhibit RNA to disrupt RNA-protein interactions,” he said. “Our approach suggests that targeting those interactions may provide a new source of pharmacological agents. This proof of concept allows us to open a whole new area of science by virtue of the route that we’re attacking it.”