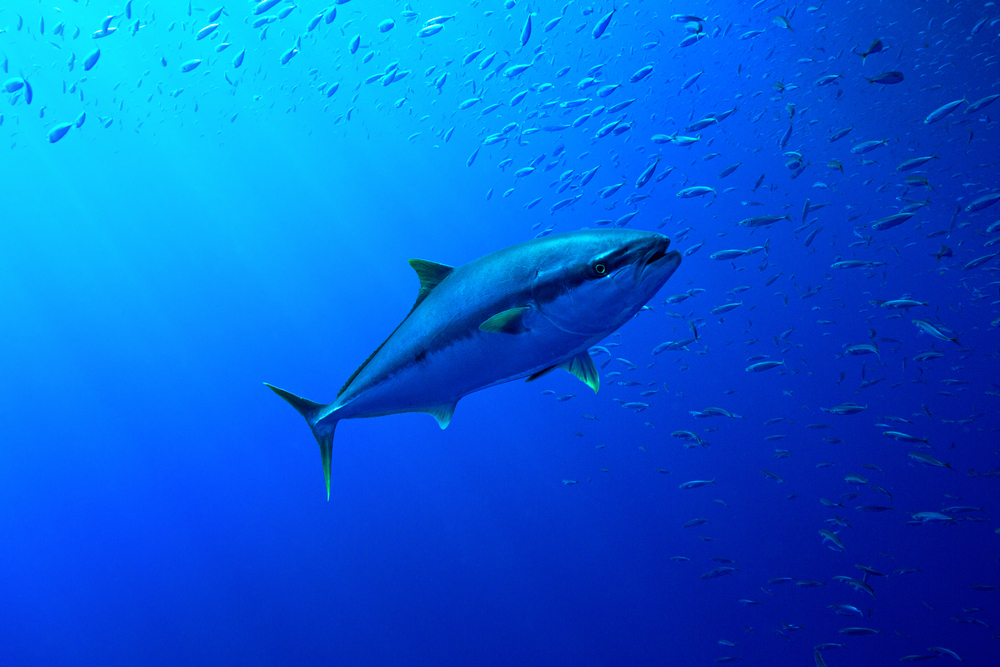 Cutting through the ocean like a jet through the sky, giant bluefin tuna are built for performance, endurance and speed. Just as the fastest planes have carefully positioned wings and tail flaps to ensure precision maneuverability and fuel economy, bluefin tuna need the utmost control over their propulsive and stabilizing structures as they speed through the ocean. The outstanding maneuverability and precision locomotion of these powerful fish are supported by a vascular specialization that is unique among vertebrates, according to new research from Stanford University and the Monterey Bay Aquarium: pressurized hydraulic fin control.

Through studying the anatomy, physiology, locomotion and fin movements of Pacific bluefin and yellowfin tuna swimming in tanks, researchers have found evidence of a biological hydraulic system in the large sickle-shaped fins centered above and below the tuna’s body, called the median fins.

“Animals are exciting sources of elegant engineering solutions in aero- and hydrodynamics. What we have discovered in these tunas is unlike other animal hydraulic systems. It’s a musculo-vascular complex that is integrating the lymphatic system, the skeletal muscles and fin bones,” said Vadim Pavlov, a postdoctoral fellow at Stanford and a lead author of the research, published in the July 21 issue of Science. “We’ve shown that in tunas and their fast-swimming relatives this complex functions to generate hydraulic pressure that provides fine adjustment of the shape of their fins. By expanding or retracting their dorsal and anal fins, they alter the physical forces generated by fins, allowing for maneuverability.”

The tuna’s ability to move these median fins quickly and precisely with a hydrodynamic mechanism may be an advantage in turning maneuvers undertaken during prey search, feeding and long-distance swimming, where careful energy expenditure is vital. This system of hydraulic control could enhance the design used in sailing vessels and autonomous vehicles, many of which already mimic the sleek design of the tuna’s body shape.

Over a decade ago, Barbara Block, the Charles and Elizabeth Prothro Professor in Marine Sciences at Stanford, and colleagues from the Monterey Bay Aquarium introduced Pacific bluefin tuna into the aquarium’s million-gallon Open Sea exhibit.

During her observations of these fish, Block noticed that the Pacific bluefin tuna, which grew to be giants in the exhibit with some reaching over 300 pounds, were making fine adjustments to their pectoral, median and tail fins. These traits became the focus of several Stanford undergraduate internship projects, which involved filming the Pacific bluefin tuna swimming and foraging at the aquarium’s spectacular main exhibit. But it wasn’t until the arrival of Pavlov at the Block lab that the mystery of the median fins was finally solved.

“The finding was unexpected. Pavlov found this sinus area in the fin and associated structures and invited me to see if it was associated with the lymphatic system,” said Benyamin Rosental, a postdoctoral research fellow in stem cell biology and regenerative medicine and a co-lead author of the paper. “I think we realized pretty early that this is a novel finding and a unique system.”

To identify the origin of the vascular input into the hydraulic system and its connection to the lymphatic system, the team took a multidisciplinary approach. The researchers recorded videos of Pacific bluefin and yellowfin tuna swimming in the facilities at the TRCC where close proximity to the fish enabled them to see the subtle changes in angle of attack of the median fins. The footage allowed the researchers to establish how the tuna changed the area and shape of these fins in order to execute different maneuvers. Paired with computer model simulations, the team also showed how fluid flowed across the tuna, impacting the forces generated by the fin at different swimming speeds.

Confirming that the hydraulic system was part of the tuna’s lymphatic system was another challenging task. Although lymphatic systems are critical for immune function, lymphatic fluid has previously not been found to be used as a hydraulic fluid in locomotion. The researchers conducted detailed examinations of the pathways of the vasculature within the fins, studied the microscopic structure of the tissues and tested the cellular makeup of the fluid within this vasculature, which demonstrated it was lymph fluid.

Lymphatic vessels are normally small and difficult to distinguish by the naked eye, but in tuna they are transformed into a specialized system of large vessels and channels in median fins. With lymph acting as hydraulic fluid, increased pressure in these channels affects the fin’s position and, probably, the stiffness that together alters hydrodynamic properties of fins. The capacity to rapidly adjust the fin positions affects the lift to drag forces on the fins and prevents the tuna from rolling and yawing during active swimming, limiting energy loss during long migrations.

Tuna have numerous morphological, physiological and behavioral adaptations to move rapidly through the water column and a sophisticated physiology that includes elevated metabolism, a unique cardiovascular system and a warm body temperature. These features require a well-developed lymphatic system to maintain water balance in tissues and protect organisms from infection. Now, the evolution of tuna physiology can also include this unique hydraulic function.

“The primary examples of bio-hydraulics are in invertebrate animals like mollusks, crustaceans and jellyfish,” Block said. “It’s unusual to observe bio-hydraulic locomotion in vertebrate animals, which involves the integration of muscle, fluid and bone structures. To our knowledge, this evolutionary mechanism of fishes has never before been reported and might have remained hidden if it weren’t for the ability to see these fish in action in captivity. It illuminates how nontransparent our ocean realm is and how much is left to discover.”

From tuna to tech

The dorsal and anal fins are typically oriented straight up and down and are involved in the control of body posture and swimming trajectories. In this way, these median fins are analogous to hydrofoils and generate lift forces, sideways, as the fin plane makes an angle to the water the fish is swimming through. The team found that the biomechanics of tuna’s median fins closely align with the three elements of a canonical hydraulic system: muscles that serve as a hydraulic pump to create pressure in the fluid, vascular vessels to guide and control the system, and fin rays acting as actuators to convert pressure energy into mechanical energy.

“The natural mechanism of hydraulic control of fins could be very attractive in designing of new ‘smart’ control surfaces with changeable shape and stiffness,” Pavlov said. “This could, for example, enhance the maneuverability of the air and underwater unmanned vehicles.”

Rosental hopes to continue researching this lymphatic network to see if structures within it serve the same immunological purpose as lymph nodes in mammals. As part of their ongoing research on the physiology and biomechanics of tuna, the Block lab and the TRCC are currently placing high-tech camera tags with motion sensors on tuna to better understand their swimming kinematics.