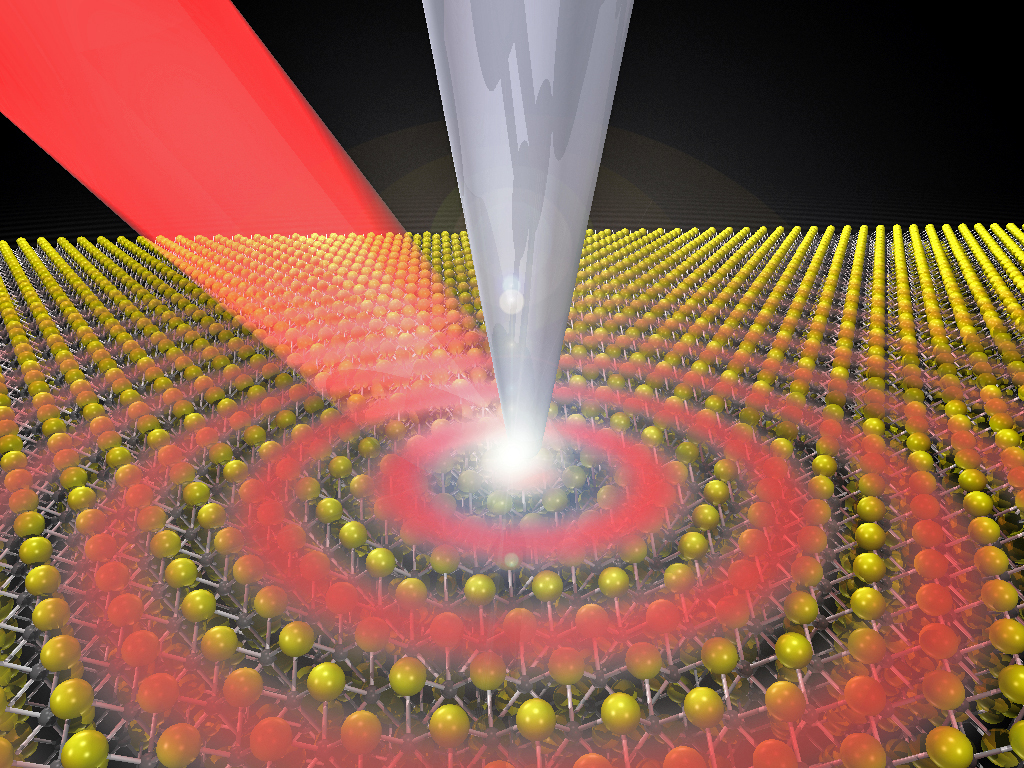 This image shows how researchers launched and studied half-light, half-matter quasiparticles called exciton-polaritons. A laser from the top left shines on the sharp tip of a nano-imaging system aimed at a flat semiconductor. The red circles inside the semiconductor are the waves associated with the quasiparticles. Image courtesy of Zhe Fei.

Zhe Fei pointed to the bright and dark vertical lines running across his computer screen. This nano-image, he explained, shows the waves associated with a half-light, half-matter quasiparticle moving inside a semiconductor.

“These are waves just like water waves,” said Fei, an Iowa State University assistant professor of physics and astronomy and an associate of the U.S. Department of Energy’s Ames Laboratory. “It’s like dropping a rock on the surface of water and seeing waves. But these waves are exciton-polaritons.”

Exciton-polaritons are a combination of light and matter. Like all quasiparticles, they’re created within a solid and have physical properties such as energy and momentum. In this study, they were launched by shining a laser on the sharp tip of a nano-imaging system aimed at a thin flake of molybdenum diselenide (MoSe2), a layered semiconductor that supports excitons.

Excitons can form when light is absorbed by a semiconductor. When excitons couple strongly with photons, they create exciton-polaritons.

It’s the first time researchers have made real-space images of exciton-polaritons. Fei said past research projects have used spectroscopic studies to record exciton-polaritons as resonance peaks or dips in optical spectra. Until recent years, most studies have only observed the quasiparticles at extremely cold temperatures – down to about -450 degrees Fahrenheit.

But Fei and his research group worked at room temperature with the scanning near-field optical microscope in his campus lab to take nano-optical images of the quasiparticles.

“We are the first to show a picture of these quasiparticles and how they propagate, interfere and emit,” Fei said.

The researchers, for example, measured a propagation length of more than 12 microns – 12 millionths of a meter – for the exciton-polaritons at room temperature.

Fei said the creation of exciton-polaritons at room temperature and their propagation characteristics are significant for developing future applications for the quasiparticles. One day they could even be used to build nanophotonic circuits to replace electronic circuits for nanoscale energy or information transfer.

Fei said nanophotonic circuits with their large bandwidth could be up to 1 million times faster than current electrical circuits.

A research team led by Fei recently reported its findings in the scientific journal Nature Photonics. The paper’s first author is Fengrui Hu, an Iowa State postdoctoral research associate in physics and astronomy. Additional co-authors are Yilong Luan, an Iowa State doctoral student in physics and astronomy; Marie Scott, a recently graduated undergraduate at the University of Washington; Jiaqiang Yan and David Mandrus of Oak Ridge National Laboratory and the University of Tennessee; and Xiaodong Xu of the University of Washington.

The researchers’ work was supported by funds from Iowa State and the Ames Laboratory to launch Fei’s research program. The W.M. Keck Foundation of Los Angeles also partially supported the nano-optical imaging for the project.

The researchers also learned that by changing the thickness of the MoSe2 semiconductor, they could manipulate the properties of the exciton-polaritons.

Fei, who has been studying quasiparticles in graphene and other 2-D materials since his graduate school days at University of California San Diego, said his earlier work opened the doors for studies of exciton-polaritons.

“We need to explore further the physics of exciton-polaritons and how these quasiparticles can be manipulated,” he said.

That could lead to new devices such as polariton transistors, Fei said. And that could one day lead to breakthroughs in photonic and quantum technologies.