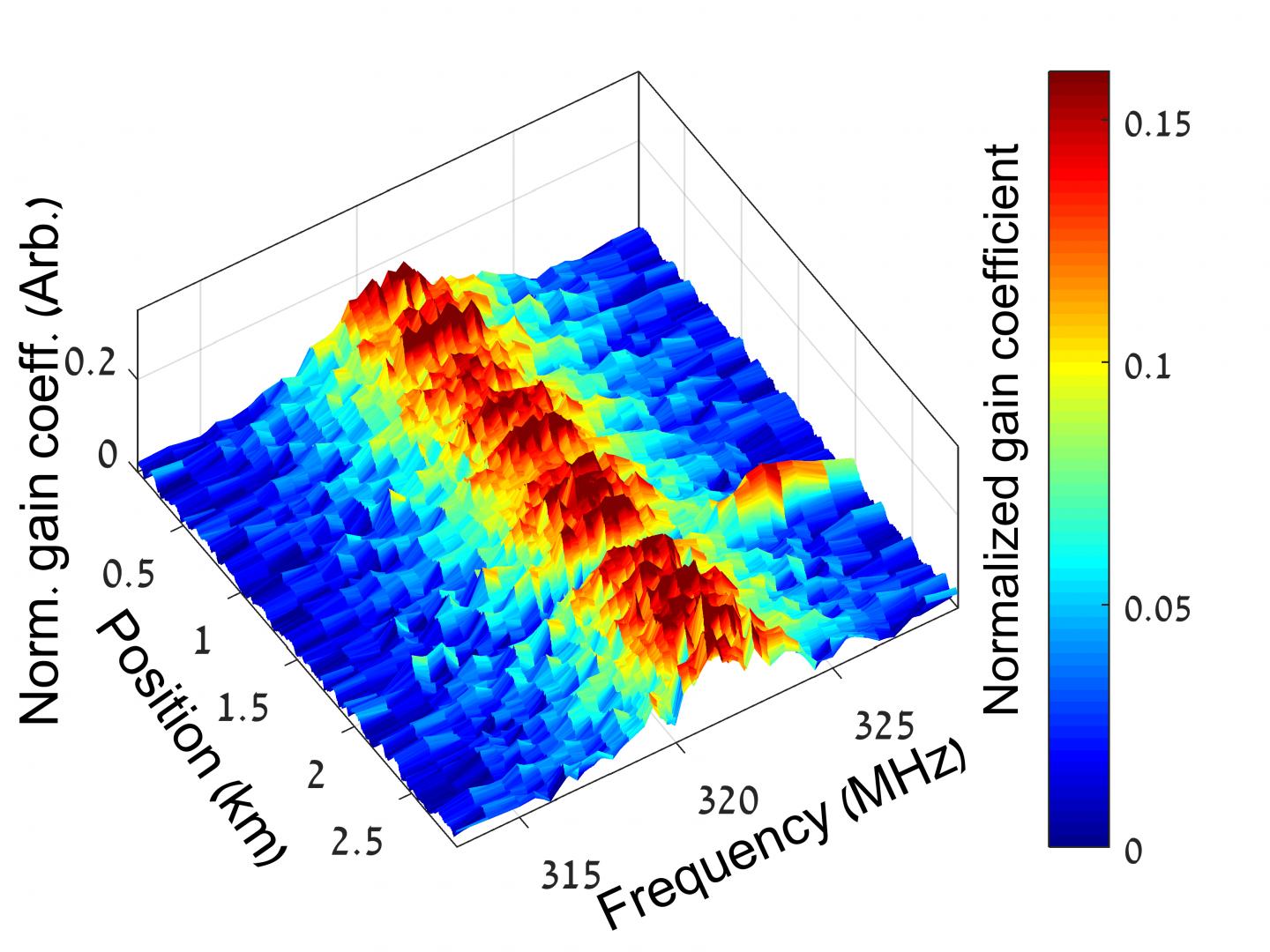 This is a map of the opto-mechanics of a standard optical fiber. Colors denote the strength of the interaction between light and sound waves. A short section, located some 2 km from the input end of the fiber, is coated with a different material. That section is characterized by opto-mechanical response that peaks at a different ultra-sound frequency. The analysis protocol can distinguish between the two coating media even though light in the fiber never leaves the inner core. Credit: Bashan, Diamandi, London, Preter, Zadok

Optical fibers make the internet happen. They are fine threads of glass, as thin as a human hair, produced to transmit light. Optical fibers carry thousands of Giga bits of data per second across the world and back. The same fibers also guide ultrasound waves, somewhat similar to those used in medical imaging.

These two wave phenomena – optical and ultrasonic – possess attributes that are fundamentally different. Fibers are designed to keep propagating light strictly inside an inner core region, since any light that penetrates outside this region represents the loss of a precious signal. In contrast, ultrasonic waves can reach the outer boundaries of fibers, and probe their surroundings.

Intuition, and much of the training given in fundamental undergraduate classes in mechanics and optics, instructs to consider light and sound waves as separate and unrelated entities. But this perspective is incomplete. Propagating light can drive the oscillations of ultrasonic waves, as if it were some kind of transducer, due to the basic rules of electro-magnetism. Likewise, the presence of ultrasound can scatter and modify light waves. Light and sound waves can interact/affect one another and aren’t necessarily separate and unrelated.

The research field of opto-mechanics is dedicated to the study of this interplay. Such studies, especially on fibers, can be very useful and bear surprising results. For example, earlier this year research groups at Bar-Ilan University, Israel and EPFL, Switzerland developed sensing protocols that allow optical fibers to “listen” outside an optical fiber where they cannot “look”, based on an interplay between light waves and ultrasound. By launching light waves into a single end of a standard telecommunication fiber, the measurement setup could identify and map liquid media over several kilometers. These findings were published in two articles (in the journal Nature Communications). Such methods can serve in oil and gas pipelines, monitoring oceans and lakes, climate studies, desalination plants, process control in chemical industries, and more.

The mutual effects of light and sound waves that co-propagate in a fiber continue to draw interest and attention. In a paper just published in the journal Applied Physics Letters – Photonics, the research group of Prof. Avi Zadok, of Bar-Ilan University’s Faculty of Engineering and Institute for Nanotechnology and Advanced Materials, took this study one step further. The group constructed a distributed spectrometer, a measurement protocol that can map local power levels of multiple optical wave components over many kilometers of fiber. “The measurements unravel how the generation of ultrasonic waves can mix these optical waves together. Rather than propagate independently, the opto-mechanical interactions lead to the amplification of certain optical waves, and to the attenuation of others, in complicated fashion. The observed complex dynamics are fully accounted for, however, by a corresponding model,” said Zadok.

The report by Zadok and doctoral students Yosef London, Hagai Diamandi and Gil Bashan is highlighted in the journal as an “Editor’s Pick”. This new insight into the opto-mechanics of optical fibers may now be applied to sensor systems of longer reach, higher spatial resolution, and better precision to assist, for example, in the detection of leaks in reservoirs, dams and pipelines.