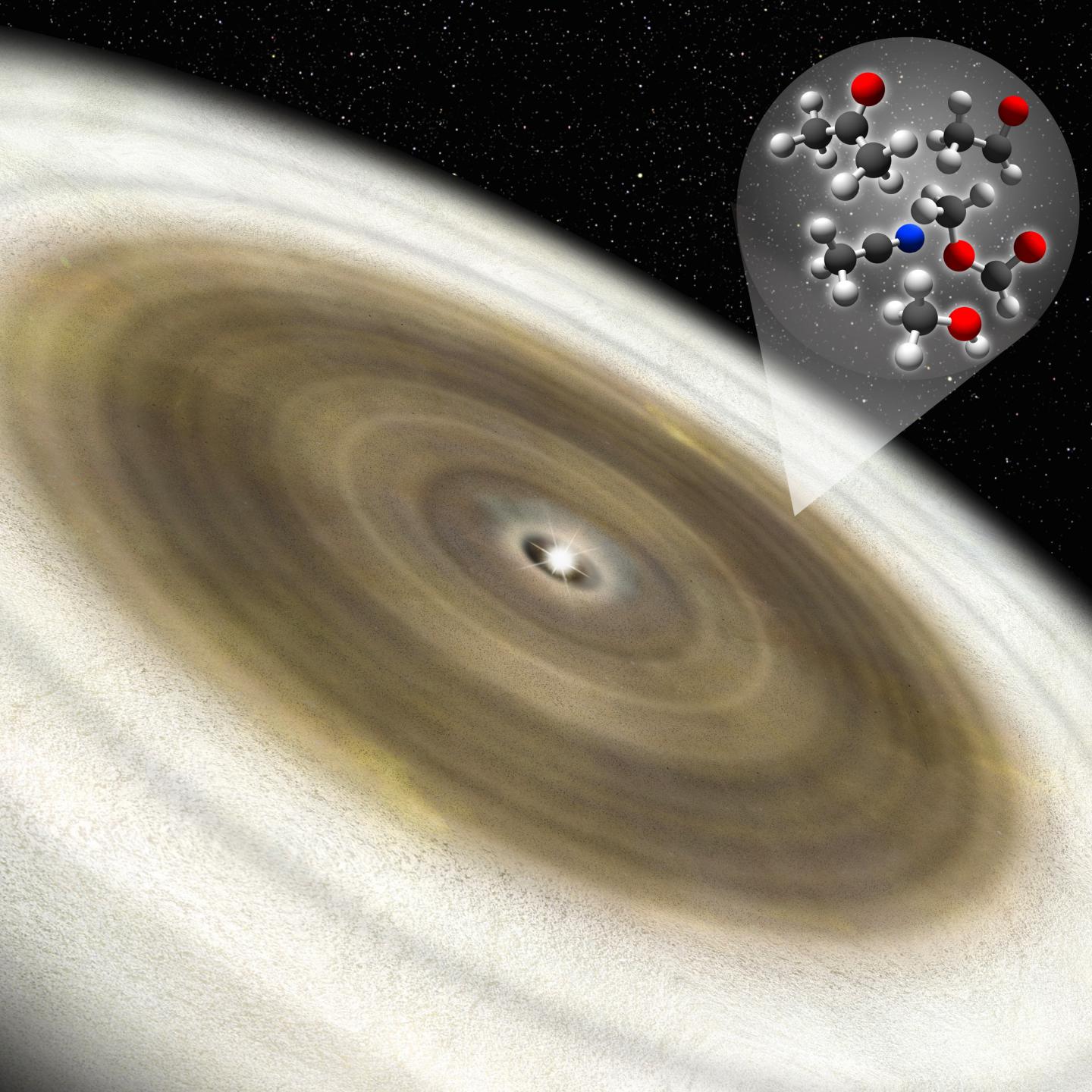 The outer part of the disk is cold and dust particles are covered with ice. ALMA detected various complex organic molecules around the snow line of water in the disk. Credit: National Astronomical Observatory of Japan

Astronomers using ALMA have detected various complex organic molecules around the young star V883 Ori. A sudden outburst from this star is releasing molecules from the icy compounds in the planet forming disk. The chemical composition of the disk is similar to that of comets in the modern Solar System. Sensitive ALMA observations enable astronomers to reconstruct the evolution of organic molecules from the birth of the Solar System to the objects we see today.

Various molecules are frozen in ice around micrometer-sized dust particles in protoplanetary disks. V883 Ori’s sudden flare-up is heating the disk and sublimating the ice, which releases the molecules into gas. The region in a disk where the temperature reaches the sublimation temperature of the molecules is called the “snow line.” The radii of snow lines are about a few astronomical units (au) around normal young stars, however, they are enlarged almost 10 times around bursting stars.

“It is difficult to image a disk on the scale of a few au with current telescopes,” said Lee. “However, around an outburst star, ice melts in a wider area of the disk and it is easier to see the distribution of molecules. We are interested in the distribution of complex organic molecules as the building blocks of life.”

Ice, including frozen organic molecules, could be closely related to the origin of life on planets. In our Solar System, comets are the focus of attention because of their rich icy compounds. For example, the European Space Agency’s legendary comet explorer Rosetta found rich organic chemistry around the comet Churyumov-Gerasimenko. Comets are thought to have been formed in the outer colder region of the proto-Solar System, where the molecules were contained in ice. Probing the chemical composition of ice in protoplanetary disks is directly related to probing the origin of organic molecules in comets, and the origin of the building blocks of life.

Thanks to ALMA’s sharp vision and the enlarged snow line due to the flare-up of the star, the astronomers obtained the spatial distribution of methanol and acetaldehyde. The distribution of these molecules has a ring-like structure with a radius of 60 au, which is twice the size of Neptune’s orbit. The researchers assume that inside of this ring the molecules are invisible because they are obscured by thick dusty material, and are invisible outside of this radius because they are frozen in ice.

“Since rocky and icy planets are made from solid material, the chemical composition of solids in disks is of special importance. An outburst is a unique chance to investigate fresh sublimates, and thus the composition of solids.” says Yuri Aikawa at the University of Tokyo, a member of the research team.

V883 Ori is a young star located at 1300 light-years away from the Earth. This star is experiencing a so-called FU Orionis type outburst, a sudden increase of luminosity due to a bursting torrent of material flowing from the disk to the star. These outbursts last only on the order of 100 years, therefore the chance to observe a burst is rather rare. However, since young stars with a wide range of ages experience FU Ori bursts, astronomers expect to be able to trace the chemical composition of ice throughout the evolution of young stars.