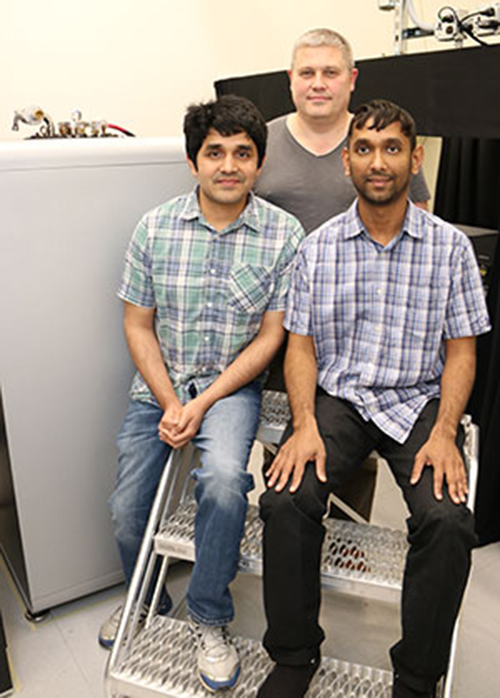 The U.S. Department of Energy’s Ames Laboratory has successfully demonstrated that a new type of optical magnetometer, the NV magnetoscope, can map a unique feature of superconductive materials that along with zero resistance defines the superconductivity itself.

That unique feature is the Meissner effect, which is the expulsion of the magnetic field during a material’s transition to a superconducting state.

“The Meissner effect is the hallmark signature of a true superconductor, which separates it from a hypothetical perfect metal with zero resistance,” said Ruslan Prozorov, an Ames Laboratory physicist who is an expert in superconductivity and magnetism at low temperatures. “That is fine in textbooks and in principle, but in real superconducting materials the Meissner effect is quite complicated. Robust screening of a magnetic field by a superconducting sample and Meissner expulsion upon cooling in a magnetic field can be confused. This effect is actually very weak and fragile and difficult to observe.”

Until now, physicists have been able to observe the Meissner effect, but were unable to visualize its spatial distribution in the material and how that might vary between different superconducting compounds. Now it is possible to map unique and distinguishing features of the Meissner effect, using a very sensitive magnetoscope that takes advantage of the quantum state of a particular kind of an atomic defect, called nitrogen-vacancy (NV) centers, in diamond.

While the science behind using NV centers as sensors has been known, scientists at Ames Laboratory wanted to know if the technology could be harnessed for probing magnetic fields with unprecedented sensitivity and good spatial resolution and apply it to studying various magnetic and superconducting materials.

“This technique, which is minimally invasive and extremely sensitive, is implemented in an optical device that operates successfully while samples are at the low temperatures (4 degrees above absolute zero), which is necessary for quantum materials exploration. This was no trivial undertaking,” said Prozorov.

A member of Prozorov’s group, Ames Laboratory scientist Naufer Nusran, led the development of this unique set-up, and current work used diamond film with NV-centers implanted right beneath the surface to measure larger-scale variation of the magnetic fields.  This is the first scientific paper published measuring the spatial distribution of the Meissner effect using an NV magnetoscope, proving that the technique works and is ready to be deployed to study even more complex problems.

Nusran also partnered with the Center for Nanoscale Materials, a DOE Office of Science user facility at Argonne National Laboratory, to design and fabricate the nanoscale pillars of diamond, each with a single NV center, for the construction of the magnetoscope, which took three years. Deployment of these sensors, now housed in Ames Laboratory’s ultra-low noise Sensitive Instrumentation Facility (SIF), is the next step in research for the Prozorov group in the new lab.

Iron-based superconductors, considered some of the most robust, showed practically none of that “hallmark” Meissner effect.

“This is a big puzzle and we have no explanation,” said Prozorov. “It will be an exciting new avenue in research to understand why this happens.”

BP looks to ORNL, ADIOS to help rein in data