Scientists pursuing computational fluid dynamics (CFD) and combustion research are constantly hungry for more computing power. Consider the study of turbulent combustion, which is important for improving the designs and advancing the efficiency of devices and engines; to keep computation costs in check, scientists must limit the range of the turbulent scales they analyze, which in turn impacts the resolution of simulations. Moreover, current supercomputers aren’t even capable of modeling all scales involved in turbulence in high resolution. Of course, every leap in computing performance helps, so the researchers in the Thermal Science and Engineering Lab (TSEL), which is part of the Department of Mechanical Engineering and Science at Kyoto University in Japan, look forward to pushing the limits of the university’s new Cray XC40 system with Intel Xeon Phi Processors.

The research interests at TSEL extend beyond understanding turbulence and transport phenomena in industrial applications and to the environment, according to Ryoichi Kurose, the head of TSEL and a Professor at Kyoto University. While the lab is heavily focused on chemical reactions and combustion in engines, researchers are also trying to understand the mechanisms behind global warming. From a CFD perspective that means looking at global carbon cycles and how rising heat is impacting the relationship between the atmosphere and oceans through experiments that rely on a combination of wind-wave tunnels and numerical simulations.

Professor Kurose says his lab’s biggest goal is to model and understand the combustion mechanism for devices, including burning velocity, combustion instability, and combustion noise. “Our objective is to develop a computational tool that can accurately predict combustion characteristics, so that computations become the main tool for developing and designing new devices and engines, instead of physical experiment. Without a reliable turbulent combustion model, computations are not only very expensive, but it is impossible to target actual combustion devices,” explains Kurose. 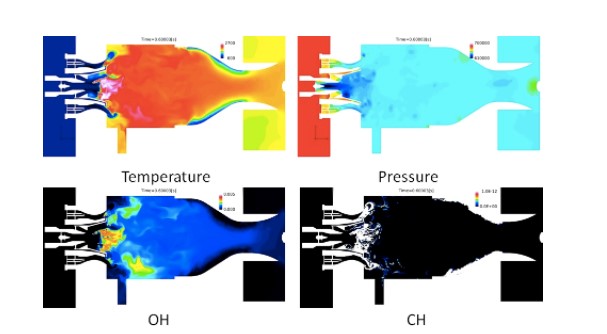 In pursuit of its goal, TSEL is currently working with a group of 11 partners to ready a new research project on advanced numerical simulation technology for combustion and gasification. Kurose says the specific goal of the new project is to streamline design challenges for next-generation combustion and gasification devices, such as aircraft engines, through the ability to more accurately model turbulence, droplet dispersion, and combustion and gasification. The research will be centered around a combination of large-eddy simulations (LES) and direct numerical simulations (DNS). More basic research on things like fuel combustion and ignition delays will rely on the DNS simulations, which compute the full range of spatial and temporal scales in turbulence and quite memory-intensive. The LES technique, on the other hand, focuses on the most important turbulence scales under various conditions to keep computations demands and costs reasonable. In addition to Kyoto University, organizations participating in the project include: 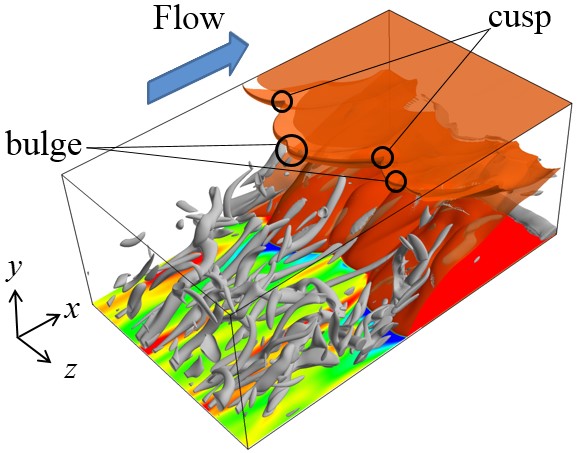 Kyoto University’s new Cray XC40 system has a projected peak performance of 5.48 teraflops, which should result in an approximately two-fold increase in application performance. While Professor Kurose is excited about the jump, he says that his department could easily take advantage of much faster supercomputers as well as improved software for visualizations. “Making visualizations using the big data obtained from computations currently requires significant computational time and disc capacity, and the quality could still be better,” notes Kurose. Since it will likely be many years until TSEL researchers get their hands on “ideal” resources, Kurose’s team is keen to make gains in any way it can, including through code improvements. As part of its efforts, the TSEL team often collaborates with researchers who are familiar with massively parallel computations, in addition to collaborating with scientists at other institutions working on similar research.

A long, exciting road ahead

Although Kurose and his team are confident that improved models can help reduce development costs and time, there is much that needs to be done before computational models can replace most types of traditional experiments. Kurose cites verification and validation (V&V) as one example.  “In addition to the turbulent model, there are other models in the combustion simulation codes that need to be validated and improved as needed, such as the combustion model, radiation model, liquid fuel evaporation model, and wall heat transfer model…Each model should be assessed and validated individually through comparisons with experiments or theories because the accuracy of these models often depends on combustion conditions,” says Kurose.

Regardless of the modeling and computing hurdles ahead, the TSEL team can always fall back on the expertise from the Academic Center for Computing and Media Studies (ACCMS), which oversees the Supercomputing Research Laboratory at Kyoto University, for computing help. “We not only aim to provide our users with high performance computing systems that take advantage of recent innovations, such as the Xeon Phi processors, but we also do everything we can to help ease the transition to new technology through collaborative research programs,” notes Professor Hiroshi Nakashima, Chair of the ACCMS Supercomputing Service Committee. No doubt that help and the new system will be invaluable in deepening researchers’ understanding of what happens during turbulent combustion and how to advance engine designs.