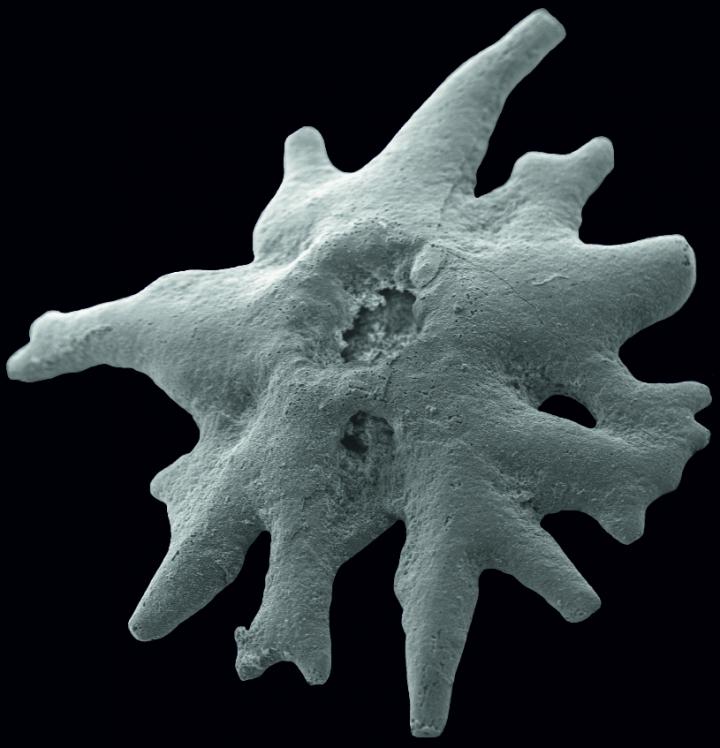 Microscope image of one fossilized holdfast from a juvenile crinoid discovered in the Alps. Source: Image courtesy of The Ohio State University.

An unusual fossil find is giving scientists new ideas about how some of the earliest animals on Earth came to dominate the world’s oceans.

Researchers collected the rock from a formation on the border between Italy and Austria known as the Cardiola Formation, which was exposed in trenches dug during World War I.

Crinoids were abundant long ago, when they carpeted the sea floor. Most stalked crinoid fossils depict spindly, plantlike animals anchored to sea floor rocks, explained William Ausich, professor of earth sciences at The Ohio State University and co-author of the study in the open-access journal Geologica Acta.

Fossils of juvenile crinoids are rare, he said.

Rarer still is that these newly uncovered crinoids weren’t attached to rocks when they died. Whatever they were attached to during their young lives didn’t survive fossilization.

“The fossils indicate that they were either attached to objects floating in the water at the time, or attached to another bottom dweller that lacked preservable hard parts,” said Ausich said.

They might have clung to free-floating algae beds or swimming cephalopods, either of which could have carried them far away from where they formed as larvae.

Modern sea lilies reproduce by ejecting sperm and eggs into the water. Larvae grow into free-floating juvenile animals and eventually attach to the ocean bottom, where they grow to adulthood within 18 months.

At least, that’s what sea lilies do today. This fossil find suggests that their distant ancestors sometimes settled on objects that carried them far from home before they reached reproductive age.

“We now have important information about the behavior of these ancient organisms, and a clue as to why they had such a wide geographic distribution,” Ausich said.

With long, stem-like bodies topped with feathery fronds, crinoids resembled flowers, though the center of the “flower” was a mouth, and the “petals” were arms that captured plankton for food. At the other end of the creature was star-shaped organ called a holdfast, which gripped the seafloor.

While some of today’s sea lilies are able to detach their holdfasts from the seafloor and walk short distances on their arms, they don’t do it often. If their crinoid ancestors spent their entire adult lives similarly anchored to one spot, they couldn’t have spread worldwide without help.

Fossilized holdfasts are all that remain of the young crinoids uncovered in the Alps, and that’s not unusual, Ausich said.

“The hard part about studying the fossils that I study is that they need to be buried alive in order to be completely preserved,” he explained. “Crinoids and other echinoderms have a skeleton comprised of innumerable individual calcite plates held together by various connective soft tissues. These tissues begin to decompose within a day of an organism’s death.

“So, having only parts [of crinoids] rather than whole organisms is actually the norm–as frustrating as that may be.”

The sediment that eventually covered these young crinoids must have been rich in iron, because the holdfasts were preserved as minerals of iron oxide–and that detail is unusual, he added.

Today, the fossil holdfasts look like rusty star-shaped rings. The stars measure only 1 to 4 millimeters across, meaning they came from very young, post-larval juveniles.

The tiny fossils might have been hard to isolate from the surrounding rock, but researchers were able to take advantage of the presence of iron oxide to dissolve the limestone and pull the fossils from the resulting slurry with a magnet.

Researchers had actually collected rock samples from the Cardiola Formation long ago, Ausich said. The area contains abundant fossils, including ancient corals and trilobites. But only recently did anyone discover that these particular rock samples also contained the crinoid holdfasts.

Researchers are interested in crinoids not just because they’re part of Earth’s history, but because the various crinoid species were able to survive millions of years of climate changes to become the sea lilies we know today.