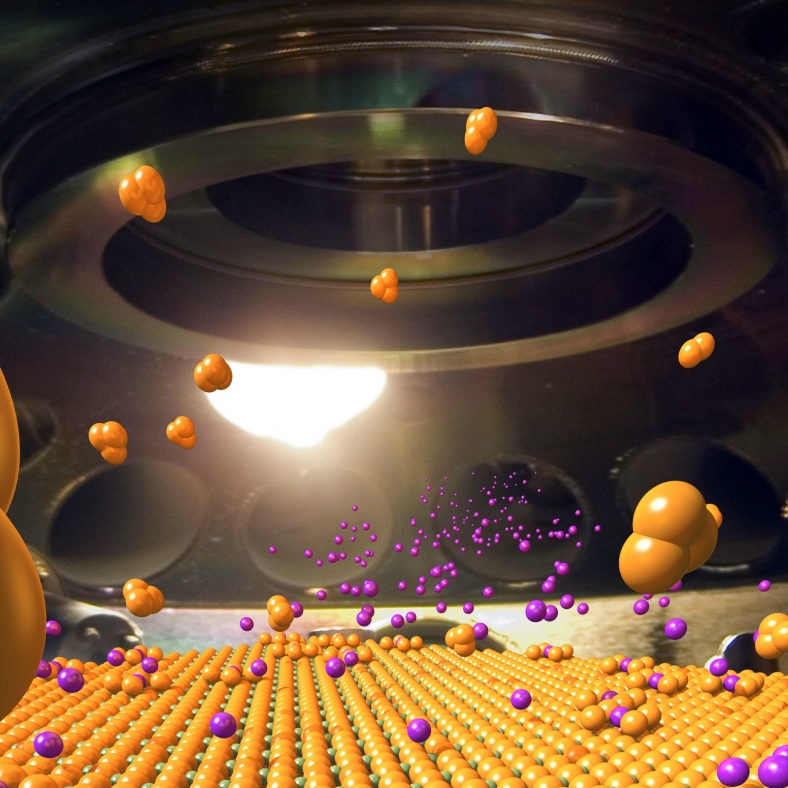 This composite image offers a glimpse inside the custom system Brookhaven scientists used to create samples of materials that may pave the way for high-temperature superconductors. | Image courtesy of Brookhaven National Lab.

These mind-boggling materials allow electric current to flow freely without resistance. But that generally only happens at temperatures within a few degrees of absolute zero (minus 459 degrees Fahrenheit), making them difficult to deploy today. However, if we’re able to harness the powers of superconductivity at room temperature, we could transform how energy is produced, stored, distributed and used around the globe.

In a recent breakthrough, scientists at the Department of Energy’s Brookhaven National Laboratory got one step closer to understanding how to make that possible. The research, led by physicist Ivan Bozovic, involves a class of compounds called cuprates, which contain layers of copper and oxygen atoms.

Under the right conditions — which, right now, include ultra-chilly temperatures — electrical current flows freely through these cuprate superconductors without encountering any “roadblocks” along the way. That means none of the electrical energy they’re carrying gets converted to heat. If you’ve ever rested your laptop on your lap, you’ve felt the heat lost by a non-superconducting material.

Creating the right conditions for superconductivity in cuprates also involves adding other chemical elements such as strontium. Somehow, adding those atoms and chilling the material causes electrons — which normally repel one another — to pair up and effortlessly move together through the material. What makes cuprates so special is that they can achieve this “magical” state of matter at temperatures a hundred degrees or more above those required by standard superconductors. That makes them very promising for real-world, energy-saving applications.

To figure out the mystery of “high-temperature” superconductivity in the cuprates, scientists need to understand how the electrons in these materials behave. Bozovic’s team has now solved part of the mystery by determining what exactly controls the temperature at which cuprates become superconducting.

The standard theory of superconductivity says that this temperature is controlled by the strength of the electron-pairing interaction, but Bozovic’s team has discovered otherwise. After 10 years of preparing and analyzing more than 2,000 samples of a cuprate with varying amounts of strontium, they found that the number of electron pairs within a given area (say, per cubic centimeter), or the density of electron pairs, controls the superconducting transition temperature. In other words, it’s not the forces between objects that matter here, but the density of objects–in this case, electron pairs.

The scientists arrived at this conclusion by measuring how far a magnetic field was able to get through each sample. This distance is directly related to the density of electron pairs, and the distance differs depending on the material’s properties. In superconductors, the magnetic field is mostly expelled; in metals, the magnetic field permeates. With too much strontium, the cuprate becomes more conductive because the number of mobile electrons increases. Yet the scientists found that as they added more strontium, the number of electron pairs decreased until absolutely no electrons paired up at all. At the same time, the superconducting transition temperature dropped toward zero. Bozovic and his team were quite surprised at this discovery that only a fraction of the electrons paired up, even though they all should have.

Think of it like this: You’re in a dance hall, and at some point, you and the other people — who normally wouldn’t be caught arm-in-arm — begin to pair up and move in unison. Some newcomers arrive, and they too pair up and join the harmonious dance. But then something strange happens. No matter how many more people make their way to the dance floor, only a fraction of them pair, even though they are all free to do so. Eventually, nobody pairs up at all.

Why do the dancers, or electrons, pair up in the first place? Answering that question is the next step toward unlocking the mechanism of high-temperature superconductivity in the cuprates — a mystery that’s been puzzling physicists for more than 30 years.