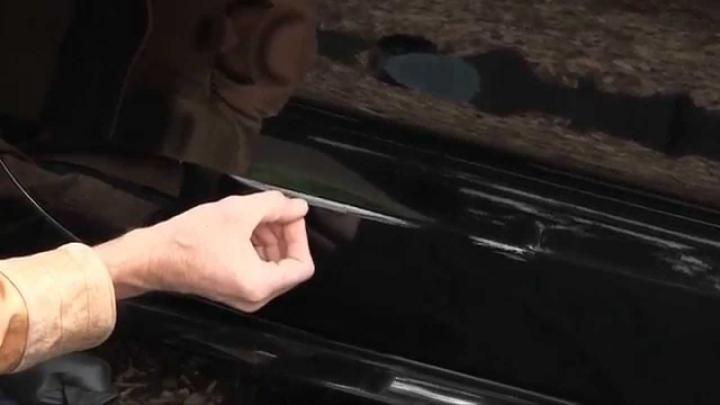 Led by Dr Elton Santos from the University’s School of Mathematics and Physics, an international team of researchers have found superlubricity in a few layers of graphene – a concept where friction vanishes or very nearly vanishes. The experts also found that a few layers of hexagonal boron nitride (h-BN) are as strong as diamond but are more flexible, cheaper and lighter.

The findings, which have been reported in Nature Communications, reveal that the h-BN layers form the strongest thin insulator available globally and the unique qualities of the material could be used to create flexible and almost unbreakable smart devices, as well as scratch-proof paint for cars.

Dr Santos explains: “We have all at some point in life stepped on a slippery surface where we have to steady our balance so that we don’t fall. In most cases, liquid such as water or oil is the cause and this slippery state is what we describe as superlubricity – there is basically no friction on a surface.

“In graphene, this superlubricity state comes from atomic orbitals that compose carbon atoms. Normally, to generate friction some orbitals must overlap and heat, or some energy, must be released. Surprisingly, our research shows that graphene does not require this process, it just spontaneously slides on top of other layers but does not release heat. This means that graphene, which is 300 times stronger than steel, becomes mechanically weaker and can easily break.”

The research findings around the h-BN layers show that its mechanical properties are similar to diamond but are much cheaper, more flexible and lighter. It can easily be integrated in tiny electronic circuits or to reinforce structures as it is more robust against shocks or mechanical stress.

Dr Santos commented: “It has been a privilege to work with global researchers to predict and measure multilayer graphene and h-BN in an unprecedented way. It is nearly impossible at present to make major breakthroughs in science without working in collaboration. At Queen’s University we have advanced our knowledge of these layered materials and have made some major discoveries, which could help to tackle many global challenges within our society.

“Our key finding is that bilayer graphene develops a super-lubricity state where no heating is generated as the layers slide on top of each other. Just a few materials have these features and it looks like graphene has joined this exclusive club. During this process, we also discovered that h-BN, a common lubricant used in several automotive and industrial applications, developed a mechanical strength in a few layers. These are as strong as diamond, measured in terms of a quantity called Young modulus. This is a truly ground-breaking finding as even an insulator with thin layers could not keep its Young modulus at such high magnitudes.

“There are several possibilities for application of our discoveries which could have a positive impact in the real world. We are looking at a timeline of around five to ten years to transform the discoveries into real products but we could see benefits such as material reinforcement to mixture in solutions such as ink for paint, which would give further strength against corrosion and could potentially mean scratch-proof cars in future.

“This stretchy material could also be used in electronic devices and motor engines to make friction very low, as no heat is released.”

Dr Santos added: “In electronics, several companies are currently integrating h-BN in prototypes together with graphene for the creation of smart-devices such as iPads and Androids with unique features. These companies are also incorporating h-BN with polymers to give additional strength for novel mechanical applications such as aerospace, sports and civil engineering.

“We are currently looking for other combinations of 2D crystals which could be used for similar applications. So far, graphene seems the best candidate but there is still much to be explored within the library of layered materials. The future is bright for 2D materials because of the development, progress and research currently being performed worldwide.”