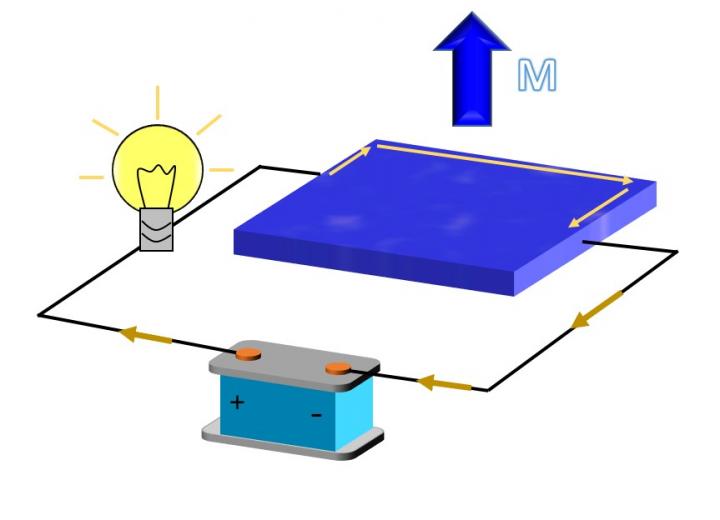 An exotic magnetic insulator conducts electricity along its edges without energy loss. The M stands for magnetization of the magnet. Credit: Wenbo Wang/Rutgers University-New Brunswick

A Rutgers-led team of physicists has demonstrated a way to conduct electricity between transistors without energy loss, opening the door to low-power electronics and, potentially, quantum computing that would be far faster than today’s computers.

Their findings, which involved using a special mix of materials with magnetic and insulator properties, are published online in Nature Physics.

“This material, although it’s much diluted in terms of magnetic properties, can still behave like a magnet and conducts electricity at low temperature without energy loss,” said Weida Wu, senior author of the study and associate professor in the Department of Physics and Astronomy at Rutgers University-New Brunswick. “At least in principle, if you can make it work at a higher temperature, you can use it for electronic interconnections within silicon chips used in computers and other devices.”

Study co-authors in China combined chromium and vanadium as magnetic elements with an insulator consisting of bismuth, antimony and tellurium. When electrons in this special material are aligned in one direction – like a compass needle pointing north – an electric current can only flow along its edges in one direction, leading to zero energy loss. That means electricity could be conducted between transistors within silicon chips used in computers and other electronics with maximum efficiency.

Current silicon chips use primarily metal for electrical interconnections in transistors, but that leads to substantial energy loss, Wu said.

The scientists demonstrated the uniform alignment of spinning electrons in the special magnetic insulator – called the quantum anomalous Hall insulator. It conducts electricity without energy loss when the temperature is close to absolute zero: minus 459.67 degrees Fahrenheit. Next steps would include demonstrating the phenomenon at a much higher and more practical temperature for electronics, along with building a platform for quantum computing.