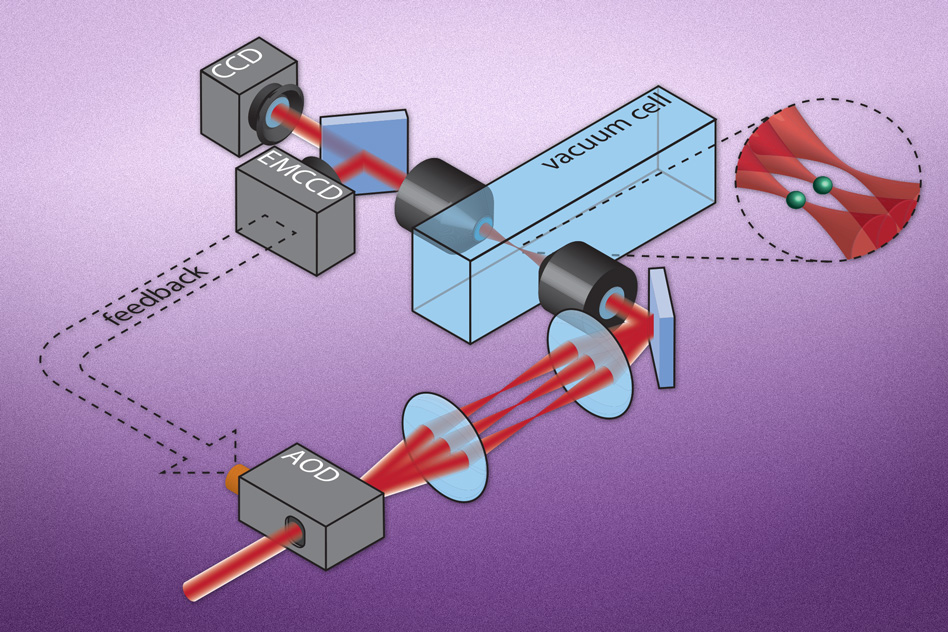 This image shows the basic setup that enables researchers to use lasers as optical “tweezers” to pick individual atoms out from a cloud and hold them in place. The atoms are imaged onto a camera, and the traps are generated by a laser that is split into many different focused laser beams. This allows a single atom to be trapped at each focus. Courtesy of the researchers

Atoms, photons, and other quantum particles are often capricious and finicky by nature; very rarely at a standstill, they often collide with others of their kind. But if such particles can be individually corralled and controlled in large numbers, they may be harnessed as quantum bits, or qubits — tiny units of information whose state or orientation can be used to carry out calculations at rates significantly faster than today’s semiconductor-based computer chips.

In recent years, scientists have come up with ways to isolate and manipulate individual quantum particles. But such techniques have been difficult to scale up, and the lack of a reliable way to manipulate large numbers of atoms remains a significant roadblock toward quantum computing.

Now, scientists from Harvard and MIT have found a way around this challenge. In a paper published today in the journal Science, the researchers report on a new method that enables them to use lasers as optical “tweezers” to pick individual atoms out from a cloud and hold them in place. As the atoms are “trapped,” the scientists use a camera to create images of the atoms and their locations. Based on these images, they then manipulate the angle of the laser beams, to move individual atoms into any number of different configurations.

The team has so far created arrays of 50 atoms and manipulated them into various defect-free patterns, with single-atom control. Vladan Vuletic, one of the paper’s authors and the Lester Wolfe Professor of Physics at MIT, likens the process to “building a small crystal of atoms, from the bottom, up.”

“We have demonstrated a reconfigurable array of traps for single atoms, where we can prepare up to 50 individual atoms in separate traps deterministically, for future use in quantum information processing, quantum simulations, or precision measurements,” says Vuletic, who is also a member of MIT’s Research Laboratory of Electronics. “It’s like Legos of atoms that you build up, and you can decide where you want each block to be.”

The paper’s other senior authors are lead author Manuel Endres and Markus Greiner and Mikhail Lukin of Harvard University.

The team designed its technique to manipulate neutral atoms, which carry no electrical charge. Most other quantum experiments have involved charged atoms, or ions, as their charge makes them more easily trappable. Scientists have also shown that ions, under certain conditions, can be made to perform quantum gates — logical operations between two quantum bits, similar to logic gates in classical circuits. However, because of their charged nature, ions repel each other and are difficult to assemble in dense arrays.

Neutral atoms, on the other hand, have no problem being in close proximity. The main obstacle to using neutral atoms as qubits has been that, unlike ions, they experience very weak forces and are not easily held in place.

“The trick is to trap them, and in particular, to trap many of them,” Vuletic says. “People have been able to trap many neutral atoms, but not in a way that you could form a regular structure with them. And for quantum computing, you need to be able to move specific atoms to specific locations, with individual control.”

To trap individual neutral atoms, the researchers first used a laser to cool a cloud of rubidium atoms to ultracold, near-absolute-zero temperatures, slowing the atoms down from their usual, high-speed trajectories. They then directed a second laser beam through an instrument that splits the laser beam into many smaller beams, the number and angle of which depend on the radio frequency applied to the deflector.

The researchers focused the smaller laser beams through the cloud of ultracold atoms and found that each beam’s focus — the point at which the beam’s intensity was highest — attracted a single atom, essentially picking it out from the cloud and holding it in place.

“It’s similar to charging up a comb by rubbing it against something woolen, and using it to pick up small pieces of paper,” Vuletic says. “It’s a similar process with atoms, which are attracted to regions of high intensity of the light field.”

While the atoms are trapped, they emit light, which the scientists captured using a charge-coupled-device camera. By looking at their images, the researchers were able to discern which laser beams, or tweezers, were holding atoms and which were not. They could then change the radio frequency of each beam to “switch off” the tweezers without atoms, and rearrange those with atoms, to create arrays that were free of defects. The team ultimately created arrays of 50 atoms that were held in place for up to several seconds.

“The question is always, how many quantum operations can you perform in this time?” Vuletic says. “The typical timescale for neutral atoms is about 10 microseconds, so you could do about 100,000 operations in a second. We think for now this lifetime is fine.”

Now, the team is investigating whether they can encourage neutral atoms to perform quantum gates — the most basic processing of information between two qubits. While others have demonstrated this between two neutral atoms, they have not been able to retain quantum gates in systems involving large numbers of atoms.  If Vuletic and his colleagues can successfully induce quantum gates in their systems of 50 atoms or more, they will have taken a significant step toward realizing quantum computing.

“People would also like to do other experiments aside from quantum computing, such as simulating condensed matter physics, with a predetermined number of atoms, and now with this technique it should be possible,” Vuletic says. “It’s very exciting.”

This research was supported in part by the National Science Foundation and the National Security Science and Engineering Faculty Fellowship.