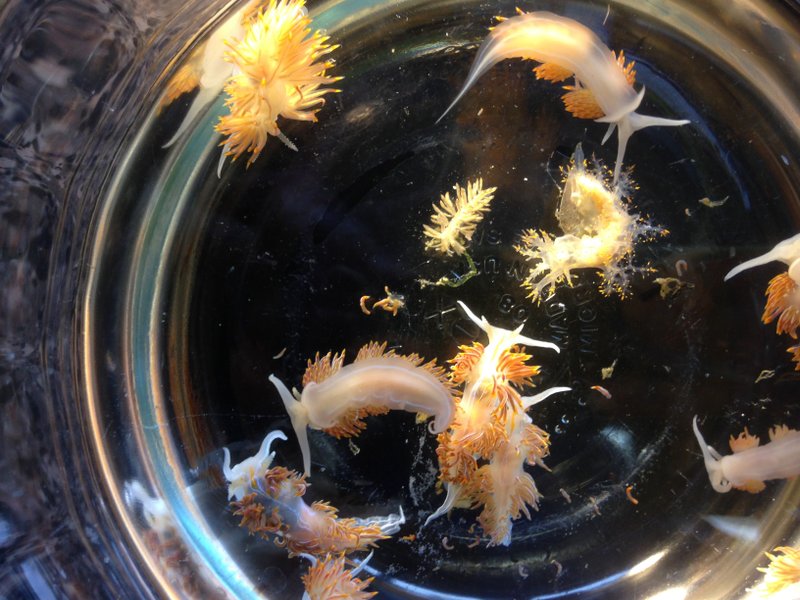 This April 2015 photo provided by John W. Chapman shows marine sea slugs from a derelict vessel from Iwate Prefecture, Japan which washed ashore in Oregon. On Thursday, Sept. 27, 2017, researchers reported nearly 300 species of fish, mussels and other sea creatures hitchhiked across the Pacific Ocean on debris from the 2011 Japanese tsunami, washing ashore alive in the United States. (John W. Chapman via AP)

Nearly 300 species of fish, mussels and other sea critters hitchhiked across the Pacific Ocean on debris from the 2011 Japanese tsunami, washing ashore alive in the United States, researchers reported Thursday.

It is the largest and longest marine migration ever documented, outside experts and the researchers said. The scientists and colleagues combed the beaches of Washington, Oregon, California, British Columbia, Alaska and Hawaii and tracked the species to their Japanese origins. Their arrival could be a problem if the critters take root, pushing out native species, the study authors said in Thursday’s journal Science.

It will be years before scientists know if the 289 Japanese species thrive in their new home and crowd out natives. The researchers roughly estimated that a million creatures traveled 4,800 miles (7,725 kilometers) across the Pacific Ocean to reach the West Coast, including hundreds of thousands of mussels.

Invasive species is a major problem worldwide with plants and animals thriving in areas where they don’t naturally live. Marine invasions in the past have hurt native farmed shellfish, eroded the local ecosystem, caused economic losses and spread disease-carrying species, said Bella Galil, a marine biologist with the Steinhardt Museum of Natural History in Tel Aviv, Israel, who wasn’t part of the study.

A magnitude 9 earthquake off the coast of Japan triggered a tsunami on March 11, 2011, that swept boats, docks, buoys and other man-made materials into the Pacific. The debris drifted east with an armada of living creatures, some that gave birth to new generations while at sea.

The researchers collected and analyzed the debris that reached the West Coast and Hawaii over the last five years, with new pieces arriving Wednesday in Washington. The debris flowed across the North Pacific current, as other objects do from time to time, before it moved north with the Alaska current or south with the California current. Most hit Oregon and Washington.

Last year, a small boat from Japan reached Oregon with 20 good-sized fish inside, a kind of yellowtail jack native to the western Pacific, Carlton said. Some of the fish are still alive in an Oregon aquarium. Earlier, an entire fishing ship — the Sai sho-Maru — arrived intact with five of the same 6-inch fish swimming around inside.

Co-author Gregory Ruiz, a Smithsonian marine ecologist, is especially interested in a Japanese parasite in the gills of mussels. Elsewhere in the world, these parasites have taken root and hurt oyster and mussel harvests and they hadn’t been seen before on the West Coast.

The researchers note another huge factor in this flotilla: plastics.

“It was the plastic debris that allowed new species to survive far longer than we ever thought they would,” Carlton said.

James Byers, a marine ecologist at the University of Georgia in Athens, who wasn’t part of the study, praised the authors for their detective work. He said in an email that the migration was an odd mix of a natural trigger and human aspects because of the plastics.

“The fact that communities of organisms survived out in the open ocean for long time periods (years in some cases) is amazing,” he wrote.