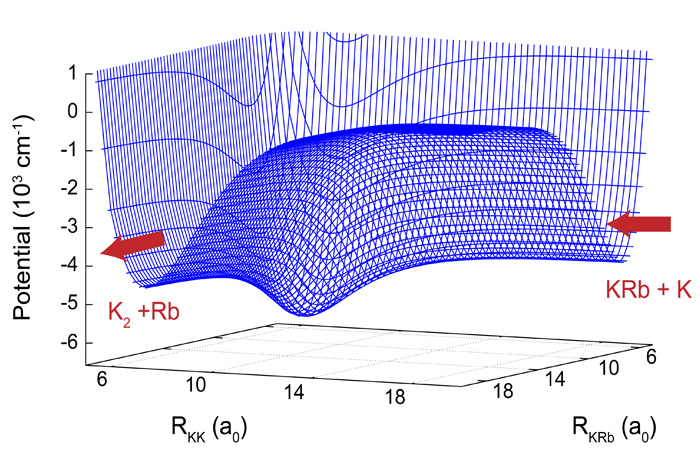 A two-dimensional slice of the potential energy surface for the K + KRb reaction. The reaction proceeds from right to left. In the intermediate region a deep well is clearly visible which leads to chaotic motion. Source: LANL

“We found that the overall reactivity is largely insensitive to the underlying chaotic dynamics of the system,” said Brian Kendrick of Los Alamos National Laboratory’s Theoretical Division, “This observation has important implications for the development of controlled chemistry and for the technological applications of ultracold molecules from precision measurement to quantum computing.”

The research addressed open questions about whether chemical reactions occur at a billionth of a degree above absolute zero and whether the outcome can be controlled. Scientists worldwide are addressing these questions experimentally by cooling and trapping atoms and molecules at temperatures close to absolute zero and allowing them to interact chemically. This field of chemistry, widely referred to as ultracold chemistry, has become a hotbed for controlled chemistry experiments and quantum control of chemical reactions, the holy grail of chemistry.

In a pioneering experiment in 2010, groups at Colorado’s JILA (formerly known as the Joint Institute for Laboratory Astrophysics) were able to produce an ultracold gas of KRb molecules at nano-Kelvin temperatures. By merely flipping the nuclear spin of a KRb molecule they demonstrated that the ultracold reaction between these molecules could be turned on or off — a perfect illustration of controlled on-demand chemistry.

A fascinating finding of their study, Kendrick notes, is that while the overall reactivity is governed by the long-range forces, the rotational populations of the product K2 molecule are governed by chaotic dynamics at short-range. “The chaotic dynamics appears to be a general property of all ultracold reactions involving heavy alkali molecules,” said Kendrick, “so the rotational populations of all such reactions will exhibit the same Poisson distribution.”

This new, fundamental understanding of ultracold reactions will guide related technological applications in quantum control/computing, precision measurement and sensing important to the Los Alamos missions in information science and technology and global security.