Researchers at the National Institute of Standards and Technology (NIST) have conducted simulations suggesting that graphene, in addition to its many other useful features, can be modified with special pores to act as a tunable filter or strainer for ions (charged atoms) in a liquid.

The concept, which may also work with other membrane materials, could have applications such as nanoscale mechanical sensors, drug delivery, water purification, and sieves or pumps for ion mixtures similar to biological ion channels, which are critical to the function of living cells.

The research is described in the November 26 issue of Nature Materials.

“Imagine something like a fine-mesh kitchen strainer with sugar flowing through it,” project leader Alex Smolyanitsky says. “You stretch that strainer in such a way that every hole in the mesh becomes 1 to 2 percent larger. You’d expect that the flow through that mesh will be increased by roughly the same amount. Well, here it actually increases 1,000 percent. I think that’s pretty cool, with tons of applications.”

If it can be achieved experimentally, this graphene sieve would be the first artificial ion channel offering an exponential increase in ion flow when stretched, offering possibilities for fast ion separations or pumps or precise salinity control. Collaborators plan laboratory studies of these systems, Smolyanitsky says.

Graphene is a layer of carbon atoms arranged in hexagons, similar in shape to chicken wire, that conducts electricity. The NIST molecular dynamics simulations focused on a graphene sheet 5.5 by 6.4 nanometers (nm) in size and featuring small holes lined with oxygen atoms. These pores are crown ethers — electrically neutral circular molecules known to trap metal ions. A previous NIST simulation study showed this type of graphene membrane might be used for nanofluidic computing.

In the simulations, the graphene was suspended in water containing potassium chloride, a salt that splits into potassium and chlorine ions. The crown ether pores can trap potassium ions, which have a positive charge. The trapping and release rates can be controlled electrically. An electric field of various strengths was applied to drive the ion current flowing through the membrane.

Researchers then simulated tugging on the membrane with various degrees of force to stretch and dilate the pores, greatly increasing the flow of potassium ions through the membrane. Stretching in all directions had the biggest effect, but even tugging in just one direction had a partial effect. 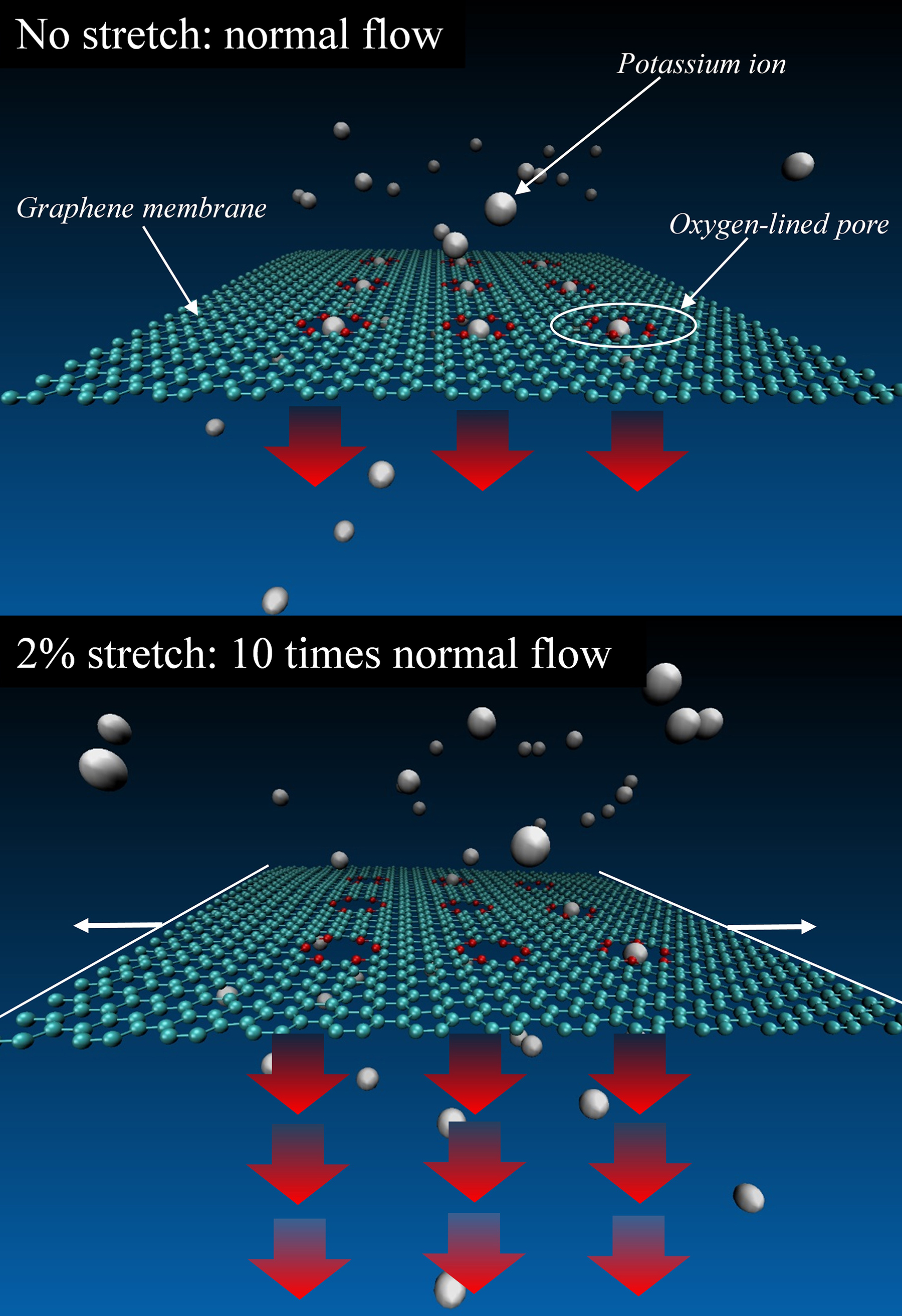 NIST researchers carried out simulations of a graphene membrane featuring oxygen-lined pores and immersed in a liquid solution of potassium ions (charged atoms), which under certain conditions can be trapped in the pores. Slight stretching of the graphene greatly increases the flow of ions through the pores. Image: NIST

Researchers found that the unexpectedly large increase in ion flow was due to a subtle interplay of a number of factors, including the thinness of graphene; interactions between ions and the surrounding liquid; and the ion-pore interactions, which weaken when pores are slightly stretched. There is a very sensitive balance between ions and their surroundings, Smolyanitsky says.

The research was funded by the Materials Genome Initiative.