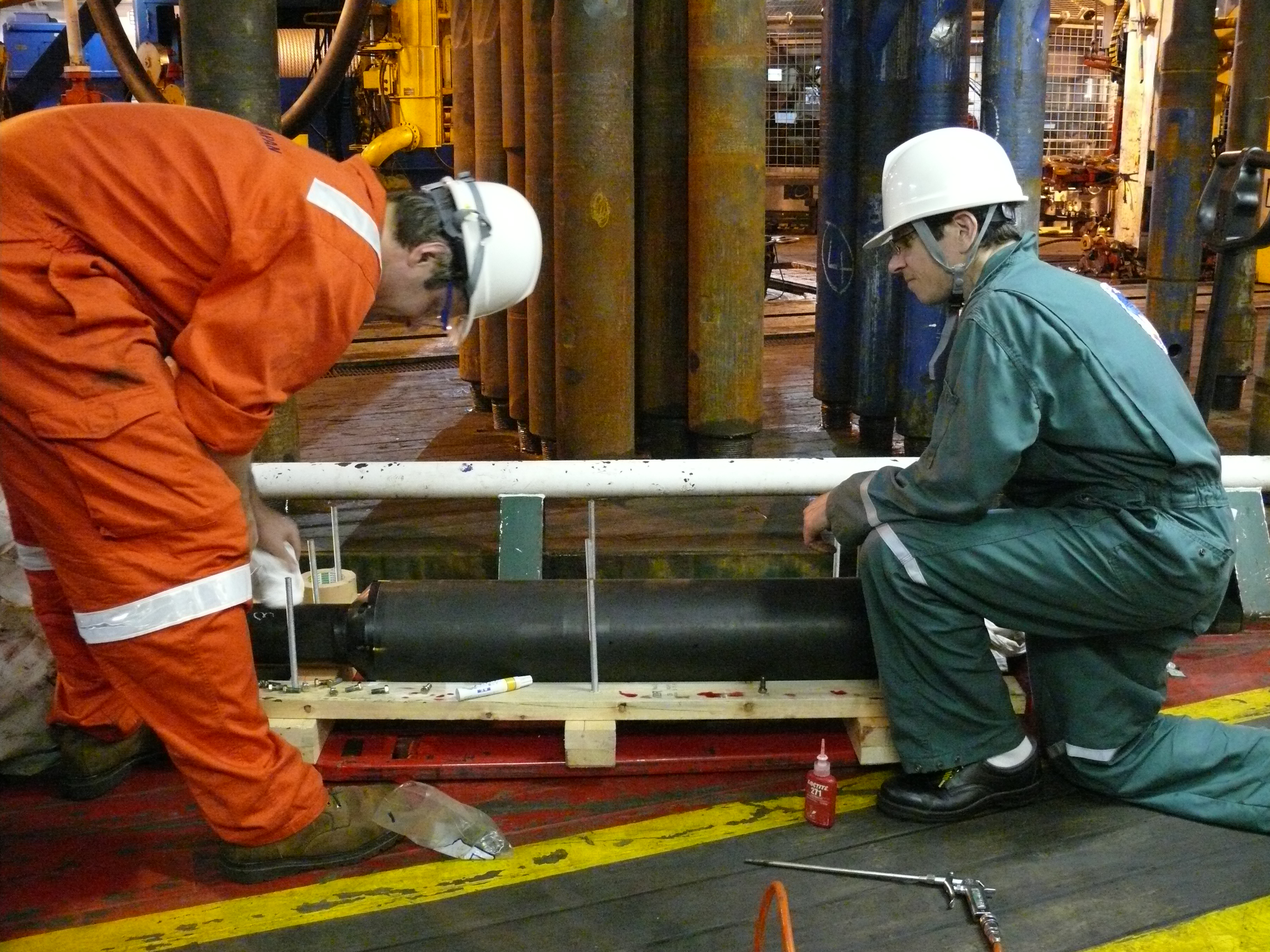 Assembly of pressure sensors to be installed 8,202 feet beneath the ocean surface. Source: NSF

Understanding “slow-slip” earthquakes on the seafloor — seismic events that occur over a period of days or weeks — is giving researchers new insights into undersea earthquakes and the subsequent creation of tsunamis. Through an ocean discovery program supported by the National Science Foundation (NSF), scientists are studying the seafloor off the coast of Japan. The region could provide vital clues.

Two tectonic plates, the Pacific Plate and the Eurasian Plate, meet there. In this ocean trench zone, the Pacific plate slides beneath the Eurasian plate. Such subduction zones are often associated with large earthquakes.

“This area is the shallowest part of the plate boundary system,” said Demian Saffer, a geoscientist at Penn State University. “If this region near the ocean trench slips in an earthquake, it has the potential to generate a large tsunami.”

Saffer and Eiichiro Araki, senior research scientist at the Japan Agency for Marine-Earth Science and Technology, published the results of their investigations of the plate boundary in this week’s issue of the journal Science.

The results are important for understanding tsunami risk, according to James Allan, program director in NSF’s Division of Ocean Sciences.

“Such tidal waves can affect the lives of hundreds of thousands of people and result in billions of dollars in damages, as happened in Southeast Asia in 2004,” Allan said. “This research underscores the importance of scientific drillship-based studies, and of collecting oceanographic and geologic data over long periods of time.”

The plate boundary earthquake zone off Japan’s coast forms part of the “ring of fire” that surrounds the Pacific Ocean. Once the end of a plate sliding — or subducting — beneath another reaches a certain depth, the material from the descending plate melts, forming volcanoes that often are located on land. Mount St. Helens in the U.S. is one of these volcanoes, as is Mount Fuji in Japan.

In 2009 and 2010, scientists with the IODP (Integrated Ocean Drilling Program, now the International Ocean Discovery Program) NanTroSEIZE (Nankai Trough Seismogenic Zone Experiment) project drilled two boreholes in the Nankai Trough southwest of Honshu, Japan. The holes were drilled from aboard a scientific drillship. In 2010, also from a scientific drillship, researchers installed monitoring instruments in the holes as part of a network that includes sensors on the seafloor. NSF supports the IODP.

The two boreholes are 6.6 miles apart, straddling the boundary of the last major earthquake in this area, which occurred in 1944 and measured magnitude 8.1. The resulting tsunami, which hit Tokyo, was 26 feet high.

Research shows that slow earthquakes are an important part of fault slip and earthquake occurrence at tectonic plate boundaries. They may explain where some of the energy built up in a fault or a subduction zone goes.

The remaining 50 percent, Saffer said, could be taken up in a permanent shortening of one of the plates or be stored for the next 100- or 150-year earthquake.

“We still don’t know which is the case, but it makes a big difference for tsunami hazards,” Saffer said. “The slow slip could reduce tsunami risk by periodically relieving stress, but it is probably more complicated than just acting as a shock absorber.”

The researchers discovered a series of slow slip events where the tectonic plates meet, seaward of an area of recurring magnitude 8 earthquakes. Some of these were triggered by unconnected earthquakes, and some happened spontaneously.

These earthquakes usually go unnoticed because they are so slow and far offshore.

The researchers also note that because earthquakes that occur at a distance from this subduction zone can trigger slow earthquakes, the area is much more sensitive than previously thought.

“The question now is whether it releases stress when these slow earthquakes occur,” Saffer said. “Some caution is required in simply concluding that the slow events reduce hazard, because our results also show that the outer part of the subduction area can store strain. Furthermore, are the slow earthquakes doing anything to load deeper parts of the area that do cause big earthquakes? We don’t know.”