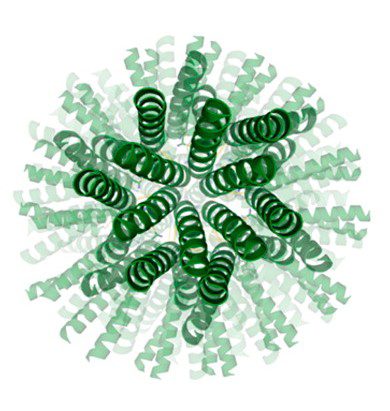 Gene therapy is a kind of experimental treatment that is designed to fix faulty genetic material and help a patient fight off or recover from a disease. Now scientists have engineered the smallest-reported virus-like shell that can self-assemble. It could someday carry potentially therapeutic DNA or RNA and transfer it to human cells. The report appears in the Journal of the American Chemical Society.

The story of gene therapy is fraught with much hype and high-profile failures. But, hype and failures aside, it remains a promising route to treat a range of ailments, from rare genetic diseases to common conditions such as diabetes. Clinical trials to test various gene therapy treatments are underway. One possible approach is to copy the way viruses behave. When they infect people, viruses inject their genetic material into human cells. Artificial viruses have been engineered to mimic this step, but they tend to clump or are not uniform in size, which can hinder their effectiveness. Max Ryadnov and colleagues wanted to address these issues.

Rather than using full proteins, the researchers used short peptide sequences designed to assemble into tiny gene carriers, which are smaller than previously reported synthetic viruses and even naturally occurring viruses. Lab testing showed that their artificial viral shells were uniform in size and didn’t clump. The particles could encase DNA or RNA and transfer the genetic material to human cells without harm. Depending on the introduced material, the recipient cells then either expressed a new protein or stopped expressing their own protein.