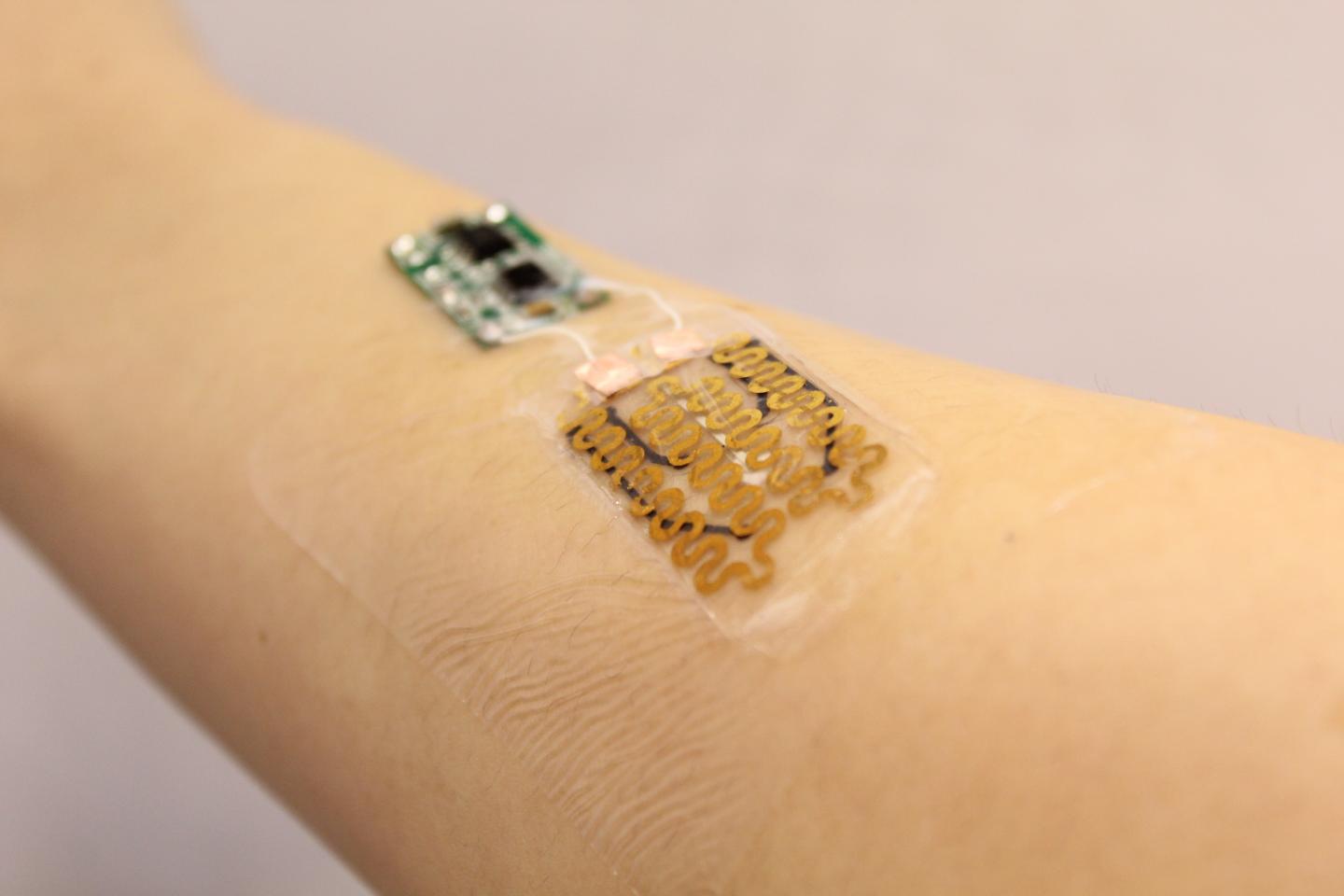 A smart bandage placed on an arm. Temperature and pH sensors in the bandage (right) are read by a microprocessor (left), which may trigger release of drug from the bandage by sending a current through heating elements. Credit: Tufts University

Researchers are working on a “smart” bandage that will actively monitor the condition of chronic wounds and deliver drug treatments to improve healing.

The new prototype bioelectronics bandage, created by researchers at Tufts University, features integrated pH and temperatures sensors that electronically trigger drug release when it senses that wounds are not healing properly.

Sameer Sonkusale, PhD, a professor of electrical and computer engineering at Tufts University’s School of Engineering and corresponding co-author for the study, said in an interview with R&D Magazine that making sure the bandage was flexible was a key goal when creating the prototype.

“Maintaining flexibility and biocompatibility after you add all the sensors is quite a challenge,” Sonkusale said. “Our fabrication approach assures the devices are thin flexible and conformal for any wound.

“Bioelectronics is an intersection between electronic engineering and life sciences,” he added. “The area of precision diagnostics and precision medicine will be revolutionized by innovations at this intersection.”

Chronic skin wounds from burns, diabetes, and other medical conditions can overwhelm the regenerative capabilities of the skin, leading to persistent infections and amputations.

The new bandage will boost the natural healing process by using heating elements and thermoresponsive drug carriers to deliver tailored treatments in response to the embedded pH and temperature sensors that can track infection and inflammation.

According to the researchers, the pH of a chronic wound is a crucial parameter to monitor the healing process. Wounds that are healing normally come with a pH between 5.5 and 6.5, while wounds that are not normally healing feature a pH above 6.5.

The researchers also found that temperature is a crucial parameter for healing, as it indications the level of inflammation in and around the wound. Inflammation could also be tracked using specific biomarkers.

The team has also created flexible sensors for oxygenation that can be integrated into the bandage.

The new technology is used in conjunction with a microprocessor that reads the data from the sensors and releases the particular drug on demand from its carriers by heating a gel. The entire device is attached to a transparent medical tape to form a flexible bandage that is less than three millimeters thick.

According to research published in Value in Health, approximately 15 percent of Medicare beneficiaries require treatment for at least one type of chronic wound or infection.  This comes with a price tag of about $28 billion annually.

Patients are often older, non-ambulatory, and limited in their ability to provide self-care. However, non-healing wounds are typically treated in an outpatient setting or at home.

The Tufts smart bandage gives a real-time monitoring option with treatment delivered with limited intervention from the patient or caregivers.

The researchers have already tested the bandage successfully under in vivo conditions and are currently conducting pre-clinical studies to determine the in vivo clinical advantages in facilitating healing compared to traditional bandages and wound care products.

“We are looking forward to rigorous pre-clinical and clinical trials,” Sonkusale said.