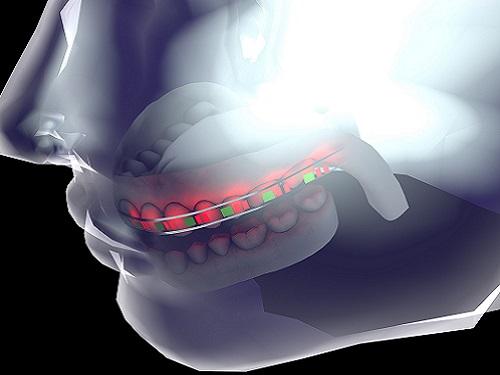 Flexible lithium batteries have been incorporated into dental braces as part of efforts to increase the efficiency of corrective orthodontics. Source: © 2017 KAUST

Researchers from the King Abdullah University of Science & Technology (KAUST) developed an orthodontic system that involves placing two near-infrared light-emitting diodes (LEDs) with one lithium-ion battery on every tooth in a semitransparent, 3D-printed dental brace.

The batteries provide enough energy to switch the LEDs on and off to deliver localized light therapy in accordance to the needs of each tooth. The LEDs can be programmed by the dentist and the brace would be removable to allow the batteries to be recharged.

The researchers redesigned the batteries and then encapsulated them in biocompatible soft polymeric materials to prevent the possibility of leakage, while making them safe to place in the mouth.

As a testament to their biocompatibility, when human embryonic kidney cells were cultured on these batteries over a period of days, they thrived and proliferated. The batteries’ electrochemical performance increased linearly with rising temperature, up to 90 degrees Celsius, making them stable.

“We started embedding flexible LEDs inside 3D-printed braces but they needed a reliable power supply,” Muhammad Hussain Ph.D., a professor of Electrical Engineering at KAUST, said in a statement. “After the incidents with the Samsung Galaxy 7 batteries exploding, we realized that traditional batteries in their current form and encapsulation don’t serve our purpose.

“So we redesigned the state-of-the-art lithium-ion battery technology into a flexible battery, followed by biosafe encapsulation within the braces to make a smart dental brace,” he added.

The researchers now plan on conducting clinical trials to test the new product.

The study was published in NPJ Flexible Electronics.