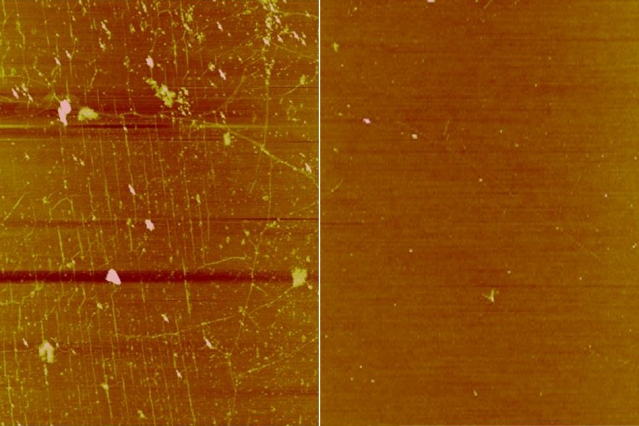 The image on the right shows a graphene sheet coated with wax during the substrate-transfer step. This method drastically reduced wrinkles on the graphene’s surface compared to a traditional polymer coating (left). Image: Courtesy of the researchers

To protect graphene from performance-impairing wrinkles and contaminants that mar its surface during device fabrication, MIT researchers have turned to an everyday material: wax.

Graphene is an atom-thin material that holds promise for making next-generation electronics. Researchers are exploring possibilities for using the exotic material in circuits for flexible electronics and quantum computers, and in a variety of other devices.

But removing the fragile material from the substrate it’s grown on and transferring it to a new substrate is particularly challenging. Traditional methods encase the graphene in a polymer that protects against breakage but also introduces defects and particles onto graphene’s surface. These interrupt electrical flow and stifle performance.

In a paper published in Nature Communications, the researchers describe a fabrication technique that applies a wax coating to a graphene sheet and heats it up. Heat causes the wax to expand, which smooths out the graphene to reduce wrinkles. Moreover, the coating can be washed away without leaving behind much residue.

In experiments, the researchers’ wax-coated graphene performed four times better than graphene made with a traditional polymer-protecting layer. Performance, in this case, is measured in “electron mobility”—meaning how fast electrons move across a material’s surface—which is hindered by surface defects.

“Like waxing a floor, you can do the same type of coating on top of large-area graphene and use it as layer to pick up the graphene from a metal growth substrate and transfer it to any desired substrate,” says first author Wei Sun Leong, a postdoc in the Department of Electrical Engineering and Computer Science (EECS). “This technology is very useful, because it solves two problems simultaneously: the wrinkles and polymer residues.”

Co-first author Haozhe Wang, a PhD student in EECS, says using wax may sound like a natural solution, but it involved some thinking outside the box—or, more specifically, outside the laboratory: “As students, we restrict ourselves to sophisticated materials available in lab. Instead, in this work, we chose a material that commonly used in our daily life.”

To grow graphene over large areas, the 2-D material is typically grown on a commercial copper substrate. Then, it’s protected by a “sacrificial” polymer layer, typically polymethyl methacrylate (PMMA). The PMMA-coated graphene is placed in a vat of acidic solution until the copper is completely gone. The remaining PMMA-graphene is rinsed with water, then dried, and the PMMA layer is ultimately removed.

Wrinkles occur when water gets trapped between the graphene and the destination substrate, which PMMA doesn’t prevent. Moreover, PMMA comprises complex chains of oxygen, carbon, and hydrogen atoms that form strong bonds with graphene atoms. This leaves behind particles on the surface when it’s removed.

Researchers have tried modifying PMMA and other polymers to help reduce wrinkles and residue, but with minimal success. The MIT researchers instead searched for completely new materials—even once trying out commercial shrink wrap. “It was not that successful, but we did try,” Wang says, laughing.

After combing through materials science literature, the researchers landed on paraffin, the common whitish, translucent wax used for candles, polishes, and waterproof coatings, among other applications.

In simulations before testing, Buehler’s group, which studies the properties of materials, found no known reactions between paraffin and graphene. That’s due to paraffin’s very simple chemical structure.

“Wax was so perfect for this sacrificial layer. It’s just simple carbon and hydrogen chains with low reactivity, compared to PMMA’s complex chemical structure that bonds to graphene,” Leong says.

In their technique, the researchers first melted small pieces of the paraffin in an oven. Then, using a spin coater, a microfabrication machine that uses centrifugal force to uniformly spread material across a substrate, they dropped the paraffin solution onto a sheet of graphene grown on copper foil. This spread the paraffin into a protective layer, about 20 microns thick, across the graphene.

The researchers transferred the paraffin-coated graphene into a solution that removes the copper foil. The coated graphene was then relocated to a traditional water vat, which was heated to about 40 degrees Celsius. They used a silicon destination substrate to scoop up the graphene from underneath and baked in an oven set to the same temperature.

Because paraffin has a high thermal expansion coefficient, it expands quite a lot when heated. Under this heat increase, the paraffin expands and stretches the attached graphene underneath, effectively reducing wrinkles. Finally, the researchers used a different solution to wash away the paraffin, leaving a monolayer of graphene on the destination substrate.

Because wax coating is already common in many manufacturing applications—such as applying a waterproof coating to a material—the researchers think their method could be readily adapted to real-world fabrication processes. Notably, the increase in temperature to melt the wax shouldn’t affect fabrication costs or efficiency, and the heating source could in the future be replaced with a light, the researchers say.

Next, the researchers aim to further minimize the wrinkles and contaminants left on the graphene and scaling up the system to larger sheets of graphene. They’re also working on applying the transfer technique to the fabrication processes of other 2-D materials.

“We will continue to grow the perfect large-area 2-D materials, so they come naturally without wrinkles,” Leong says.