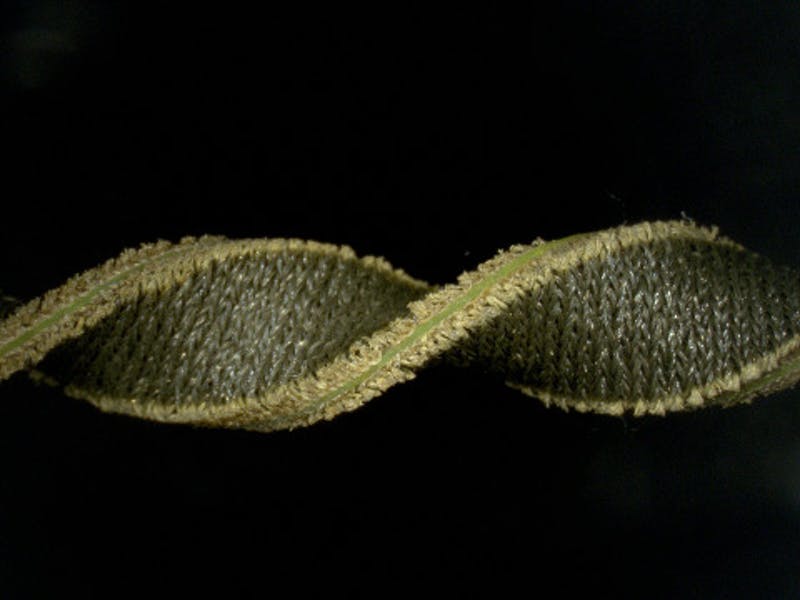 Wearable technologies – from heart rate monitors to virtual reality headsets – are exploding in popularity in both the consumer and research spaces, but most of the electronic sensors that detect and transmit data from wearables are made of hard, inflexible materials that can restrict both the wearer’s natural movements and the accuracy of the data collected. Now, a team of researchers at the Wyss Institute for Biologically Inspired Engineering and the Harvard John A. Paulson School of Engineering and Applied Sciences (SEAS) has created a highly sensitive soft capacitive sensor made of silicone and fabric that moves and flexes with the human body to unobtrusively and accurately detect movement.

“We’re really excited about this sensor because, by leveraging textiles in its construction, it is inherently suitable for integration with fabric to make ‘smart’ robotic apparel,” says corresponding author Conor Walsh, Ph.D., Core Faculty member at the Wyss Institute and the John L. Loeb Associate Professor of Engineering and Applied Sciences at SEAS. “Additionally, we have designed a unique batch-manufacturing process that allows us to create custom-shaped sensors that share uniform properties, making it possible to quickly fabricate them for a given application,” says co-author Ozgur Atalay, Ph.D., Postdoctoral Fellow at the Wyss Institute. This research is published in the current issue of Advanced Materials Technologies, and the protocol is available as part of the Harvard Biodesign Lab’s Soft Robotics Toolkit.

The Wyss team’s technology consists of a thin sheet of silicone (a poorly conductive material) sandwiched between two layers of silver-plated, conductive fabric (a highly conductive material), forming a capacitive sensor. This type of sensor registers movement by measuring the change in capacitance, or the ability to hold electrical charge, of the electrical field between the two electrodes. “When we apply strain by pulling on the sensor from the ends, the silicone layer gets thinner and the conductive fabric layers get closer together, which changes the capacitance of the sensor in a way that’s proportional to the amount of strain applied, so we can measure how much the sensor is changing shape,” explains co-author Daniel Vogt, Research Engineer at the Wyss Institute.

The hybrid sensor’s superior performance stems from its novel manufacturing process, in which the fabric is attached to both sides of the silicone core with an additional layer of liquid silicone that is subsequently cured. This method allows the silicone to fill some of the air gaps in the fabric, mechanically locking it to the silicone and increasing the surface area available for distributing strain and storing electrical charge. This silicone-textile hybrid improves sensitivity to movement by capitalizing on the qualities of both materials: the strong, interlocking fabric fibers help limit how much the silicone deforms while stretching, and the silicone helps the fabric return to its original shape after strain is removed. Finally, thin, flexible wires are permanently attached to the conductive fabric with thermal seam tape, allowing electrical information from the sensor to be transmitted to a circuit without a hard, bulky interface.

The team evaluated their new sensor design by performing strain experiments in which various measurements are taken as the sensor is stretched by an electromechanical tester. Generally, as an elastic material is pulled, its length increases while its thickness and width decrease, so the total area of the material – and, therefore, its capacitance – stays constant. Surprisingly, the researchers found that the conductive area of their sensor increased as it was stretched, resulting in greater-than-expected capacitance. “Silicone-based capacitive sensors have limited sensitivity based on the nature of material. Embedding the silicone in conductive fabric, however, created a matrix that prevented the silicone from shrinking as much width-wise, which improved sensitivity above that of the bare silicone we tested,” says lead author Asli Atalay, Postdoctoral Fellow at the Wyss Institute.

The hybrid sensor detected increases in capacitance within 30 milliseconds of strain application and physical changes of less than half a millimeter, confirming that it is capable of capturing movement on the scale of the human body. To test that ability in a real-world scenario, the team integrated a set of them into a glove to measure fine-motor hand and finger movements in real time. The sensors were successfully able to detect capacitance changes on individual fingers as they moved, indicating their relative positions over time. “Our sensor’s greater sensitivity means it has the ability to distinguish smaller movements, like slightly moving one finger side-to-side rather than simply whether the whole hand is open or clenched in a fist,” explains co-author Vanessa Sanchez, a Graduate Student in the Biodesign Lab at SEAS.

While this study is a preliminary proof-of-concept, the team is excited about the many future directions in which this technology could develop. “This work represents our growing interest in leveraging textile technology in robotic systems, and we see promising applications for motion capture ‘in the wild,’ such as athletic clothing that tracks physical performance or soft clinical devices to monitor patients in their homes. In addition, when combined with fabric-based soft actuators, these sensors will enable new robotic systems that truly mimic apparel,” says Walsh.

“This technology opens up entirely new approaches to wearable diagnostics and coupled therapeutics that undoubtedly will pay a central role in the future of home healthcare.  It also reflects the power inherent in our focus on collaboration here at the Wyss Institute, as it draws insight and inspiration from both Conor Walsh’s Biodesign Lab and Rob Wood’s Microrobotics Lab, which are central to our Bioinspired Robotics platform,” says Wyss Founding Director Donald Ingber, M.D., Ph.D., who is also the Judah Folkman Professor of Vascular Biology at Harvard Medical School and the Vascular Biology Program at Boston Children’s Hospital, and Professor of Bioengineering at SEAS.

This research was supported by the National Science Foundation’s under Grant No. CBET-1454472, the Scientific and Technological Research Council of Turkey (TÜBİTAK) BIDEB-2219 Postdoctoral Research program, DARPA, and the Warrior Web Program under Award No. W911NF-14-C-0051. Opinions, interpretations, conclusions and recommendations are those of the authors and are not necessarily endorsed by the U.S. Army.