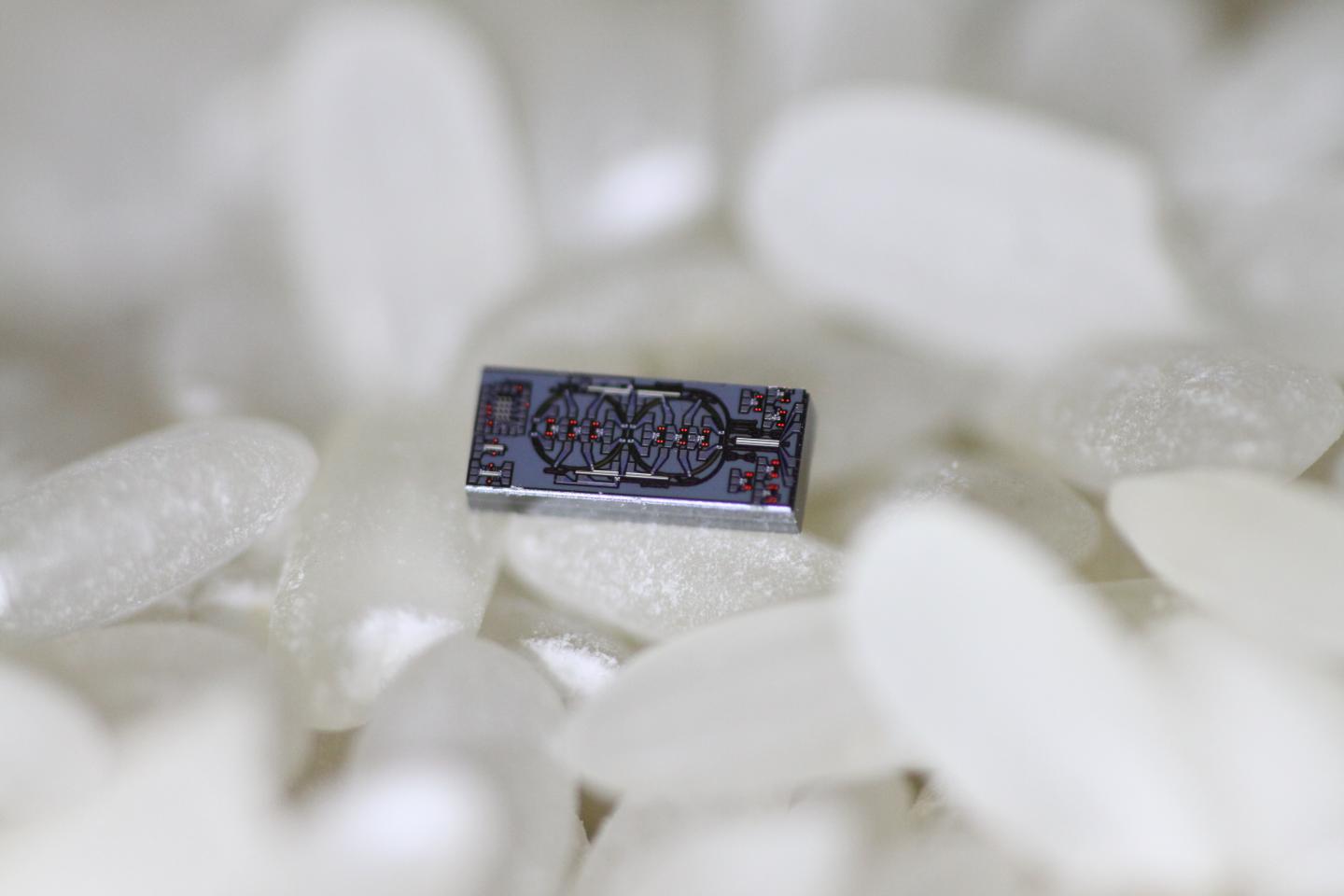 This is the optical gyroscope developed in Ali Hajimiri’s lab, resting on grains of rice. Credit: Ali Hajimiri/Caltech

Gyroscopes are devices that help vehicles, drones, and wearable and handheld electronic devices know their orientation in three-dimensional space. They are commonplace in just about every bit of technology we rely on every day. Originally, gyroscopes were sets of nested wheels, each spinning on a different axis. But open up a cell phone today, and you will find a microelectromechanical sensor (MEMS), the modern-day equivalent, which measures changes in the forces acting on two identical masses that are oscillating and moving in opposite directions. These MEMS gyroscopes are limited in their sensitivity, so optical gyroscopes have been developed to perform the same function but with no moving parts and a greater degree of accuracy using a phenomenon called the Sagnac effect.

What is the Sagnac Effect?

The Sagnac effect, named after French physicist Georges Sagnac, is an optical phenomenon rooted in Einstein’s theory of general relativity. To create it, a beam of light is split into two, and the twin beams travel in opposite directions along a circular pathway, then meet at the same light detector. Light travels at a constant speed, so rotating the device–and with it the pathway that the light travels–causes one of the two beams to arrive at the detector before the other. With a loop on each axis of orientation, this phase shift, known as the Sagnac effect, can be used to calculate orientation.

The smallest high-performance optical gyroscopes available today are bigger than a golf ball and are not suitable for many portable applications. As optical gyroscopes are built smaller and smaller, so too is the signal that captures the Sagnac effect, which makes it more and more difficult for the gyroscope to detect movement. Up to now, this has prevented the miniaturization of optical gyroscopes.

The new gyroscope from Hajimiri’s lab achieves this improved performance by using a new technique called “reciprocal sensitivity enhancement.” In this case, “reciprocal” means that it affects both beams of the light inside the gyroscope in the same way. Since the Sagnac effect relies on detecting a difference between the two beams as they travel in opposite directions, it is considered nonreciprocal. Inside the gyroscope, light travels through miniaturized optical waveguides (small conduits that carry light, that perform the same function as wires do for electricity). Imperfections in the optical path that might affect the beams (for example, thermal fluctuations or light scattering) and any outside interference will affect both beams similarly.

Hajimiri’s team found a way to weed out this reciprocal noise while leaving signals from the Sagnac effect intact. Reciprocal sensitivity enhancement thus improves the signal-to-noise ratio in the system and enables the integration of the optical gyro onto a chip smaller than a grain of rice.