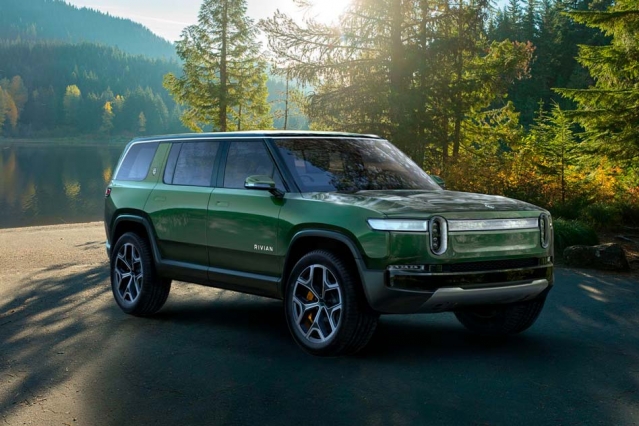 One of the two models unveiled at the Los Angeles Auto Show this week, Rivian’s R1S, will sell for $65,000, according to the company. Courtesy of Rivian

Electric vehicle startup Rivian Automotive has spent the first nine years of its existence in stealth mode working to design vehicles around what it believes are future trends in mobility, such as electrification, subscription-based ownership, and autonomy. This week the company is finally revealing what it’s been up to, dropping the curtains on its first two products, an all-electric pickup truck and SUV, at the Los Angeles Auto Show.

Rivian has garnered interest over the years for quietly securing some of the building blocks of mass production, including raising nearly $500 million in capital and purchasing a 2.6-million-square-foot manufacturing facility in Illinois that once produced 200,000 cars a year for Mitsubishi. Now Rivian says it will begin shipping its vehicles to customers in 2020.

The abrupt transition from stealth mode to large vehicle supplier is all part of the plan for Rivian founder and CEO R.J. Scaringe SM ’07 PhD ’09. Scaringe didn’t want to hype up the company until he could show something off that customers could actually drive in a reasonable amount of time.

“It would’ve been easy to make statements early on and show sketches,” Scaringe says. “But we wanted to get all the pieces aligned: To build out a robust team with robust processes, get capital in place, line up key suppliers, acquire a large-scale production facility, and align it with our products. All that is done now. It’s been blood, sweat, and tears for a period of years to get in a position where we’re very comfortable showing our products.”

Designing a vehicle from the ground up has taken time, but the process has allowed Rivian to create some novel vehicles with intriguing performance specifications. The company describes its first two products, named the R1T and R1S, as high-end adventure vehicles that can be driven on- or off-road.

“They’re designed to be comfortable to use and invite you to get dirty,” Scaringe says. “When I say truck or SUV, you’re thinking inefficient and not particularly sophisticated. But we’ve used technology to make the traditional weaknesses of these vehicles strengths.”

Users purchasing trucks or SUVs have traditionally had to make compromises in areas like acceleration, control, and gas mileage in return for more space and towing capacity. Rivian uses an innovative design and powertrain to change that.

Both the R1T and R1S will come with a hardware suite including cameras and sensors, which gives them self-driving capabilities on highways. The vehicles have a unique quad-motor setup that allows the electronic control unit to send 147 kilowatts of power to each wheel.

The fastest versions of the vehicles go from 0 to 60 miles per hour in three seconds and 0 to 100 miles per hour in less than seven seconds. Scaringe says the products’ ride and handling feel more like a sports sedan than a truck or SUV. He also says the vehicles can “go off-road better than any vehicle on the planet today” thanks to high ground clearance and wheel articulation that’s helped by a suspension system that adjusts to the environment, stiffening on the road and immediately loosening off the road.

Rivian’s battery configuration has been referred to as “skateboard architecture” because the battery pack stretches across the floor of the vehicle. The packs come in different sizes, the largest of which gives the vehicles over 400 miles in range. Rivian assembles its own battery packs, using proprietary cooling systems to achieve energy efficiency that Scaringe claims is better than anything on the EV market today.

“We’re doing all of the electronics, control systems, and battery packaging in-house,” Scaringe says. “And the digital architecture of the vehicle is a complete clean-sheet approach. So we’ve done the hardware design, the software design, the full stack development. It gives us complete control over how we move data around the vehicle and synchronize it with our cloud platform. We have a real-time sense of the health of all of our assets in the field.”

The high-tech platform comes inside two spacious vehicles that are designed to be stylish and functional. Both models include a 330-liter front trunk and a long compartment under the rear seats that Scaringe says is perfect for objects like surfboards, skis, and golf bags.

Rivian is listing the R1S at $65,000 and the R1T at $61,500 after federal tax rebates. The company is planning to release lower-priced cars in the future.

MIT past helps change the future

Scaringe studied mechanical engineering  for his master’s and PhD in the Sloan Automotive Laboratory, where he was a member of the automotive research team. He worked with some of the biggest car companies in the world in that role, and realized how difficult it would be for them to reorient around the big changes in transportation that he believed were coming.

Immediately after earning his PhD in 2009, in a year when General Motors and Chrysler would declare for bankruptcy, Scaringe founded Rivian. At a time when many people were wondering if America’s biggest car companies would make it another day, Scaringe set out to start a company that would lead the market decades into the future.

“In 2020, we’d love to have you use one of our vehicles. But in 2035, when you’re thinking about those trips to the beach or hiking, we want you to immediately think about using a Rivian,” Scaringe says. “The brand position we set up in 2020 lays the foundation for us.”

Scaringe knew fulfilling his vision would be difficult, but he believes his time at MIT helped him persevere in the face of the major challenges that come with starting something as complex and capital-intensive as a automotive company.

“MIT draws together some of the smartest minds in the world to study and work on deeply challenging problems,” Scaringe says. “That environment helps demonstrate that even the most challenging problems can be solved through the application of time and effort. … The foundation around solving complex and difficult problems is precisely what has enabled Rivian to this point.”

Now that Rivian’s first vehicles have been revealed, Scaringe hopes the company can move beyond thinking about these trends and start accelerating their arrival.

“It comes back to these big fundamental shifts in how we think of mobility,” Scaringe says. “The change in how we power our vehicles; how the vehicles are controlled and operated, going from human operation to machine operation; and because of those changes, the significant changes to how we think about the business model. Like how consumers purchase vehicles and how manufacturers make money, shifting away from the traditional asset sale model. We think it’s really important to line up the megatrends with our business strategy, and now it’s about making sure the strategy helps drive those megatrends.”