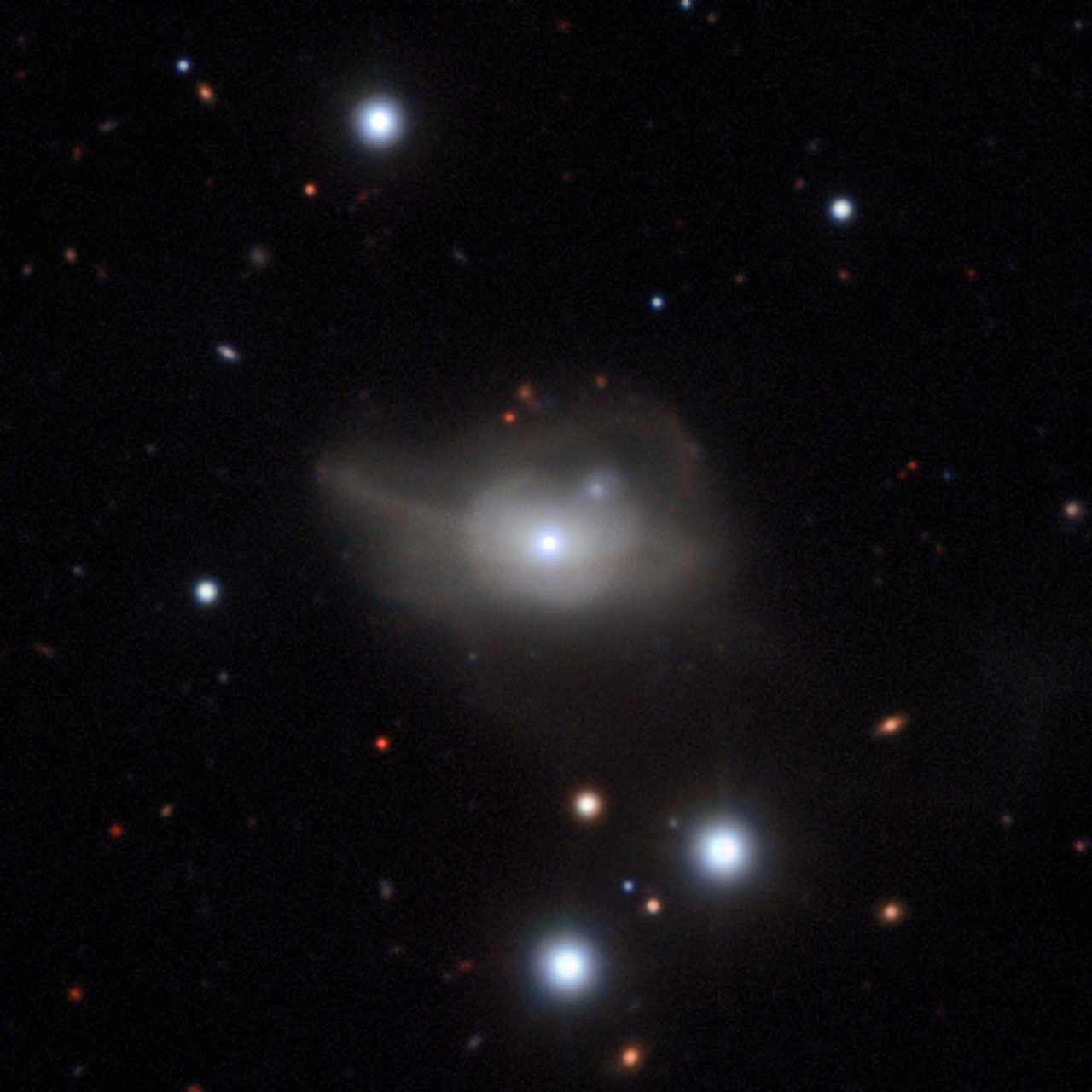 This image from the MUSE instrument on ESO’s Very Large Telescope shows the active galaxy Markarian 1018, which has a supermassive black hole at its core. The faint loops of light around the galaxy are a result of its interaction and merger with another galaxy in the recent past. Credit: ESO/CARS survey.

The mystery of a rare change in the behaviour of a supermassive black hole at the centre of a distant galaxy has been solved by an international team of astronomers using ESO’s Very Large Telescope along with the NASA/ESA Hubble Space Telescope and NASA’s Chandra X-ray Observatory. It seems that the black hole has fallen on hard times and is no longer being fed enough fuel to make its surroundings shine.

Many galaxies are found to have an extremely bright core powered by a supermassive black hole. These cores make “active galaxies” some of the brightest objects in the Universe. They are thought to shine so brightly because hot material is glowing fiercely as it falls into the black hole, a process known as accretion. This brilliant light can vary hugely between different active galaxies, so astronomers classify them into several types based on the properties of the light they emit.

Some of these galaxies have been observed to change dramatically over the course of only 10 years; a blink of an eye in astronomical terms. However, the active galaxy in this new study, Markarian 1018 stands out by having changed type a second time, reverting back to its initial classification within the last five years. A handful of galaxies have been observed to make this full-cycle change, but never before has one been studied in such detail.

The discovery of Markarian 1018’s fickle nature was a chance by-product of the Close AGN Reference Survey (CARS), a collaborative project between ESO and other organisations to gather information on 40 nearby galaxies with active cores. Routine observations of Markarian 1018 with the Multi-Unit Spectroscopic Explorer (MUSE) installed on ESO’s Very Large Telescope revealed the surprising change in the light output of the galaxy.

“We were stunned to see such a rare and dramatic change in Markarian 1018”, said Rebecca McElroy, lead author of the discovery paper and a PhD student at the University of Sydney and the ARC Centre of Excellence for All Sky Astrophysics (CAASTRO).

The chance observation of the galaxy so soon after it began to fade was an unexpected opportunity to learn what makes these galaxies tick, as Bernd Husemann, CARS project leader and lead author of one of two papers associated with the discovery, explained: “We were lucky that we detected the event just 3-4 years after the decline started so we could begin monitoring campaigns to study details of the accretion physics of active galaxies that cannot be studied otherwise.”

The research team made the most of this opportunity, making it their first priority to pinpoint the process causing Markarian 1018’s brightness to change so wildly. This could have been caused by any one of a number of astrophysical events, but they could rule out the black hole pulling in and consuming a single star and cast doubt on the possibility of obscuration by intervening gas. But the true mechanism responsible for Markarian 1018’s surprising variation remained a mystery after the first round of observations.

However, the team were able to gather extra data after they were awarded observing time to use the NASA/ESA Hubble Space Telescope, and NASA’s Chandra X-ray Observatory. With the new data from this suite of instruments they were able to solve the mystery—the black hole was slowly fading because it was being starved of accretion material.

“It’s possible that this starvation is because the inflow of fuel is being disrupted”, said Rebecca McElroy. “An intriguing possibility is that this could be due to interactions with a second supermassive black hole”. Such a black hole binary system is a distinct possibility in Markarian 1018, as the galaxy is the product of a major merger of two galaxies—each of which likely contained a supermassive black hole in its centre.

Research continues into the mechanisms at work in active galaxies such as Markarian 1018 that change their appearance. “The team had to work fast to determine what was causing Markarian 1018’s return to the shadows,” comments Bernd Husemann. “Ongoing monitoring campaigns with ESO telescopes and other facilities will allow us to explore the exciting world of starving black holes and changing active galaxies in more detail.”