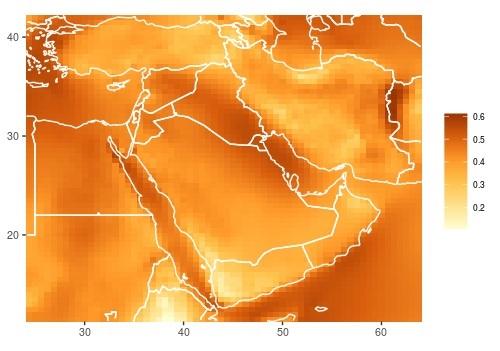 The notion of tethered wind turbines that generate electricity from abundant and reliable high-altitude winds seems futuristic. Now, KAUST research led by Georgiy Stenchikov has identified the most favorable areas for high-altitude wind-energy systems in the Middle East.

The results confirm that there is abundant wind energy up there that could feasibly be harnessed, bringing the possibility of high-altitude power generation a step closer.

“We are very enthusiastic about taking this work forward,” says Udaya Gunturu, who studies atmospheric processes at KAUST.

“Wind turbines on the Earth’s surface suffer from the very stubborn problem of intermittent wind supply,” says Gunturu. This has led researchers and energy companies worldwide to look upwards and explore the possibilities of the strong and reliable winds at high altitudes. Flying a wind turbine on a kite — with the electricity being delivered to the ground through its tether — may seem an unlikely scenario, but several companies worldwide are already testing prototype systems.

These developments attracted the attention of the Saudi Basic Industries Corporation (SABIC), which funded the KAUST research to explore the opportunities in the Middle East. The project made an excellent PhD topic for student Andrew Yip, first author of the research paper.

The researchers used information on wind strengths at different altitudes that was already available from the US space agency NASA. They processed this raw data to identify the most favorable areas for airborne wind-energy systems, and the optimal heights at which the turbines would need to fly. They also factored in daily and seasonal variations (see image).

“Optimal altitudes for the turbines vary by region and with time of year and time of day,” says Yip. “In general, the abundance of the airborne wind-energy resources increases with altitude.”

Tethered kites could potentially offer the flexibility to vary the altitude of the turbines as wind conditions change. Current technology would most likely allow harvesting wind energy at heights of two to three kilometers, but there is also a lot of wind even higher than that.

The researchers conclude that the most favorable regions for high-altitude wind energy in the Middle East are over parts of Saudi Arabia and Oman. Their next step will be to increase the resolution of their study.

“Our work may help Saudi Arabian wind-energy technology to leapfrog into the future and fulfill the Kingdom’s Vision 2030 plan on the development of renewable energy resources,” says Stenchikov.