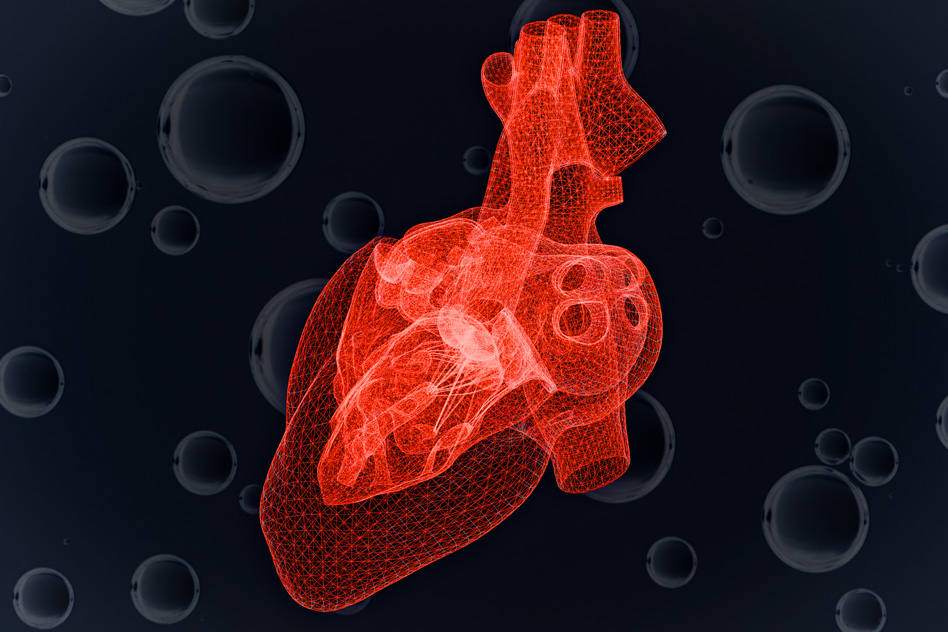 Time is of the essence when treating a patient undergoing a heart attack. Cardiac surgeons attempt to quickly stabilize the heart by applying reperfusion, a technique that restores oxygen to the heart by opening up blocked vessels with balloons and stents. While reperfusion can restore cardiac function, such sudden infusions of oxygen can also further injure severely depleted regions of the heart.

“It’s a double-edged sword,” says Anthony McDougal, a graduate student in MIT’s Department of Mechanical Engineering. “The rapid return of oxygen is necessary for the heart to survive, but it could also overwhelm the heart.”

Now McDougal has developed a model that predicts a single heart cell’s response to dwindling supplies of oxygen. Specifically, it evaluates a cell’s ability to keep producing ATP — a cell’s primary fuel source — and stay alive, even as it is increasingly deprived of oxygen.

The model is a first step in predicting whether reperfusion techniques will aid or further harm a depleted heart. It may also help to determine the optimal amount of oxygen to apply, given the degree of a heart’s deterioration.

“Part of the reason we’re interested in reperfusion is we’re not sure what is the timescale during which we can reintroduce the oxygen,” McDougal says. “If the tissue has been oxygen-deprived longer, you run into more risk of oxygen damaging the tissue. That becomes more of a problem as you try to address these issues, especially in rural locations that might have less access to hospitals.”

The results are published this month in the Journal of Biological Chemistry. McDougal’s co-author and advisor is C. Forbes Dewey, emeritus professor of mechanical engineering and biological engineering.

McDougal and Dewey sought to trace the metabolic, energy-producing conditions within a heart cell as it is progressively deprived of oxygen. While some scientists have explored this through various cellular models, most of those models have been limited to short timescales, around one to two minutes after healthy cells have been deprived of oxygen.

McDougal wanted instead to see how a heart cell changes over a much longer timescale, to understand how a patient’s heart may evolve from the time it becomes oxygen-deprived to the point at which a patient may receive reperfusion.

“We decided to see what is the state of the cell up to the moment of reperfusion. How is it faring, and what are the main pieces to consider when you begin to reperfuse it?” McDougal says.

The team focused on modeling the effect of declining oxygen supplies on the chemical reactions responsible for producing ATP in a heart cell.

McDougal identified 32 general molecular species involved in separate chain reactions to produce ATP. He then looked through the scientific literature to find enzymatic equations that describe how each individual reaction works, including its dependence on oxygen. He then compiled the equations for all 32 reactions into one model.

“There were a lot of cases where he had to estimate the reaction rates, because two different papers would have different results, based on different animal experiments or different conditions, and he had to work backward to try and normalize the results to see what biological relationships he could get out of them that were meaningful,” Dewey says.

Once he compiled all the equations into the model, McDougal ran more than 200 simulations, to see how a cell’s total ATP production changed as each ATP-producing reaction adapted to various levels of oxygen over various lengths of time.

Steady, steady, then a crash

Surprisingly, the model’s simulations show that heart cells can continue generating ATP, even with oxygen levels as low as 10 percent of the optimal concentration in healthy cells.

With healthy supplies of oxygen, ATP is produced via glycolysis, an aerobic process that requires oxygen to kick off a cascade of chemical reactions involving various molecular species, all ending in the healthy production of ATP. To release useful  energy, the cell uses an enzyme to snap off a phosphate molecule from the three-phosphate ATP structure, leaving ADP (adenosine diphosphate) and using the single phosphate to feed various cellular activities.

As oxygen supplies plummet to around 10 percent, these oxygen-dependent reactions produce less and less ATP. That’s when anaerobic “backup” processes come online. For example, the molecular species creatine phosphate combines with an enzyme to cleave its phosphate group, attaching it to ADP to form more ATP. When reserves of creatine phosphate run low, a cell’s glycogen steps in to fill its role, maintaining ATP levels.

“Glycogen is just a big hair ball of glucose, and at a certain point, with even more pressure on ATP, the cell can pull individual glucose molecules off that hair ball and turn it into energy,” McDougal says.

In short, the team found that, even though oxygen may be severely limited, cardiac cells appear to dig deep into their energy arsenals to maintain ATP levels and keep themselves alive.

However, eventually, as oxygen approaches zero, even backup reserves shut down, causing levels of ATP to crash — a point of no return for a fatigued cell. Interestingly, McDougal observed an intermediate stage, in which a heart cell’s ATP levels drop but have not yet crashed.

“These are your knife-edge cases, where any small perturbation to the cell could cause it to spiral and die, or come back and stay alive,” McDougal says.

It is therefore essential to know just the right amount of oxygen to introduce to ischemic portions of the heart that are in such precarious states. For instance, in some cases, rather than introducing a rush of oxygen directly to a depleted region, Dewey says scientists might consider introducing small amounts of oxygen to the newly opened vessel so that it could slowly diffuse into the injured areas, without shock or harm. “Some animal experiments suggest that this might be beneficial,” Dewey says. “We now have a model that can begin to evaluate many new treatment methods, seeking ones that have exceptional promise.”

“Hopefully with time, we can create a better map of exactly how much oxygen to give, at what time point,” McDougal adds.