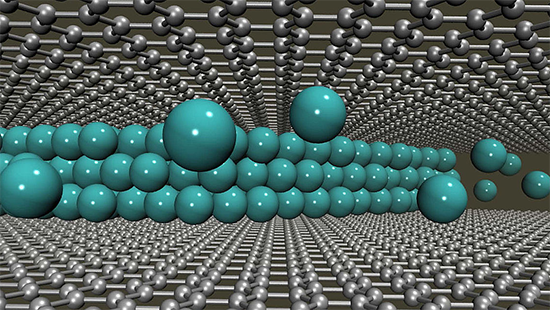 Whether it is high-temperature superconductors and improved energy storage to bendable metals and fabrics capable of completely wicking liquids, materials scientists study and understand the physics of interacting atoms in solids to ultimately find ways to improve materials we use in every aspect of daily life.

The frontier of materials science research lies not in alchemical trial and error, though; to better understand and improve materials today, researchers must be able to study material properties at the atomic scale and under extreme conditions. As a result, researchers have increasingly come to rely on simulations to complement or inform experiments into materials’ properties and behaviors.

A team of researchers led by Arkady Krasheninnikov, physicist at the Helmholtz-Zentrum Dresden-Rossendorf, partners with experimentalists to answer fundamental questions about materials’ properties, and the team recently had a big breakthrough—experimentalists were able to observe in real time lithium atoms’ behaviour when placed between two graphene sheets. A graphene sheet is what researchers consider a 2D material, as it is only one atom thick, which made it possible to observe lithium atom motion in a transmission electron microscopy (TEM) experiments.

With access to supercomputing resources through the Gauss Centre of Supercomputing (GCS), Krasheninnikov’s team was able to use the High-Performance Computing Center Stuttgart’s (HLRS’) Hazel Hen supercomputer to simulate, confirm, and expand on the team’s experimental findings. The collaborative work was recently published in Nature.

“2D materials exhibit useful and exciting properties, and can be used for many different applications, not only as a support in TEM,” Krasheninnikov says. “Essentially, 2D materials are at the cutting edge of materials research. There are likely about a couple thousands of these materials, and roughly 50 have actually been made.”

To better understand 2D materials experimentally, researchers routinely use TEM nowadays. The method allows researchers to suspend small, thin pieces of a material, then run a high-energy electron beam over it, ultimately creating a magnified image of the material that researchers can study, much like a movie projector takes images from a reel and projects them onto a larger screen. With this view into a material, experimentalists can better chart and estimate atoms’ positions and arrangements.

The high-energy beam can do more than just help researchers observe materials, though—it is also a tool to study 2D materials’ electronic properties. Moreover, researchers can use the high-energy electrons from TEM to knock out individual atoms from a material with high precision to see how the material’s behavior changes based on the structural change.

Recently, experimentalists from Max Planck Institute for Solid State Research, Stuttgart and the University of Ulm wanted to better understand how lithium particles interacted between two atom-thin graphene sheets. Better understanding lithium intercalation, or placing lithium between layers of another material (in this case, graphene), helps researchers develop new methods for designing better battery technologies. Experimentalists got data from TEM and asked Krasheninnikov and his collaborators to rationalize the experiment using simulation.

Simulations allow researchers to see a material’s atomic structure from a variety of different angles, and they also can help speed up the trial-and-error approach to designing new materials purely through experiment. “Simulations cannot do the full job, but they can really limit the number of possible variants, and show the direction which way to go,” Krasheninnikov says. “Simulations save money for people working in fundamental research and industry, and as a result, computer modelling is getting more and more popular.”

In this case, Krasheninnikov and his collaborators found that the experimentalists’ atomic coordinates, or the positions of particles in the material, would not be stable, meaning that the material would defy the laws of quantum mechanics. Using simulation data, Krasheninnikov and his collaborators suggested a different atomic structure, and when the team re-ran its experiment, it found a perfect match with the simulation.

The experimentalists were able to, for the first time, watch in real-time how lithium atoms behave when placed between two graphene sheets, and with the help of simulations, get insights into how the atoms were arranged. It was previously assumed that in such an arrangement, the lithium would be structured as a single atomic layer, but the simulation showed that lithium could form bi- or trilayers, at least in bi-layer graphene, leading researchers to look for new ways to improve battery efficiency.

Krasheninnikov noted that, while simulation has made big strides over the last decade, there is still room for improvement. The team can effectively run first-principles simulations of 1,000-atom systems over periods of time to observe short-term (nanosecond time scale) material interactions. Larger core counts on next-generation supercomputers will allow researchers to include more atoms in their simulations, meaning that they can model more realistic and meaningful slices of a material in question.

The greater challenge, according to Krasheninnikov, relates to how long researchers can simulate material interactions. In order to study phenomena that happen over longer periods of time, such as how stress can form and propagate a crack in metal, for example, researchers need to be able to simulate minutes or even hours to see how the material changes. That said, researchers also need to take extremely small time steps in their simulations to accurately model the ultra-fast atomic interactions. Simply using more compute cores allows researchers to do calculations for larger systems faster, but cannot make each time step go faster if a certain “parallelization” threshold is reached.

Breaking this logjam will require researchers to rework algorithms to more efficiently calculate each time step across a large amount of cores. Krasheninnikov also indicated that designing codes based on quantum computing could enable simulations capable of observing material phenomena happening over longer periods of time—quantum computers may be perfect for simulating quantum phenomena. Regardless of what direction researchers go, Krasheninnikov noted that access to supercomputing resources through GCS and PRACE enables him and his team to keep making progress. “Our team cannot do good research without good computing resources,” he said.