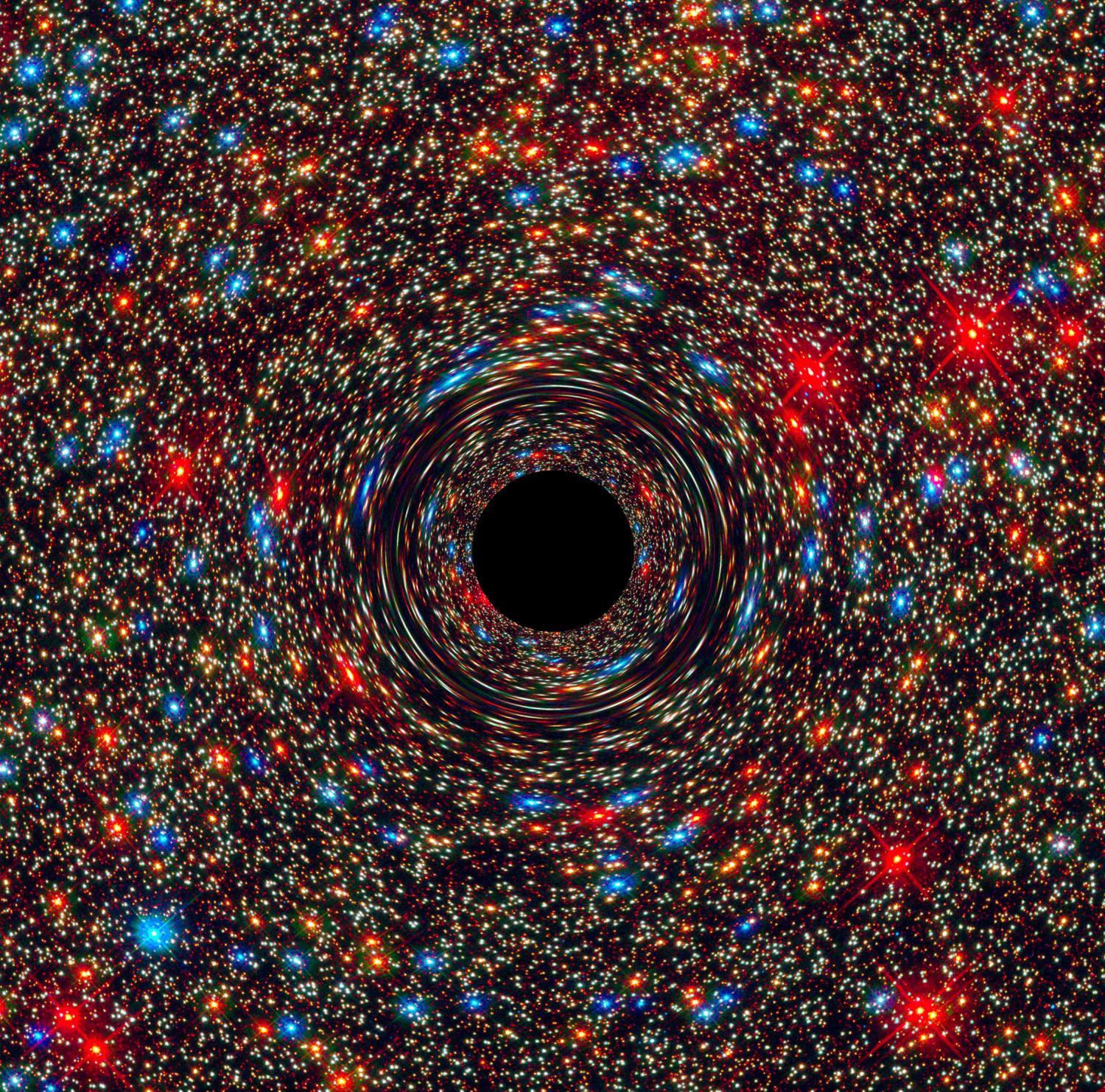 This computer-simulated image shows a supermassive black hole at the core of a galaxy. The black region in the center represents the black hole’s event horizon, where no light can escape the massive object’s gravitational grip. The black hole’s powerful gravity distorts space around it like a funhouse mirror. Light from background stars is stretched and smeared as the stars skim by the black hole. (Credit: NASA, ESA, and D. Coe, J. Anderson, and R. van der Marel (STScI))

The Big Bang has captured our imagination like no other theory in science: the magnificent, explosive birth of our Universe. But do you know what came next?

Around 100 million years of darkness.

When the cosmos eventually lit up its very first stars, they were bigger and brighter than any that have followed. They shone with UV light so intense, it turned the surrounding atoms into ions. The Cosmic Dawn – from the first star to the completion of this ‘cosmic reionization’, lasted roughly one billion years.

“Where did these stars come from? And how did they become the galaxies – the Universe teeming with radiation and plasma – that we see today? These are our driving questions,” says Professor Michael Norman, Director of the San Diego Supercomputer Center and lead author of a new review published in Frontiers in Astronomy and Space Sciences.

The Universe in a Box

“We have spent over 20 years using and refining this software, to better understand the Cosmic Dawn.”

To start, code was created which allowed formation of the first stars in the universe to be modeled. These equations describe the movement and chemical reactions inside gas clouds in a universe before light, and the immense gravitational pull of a much larger but invisible mass of mysterious dark matter.

“These clouds of pure hydrogen and helium collapsed under gravity to ignite single, massive stars – hundreds of times heavier than our Sun,” explains Norman.

The very first heavy elements formed in the pressure-cooker cores of the first stars: just a smidgen of lithium and beryllium. But with the death of these short-lived giants – collapsing and exploding into dazzling supernovae – metals as heavy as iron were created in abundance and sprayed into space.

Equations were added to the virtual Universe to model enrichment of gas clouds with these newly formed metals – which drove formation of a new type of star.

“The transition was rapid: within 30 million years, virtually all new stars were metal-enriched.”

This is despite the fact that chemical enrichment was local and slow, leaving more than 80% of the virtual Universe metal-free by the end of the simulation.

“Formation of metal-free giant stars did not stop entirely – small galaxies of these stars should exist where there is enough dark matter to cool pristine clouds of hydrogen and helium.

“But without this huge gravitational pull, the intense radiation from existing stars heats gas clouds and tears apart their molecules. So in most cases, the metal-free gas collapses entirely to form a single, supermassive black hole.”

From stars to galaxies

“The new generations of stars that formed in galaxies are smaller and far more numerous, because of the chemical reactions made possible with metals,” Norman observes.

The increased number of reactions in gas clouds allowed them to fragment and form multiple stars via ‘metal line cooling’: tracts of decreased gas density, where combining elements gain room to radiate their energy into space – instead of each other.

At this stage we have the first objects in the universe that can rightfully be called galaxies: a combination of dark matter, metal-enriched gas, and stars.

“The first galaxies are smaller than expected because intense radiation from young, massive stars drives dense gas away from star-forming regions.

“In turn, radiation from the very smallest galaxies contributed significantly to cosmic reionization.”

These hard-to-detect but numerous galaxies can therefore account for the predicted end date of the Cosmic Dawn – i.e., when cosmic reionization was complete.

Thinking outside the box

Norman and colleagues explain how some groups are overcoming computing limitations in these numerical simulations by importing their ready-made results, or by simplifying parts of a model less relevant to the outcomes of interest.

“These semi-analytical methods have been used to more accurately determine how long massive metal-free early stars were being created, how many should still be observable, and the contribution of these – as well as black holes and metal-enriched stars – to cosmic reionization.”

The authors also highlight areas of uncertainty that will drive a new generation of simulations, using new codes, on future high-performance computing platforms.

“These will help us to understand the role of magnetic fields, X-rays and space dust in gas cooling, and the identity and behavior of the mysterious dark matter that drives star formation.”