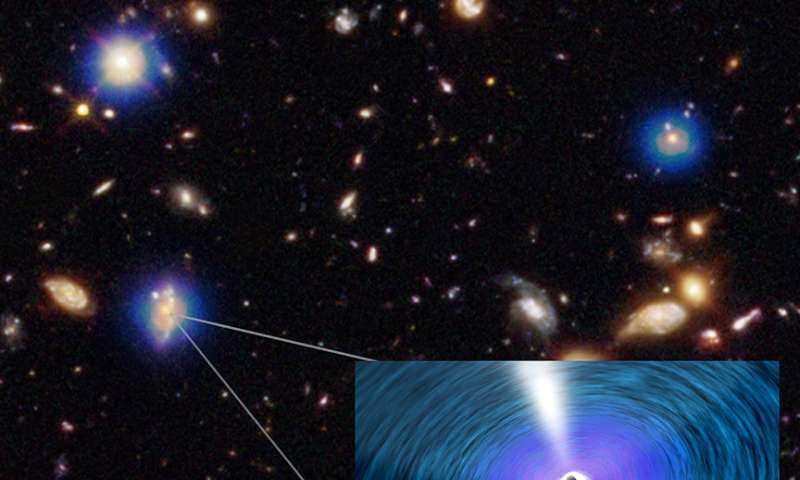 The growth of the biggest black holes in the Universe is outrunning the rate of formation of stars in the galaxies they inhabit, according to two new studies using data from NASA’s Chandra X-ray Observatory and other telescopes and described in our latest press release.

In this graphic an image from the Chandra Deep Field-South is shown. The Chandra image (blue) is the deepest ever obtained in X-rays. It has been combined with an optical and infrared image from the Hubble Space Telescope (HST), colored red, green, and blue. Each Chandra source is produced by hot gas falling towards a supermassive black hole in the center of the host galaxy, as depicted in the artist’s illustration.

Using large amounts of data from Chandra, HST and other observatories, Yang and his colleagues studied the growth rate of black holes in galaxies at distances of 4.3 to 12.2 billion light years from Earth. The X-ray data included the Chandra Deep Field-South and North surveys and the COSMOS-Legacy surveys.

Another group of scientists, led by Mar Mezcua of the Institute of Space Sciences in Spain, independently studied 72 galaxies located at the center of galaxy clusters at distances ranging up to about 3.5 billion light years from Earth and compared their properties in X-ray and radio waves. Their work indicates that the black hole masses were about ten times larger than masses estimated by another method using the assumption that the black holes and galaxies grew in tandem.